For 35 consecutive years, the three of us have been going to texas rangers spring training together. When people first learn of this, their response is one of the following: 1) That’s cool, 2) Why? or 3) That can’t be true. The correct answer is 3. We did begin in 1984, but two of us, John and Dave, missed two springs, ’03 and ’04. (Eric, because he works as a radio broadcaster for the Rangers, pretty much has to show up every year.) Anyway, we still say it’s 35 years. Come the second week of March, it will be 36.

“Why?” is a reasonable response, given the largely painful history of the Rangers. But the fact is that spring training doesn’t count. Wins and losses in March do not matter; for a Rangers fan, that is highly seductive. Yogi Berra first coined the phrase “Hope springs eternal.” (Not really. Though Yogi did once instruct his players, prior to a spring training drill, “Pair off in threes.”) The point is, at spring training, baseball is all about hope, imagining that the best is yet to come. And for us, in truth, spring training is only tangentially about baseball. It is just as much about food, music, and laughs.

Our first spring training together, in 1984, was in Pompano Beach, Florida, the team’s original spring home. This was back when you could stand behind home plate at the junior-high-size chain-link backstop and watch batting practice. Back when you could walk into the Laughing Fish pub and find Rangers manager Doug Rader at the bar with a middle-aged man smoking a cigarette and drinking a cocktail and dressed in all black except for a white belt and white shoes. Said John to Eric, “Who’s the guy talking to Rader?” “That,” said Eric, “is our opening day pitcher.” And then you could talk to Charlie Hough for a while and decide he was your favorite player.

This was back when you could hang out at the “picnic area” down the first-base line with the Mickey Rivers family, and with Oddibe McDowell’s mom. John (to Mrs. McDowell): “How did you come up with that name for him?” Mrs. McDowell: “Oh, I always liked the name Oddibe.”

The joys of Pompano were many. There was the great Larry’s Ice Cream, where the counter guy, a rightfully proud fellow not named Larry, would respond to our every choice of flavor, every time, with a loud “Excellent selection!”—a phrase that remains today in our personal vernacular. Eric: “I bought a Mazda.” John: “Excellent selection!”

There was Tim Hortons, purveyor of Timbits, irresistible powdered doughnut nuggets. Dave (walking in Hortons’ parking lot at 2 am): “Eric, toss me one of those Timbits.” Eric: “Sure.” (Fires a Timbit at 74 mph, hitting Dave in the neck.) By the time the Great Timbit War was over, our black Mustang convertible (we’ve always rented a convertible, of course) was white-polka-dotted, and remained so for the duration of our visit. (We were young. OK, youngish.)

In 1987, the Rangers moved their spring site to Port Charlotte, on Florida’s Gulf Coast. We were initially discouraged to learn that the residents here constituted the oldest-age-per-capita county in the nation. Our first lodging there in Seniorland was in a development called Palm Island, which was nice except that it was an actual island so the only way to reach it was by boat. The last boat back left at midnight, which was not a good arrangement for us. Invariably we would arrive dockside and jump aboard just in time. In our overly social state, we liked to serenade our fellow passengers nightly by singing “Palm Island” to the tune of “Moon River.” The lyrics varied, as did the audience appreciation.

In need of a habitat more suited to our habits, we settled in Englewood Beach, in a beachfront condo. From the wraparound deck we spent many productive hours watching white-haired locals patrolling the beach with their metal detectors. John (ruefully): “That’s going to be us someday, Dave.” Dave (cluelessly): “Yeah sure, John, like we’ll still be coming to spring training in 30 years.”

The ballpark at Port Charlotte was much appreciated for one curious feature. From the press box was a ladder leading to a hatch that opened out to the roof, where a good number of the North Texas reporters chose to gather, usually shirtless, sometimes badly sunburned. Here, as the game progressed, the generally acknowledged dean of the roof, Randy Galloway, would hold court, along with such local baseball luminaries as Tim Kurkjian, Jim “Revo” Reeves, Phil Rogers, and Norm Hitzges, all throwing around excessive wit, absurd conjecture, and wild clubhouse rumor. Has there ever been a more entertaining place to watch a baseball game? No.

Among the culinary delights of the area (we have never cooked a meal) was Charlie’s Raw Bar, home of the finest chicken wings we’ve ever had—and we’ve tasted thousands. At the time, in an impressive macho display, we liked to order our wings as hot as possible. This always proved problematic for Dave, who can break a sweat looking at a picture of a bowl of soup. By midway through the wings, he would be drenched, surrounded by piles of damp napkins. After our first few meals at Charlie’s, our waitress greeted us at the table with menus and a white towel, which she tossed to Dave. “Here you go, Popeye,” she said. (Apparently Popeye sweats a lot?) Dave’s Towel was thereafter a quaint spring tradition.

In walking distance from the condo was Calico Jacks, a busy bar where every customer was required to smoke two packs of cigarettes and drink 20 beers, and where the house entertainment was the Smoked Mullet Band, whose music was every bit as refined as their name. It was a nearly unbearable place, and we went there most every night. 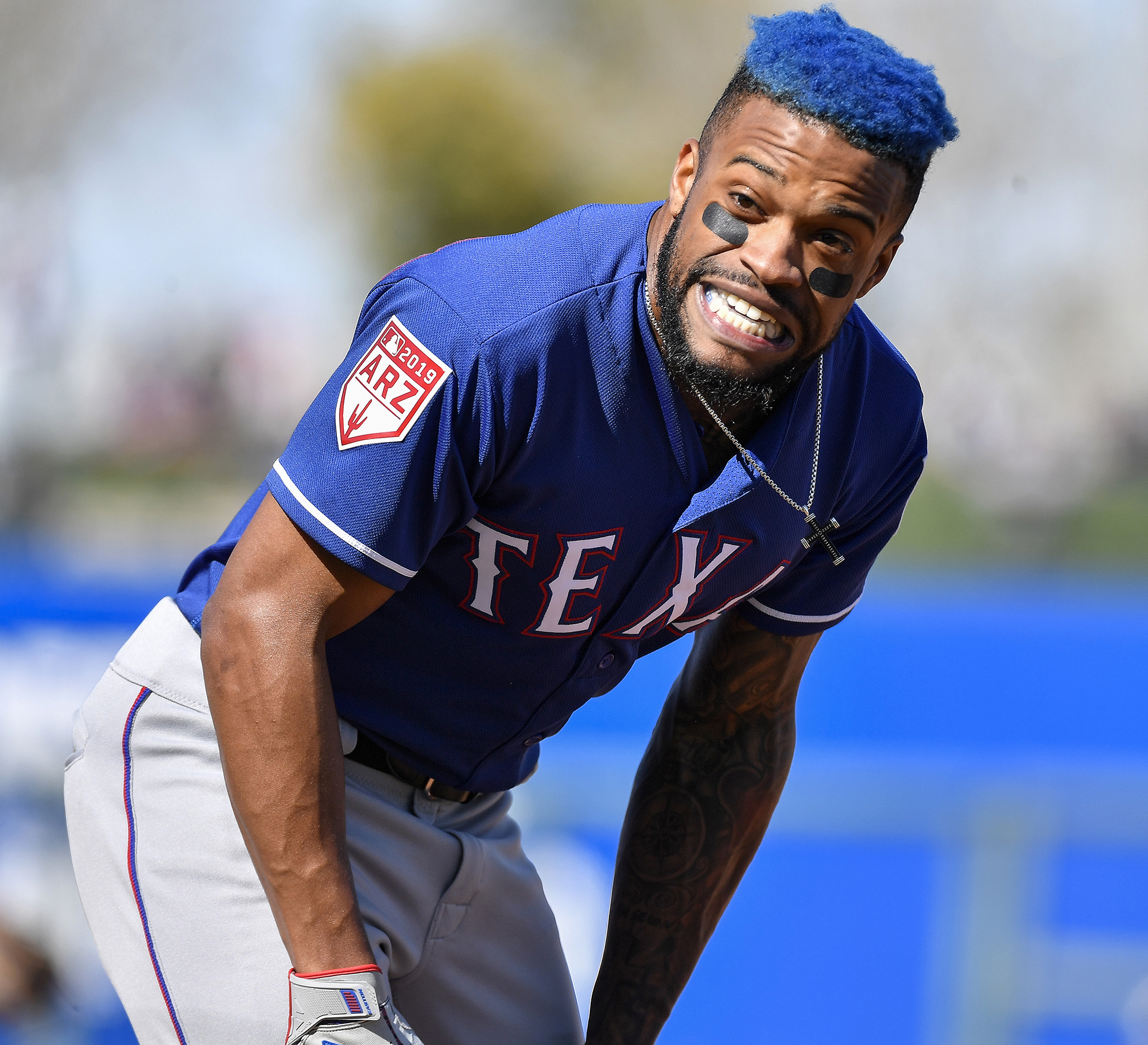 Delino DeShields, not happy about being called out during spring training this year in Surprise, Arizona. (John Sleezer/Kansas City Star/TNS)

Then disaster struck. The Rangers announced that in 2003 they were moving their spring home to Surprise, Arizona. No! No roof! No Charlie’s! Worst of all, no beach! Because none of us are golfers, Phoenix was thereby rendered a wasteland. For two seasons, John and Dave did not go to spring training, while Eric, who had no choice, assessed the situation. The withdrawal was severe. Bodily rhythms were upset. Mental health was an increasing concern. In the spring of 2005, our holdout ended and we went to Phoenix, specifically to a rental house in Sun City West, which is near Surprise, which is near nothing. The house, owned by a nearly mythical unseen figure named Gladys (Eric: “Gladys wouldn’t like that.” John and Dave: “Sorry.”), has a pool, but in March, even in Arizona, the water is too cold for swimming. The yard, like all the yards there, is rocks, not grass. The ballpark is nice enough, but is unredeemed by anything like “the roof.” We are left to sit in “seats.”

Nevertheless we’ve made the adjustment. We’ve had to. It’s spring training. We need it. We have rallied ’round the grapefruit tree growing in Gladys’ back rocks. We have found the fabulous Rhythm Room, where the music is incomparably superior to that of the Smoked Mullets. We have eaten well.

And let’s state the obvious: we’re 30-something years older now—even though we often fail to grasp this. But the signs are there. John still gets an erratic “suntan,” but he’s more careful now not to let his splotches burn. Eric has taken to exotic diets of inedibles; for his game-day lunch, he takes to the radio booth a plastic bag of raw broccoli chunks. (As Nolan Ryan once observed to us, “You know, ol’ Eric, he has some weird eatin’ habits.”) Dave and Eric now spend more time “researching” their fantasy baseball team that John increasingly ridicules. We watch more March Madness on TV. (Well, not Eric, a hoops-hater who, from the kitchen where he’s guzzling almond milk, likes to repeatedly yell out, “Who’s on the bubble?”) We read books. We smoke cigars outside at sunset.

It’s different, but it’s the same. It’s still about baseball as a good excuse to spend a week of easy time together. It’s about a friendship that has lasted even longer than 35 years. So, yeah, we’ll probably just keep doing it.

Eric Nadel has been the radio voice of the Rangers for 40 years. David Bauer is the former deputy managing editor of Sports Illustrated. John Hall is a Dallas adman and designated driver.