You can hear the cacophony of overlapping voices and frantic button mashing from across the room. The players stand shoulder to shoulder, unblinking in the glow of their screens, yelling, “We need more berries!” and, “I’m going full snail!” and, “Get the queen!” Then five players simultaneously whoop so loudly that everyone in the arcade turns around. Enthusiastic high-fives are exchanged. Their five opponents slump in despair.

It’s a Monday night at Bishop Cidercade, in the Design District, and people are here to play Killer Queen, a one-button, one-joystick, bee-themed video game owned by only a few arcades across the country. The game play is reminiscent of Joust, the graphics are Super Mario Bros. flavored, and the strategy is a little like StarCraft. It’s difficult to master, but anyone can walk up and start playing. “The beauty of the game is that you can learn it in 10 minutes,” says Eduardo Gabriel Martinez Banda, one of the best Killer Queen players in Texas. 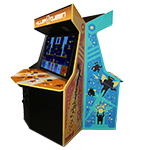 The Cidercade meetup is Killer Queen Dallas-Fort Worth (KQDFW), a few dozen twenty- to thirty-somethings who convene at a couple of North Texas arcades to hone their skills. But Monday night tournaments at Cidercade are especially centered on inclusivity. Everyone, of any skill level, is welcome to sign up and play.

This is how Chris Hailey met Kaitlyn Pace. Chris, whose nickname is Big Nasty (although he’s actually trim and winsome), moved to Dallas two years ago from Mississippi. After a year in town, he still didn’t have any friends and was curious to check out a “big-city arcade.” He visited Cidercade and found that he had a knack for Killer Queen. Before long, he was attending the Monday night meetups. Enter Kaitlyn: a petite actuarial science graduate student. In May 2019, she celebrated her birthday with a few rounds of drinks and Killer Queen.

“She got real close to me,” Chris says, remembering how she put her face next to his during the game.

“That was about camaraderie,” Kaitlyn says.

At meetups, Chris noticed Kaitlyn staring at him—a lot. They grew closer as they attended concerts, board game nights, and other outings with members of the burgeoning KQDFW community. By mid-June, Kaitlyn and Chris were a couple. “Killer Queen brought us together,” she says.

This social aspect of Killer Queen is deeply entrenched in its design. One of the most interesting things about the game is how it takes the notion that video games create antisocial, basement-dwelling behavior and flips it on its head. Killer Queen is inclusive, infinitely replayable, not online, and no fun alone—elements that have helped it garner a cultlike following that transcends age, race, gender, and income.

The game was created by Nikita (“Nik”) Mikros and Joshua DeBonis, two video game developers who first launched Killer Queen as an outdoor field game. It gained notoriety, and they decided to convert it into a video game that they believed would be promotional. “We didn’t see it as a commercial venture because it has so many players,” Nik says. In 2013, the two constructed an arcade cabinet version of Killer Queen for a festival and were surprised when hundreds of people clamored to play. Today, Nik and Josh are the co-founders of BumbleBear Games, a Brooklyn-based developer with seven employees. Their mission statement: “BumbleBear makes games for smart people to play together in public spaces.”

For Nik, Killer Queen hearkens back to a time when teens socialized in arcades and adults met for weekly bowling leagues. He says that the size of the machines—that is, the physical proximity required between players—was as intentional as the screens that instruct players to “Meet Thy Neighbor.” “We’re social animals,” Nik says. “We need to interact with each other to stay healthy. We’re not really that different from bees.”

The game’s website advertises to bars and arcades, stating that Killer Queen, set up “under the right conditions,” can bring in $1,000 a week. A cabinet pair (you need two machines, each of which supports five people, to play) sells for around $15,000, and there are about 150 of them scattered across the country. States like California, New York, and Texas have clusters of machines; Nebraska, Wyoming, and Louisiana don’t have a single cabinet within their borders. It isn’t unusual for players to travel between cities in search of Killer Queen scenes.

When it comes to play, strategy and communication are equally important. There are three ways a team can win: one, you fill your hive with berries; two, you ride the giant snail into your goal; three, you kill the opposing queen three times. If that sounds complicated, imagine trying to win without speaking to any of your four teammates.

Eduardo, who’s tall with curly hair, is something of a scholar of the game. He’s a five out of five on KQDFW’s skill-rating scale and a student of strategy. You need only ask and he’ll load you down with videos to watch, Twitch streams to follow, and tactics to try. Then there’s Rosalinda Olivares, for whom expanding KQDFW membership is her “single biggest objective.” She’s a “scene mom,” one of the leaders of the community, and she helps preside over the meetups at Cidercade.

“We were total strangers,” Rosalinda says. “But as we continued to meet up on Mondays, we became more aware of who these other people were. Then it became more than just playing a game. It flourished into friendship.”

It isn’t unusual for players to travel between cities in search of Killer Queen scenes.

Eduardo and Rosalinda discovered the Killer Queen scene in mid-2018. It was a fun pastime they could share as a couple, and they began attending the weekly meetups at Cidercade. After a trip to Austin uncovered a robust Central Texas Killer Queen scene, Eduardo studied their techniques and brought them home to share with his own community. Then he set about practicing—a lot. “At one point, I went to the arcade 30 days in a row,” he says. Once Eduardo became a dominant force in Dallas, he felt compelled to travel to other communities, learn from other players, and represent North Texas at a national level.

In mid-October, 11 members of KQDFW traveled to Chattanooga, Tennessee, for the fourth annual Bumble Bash. There was a tournament, a concert, panels, games, and sightseeing opportunities. And perhaps best of all, there were 17 Killer Queen cabinet pairs, all set to unlimited free play. Eduardo relished facing off against some of the game’s best strategists. Rosalinda attended a workshop on how to grow a local scene. Despite almost missing their flight, it was Chris and Kaitlyn’s first-ever trip as a Killer Queen couple. Rosalinda kept the people back home updated via Facebook. And in a gesture of KQDFW solidarity, two members of the community posted photos of their new tattoos: the Killer Queen logo encased in the shape of Texas.

“Killer Queen is family,” Eduardo says. “It’s who we spend all our time with, because we all have an obsession with this one-button, one-joystick, dumb bee game.”

The weekend of Bumble Bash was a blur. On the last morning, Nik passed a New York player in the lobby who looked like death. “I stayed up all night,” the guy lamented. And at the very end, Rosalinda practically had to drag Eduardo away from the game so they could make their flight home.

After the trip, Eduardo and Rosalinda were exhausted. Their voices were scratchy and spent. But they went straight from the airport to Cidercade. They left their suitcases in the car and entered the arcade, where members of KQDFW were already tapping buttons and yelling about snails and berries. Kaitlyn, running on three hours of sleep and punchy from the exam she’d flown back early to take, was there. Chris, who still had a Killer Queen temporary tattoo on his face, stood beside her, ready to play.

It was Monday night, and this was where they were supposed to be.