On April 11, 2011, Jeana Johnson and Colleen O’Hare, Dallas chefs and owners of Good 2 Go Taco, left their hotel in the Old Quarter of Hanoi and walked to meet their traveling companions. As they looked at a street map, they turned down an eerily dark alley lined with women in conical straw hats selling eels and snails. They were both still a little jetlagged from the trip and startled by their dining experience the previous evening. A rat had run out of the restaurant’s kitchen and stood up prairie-dog style in the middle of the dining room.

“Nobody moved,” Johnson says. “It’s like he came out to check on the customers.”

But today, the group of five was scheduled to rendezvous at 9 am in front of the motorcycle touring company they’d hired to lead them on a three-and-a-half-week journey through Vietnam. A series of conversations in Dallas months earlier had led them here, discussions centering on what they could do to push themselves out of their comfort zones. They wanted a life-changing expedition that would lessen their fears of taking chances in their careers. To challenge their egos and anxieties, they chose to navigate motorcycles across the mountainous regions of Vietnam. 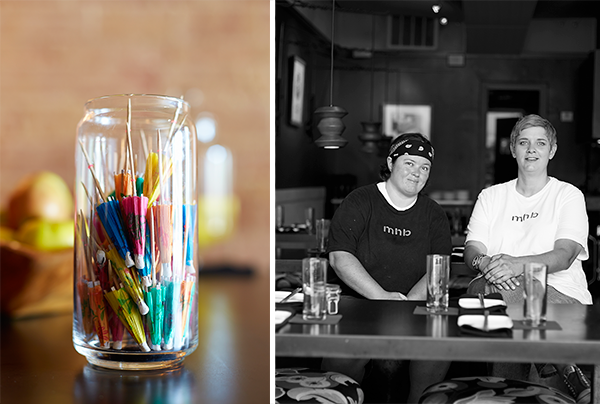 Head Noodles: O’Hare and Johnson
Walking to the end of that narrow alley, Johnson and O’Hare found the tour company. As soon as their friends showed up, two guys speaking broken English brought out five motorcycles patched together with duct tape. They looked at the five Americans and said, “Let’s go.”

Minutes later, the group was in a mosh pit of traffic in downtown Hanoi, surrounded by thousands of scooters, some carrying a family of five, a dog, and groceries. Small cars and bikes weaved around them and forced them to separate. Johnson was horrified. She was bumped several times before she’d driven two streets.

“None of us had had time to get a feel for the bike,” Johnson says. “Trying to figure out the dynamic of the motorcycle and the traffic at the same time, while trying to stay close to the group was terrifying. Had someone had an accident, we would have all gone down like bowling pins.”

The chaos ended as suddenly as it began. Once they cleared the city, they found themselves alone and surrounded by lush fields of tea plants. “If we’d taken a bus or train, we’d have spent most of our time talking to each other,” Johnson says. “On motorcycles, we could feel the temperature change as we climbed a mountain or smell fresh bamboo getting chopped up in a chopstick factory. Every sense of your body is overloaded with everything the country has to offer.”

They fell hard for the beauty and the food of Vietnam.

Johnson and O’Hare returned to Dallas and Good 2 Go Taco. (Their combined résumés include Goodfriend Beer Garden & Burger House, Acme F&B, Daddy Jack’s, Ciudad, The Green Room, Stephan Pyles, and York Street.) The Vietnamese experiment had worked: both were deeply affected by their accomplishment. All they could think about was a way to get back.

The obvious choice was to open a restaurant. At Good 2 Go Taco, they proved that two white chicks could make Mexican street tacos. Trying to operate an authentic Vietnamese restaurant would certainly qualify as pushing their professional limits. To fuel their obsession, they spent their spare time cooking Vietnamese food, using the extensive notes, photographs, and videos they had assembled. They visited local Vietnamese markets, restaurants, and businesses. When Watel’s Bistro, located in the former York Street spot, closed, Johnson and O’Hare snapped it up and, just a few hours later, booked a return trip to Hanoi.

On April 24, 2013, Mot Hai Ba opened, an intensely personal restaurant dedicated to the flavor profiles of northern Vietnam. Most culinary historians cite Hanoi as the birthplace of pho, the national dish of Vietnam. You can find three varieties on the lunch menu, but Johnson and O’Hare’s approach to pho is gutsy. The surface of the dark broth shimmers from the gelatinous remains of boiled shin bones and is gently spiced with ginger, lemongrass, cassia bark, black cardamom, and star anise. A garnish plate filled with fresh herbs, bean sprouts, fresh lime, and red chilies encourages customization. But be warned: chances are your palate will take some time to adjust. There is not a note of the sweetness that permeates most bowls of pho sold around the world. At Mot Hai Ba, you can order the intense broth with braised brisket and tenderloin, poached chicken, or tofu and vegetables. It is deep and soothing and worthy of respect.

Johnson and O’Hare dare you to test your taste buds throughout the menu. Don’t ask for hoisin sauce because there isn’t one bottle in the restaurant. Do ask for the sumptuous banana flower salad. It is one of the most exciting dishes I’ve recently tried. Super thin strips of banana flower are mixed with chicken, peanuts, carrots, daikon, cucumber, green papaya, toasted black sesame seeds, and tiny bits of fried shallots, and tossed in a citrusy fish sauce-based dressing. Make sure you continually rotate the mixture, as the heavier ingredients sink to the bottom. 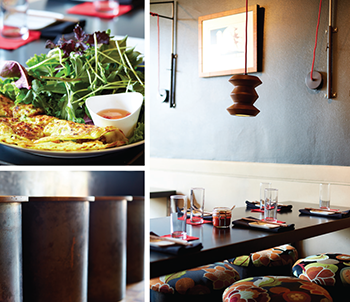 I tried the frog legs twice. The first time, the meat was mushy, and the tempura batter flavorless. The next time, the legs were firm, and fresh dill was visible in the dough. I picked apart the garnish of fresh purslane—an underused herb (some still refer to it as a weed) with a lemony taste—and added a tiny leaf to each bite just before dipping it in the flavorful fish sauce with daikon and carrot.

Fresh herbs are a huge component in most of the dishes. A platter delivered with a sizzling shrimp cake is garnished with a pile of soft herbs that include green leaf lettuce, Thai basil, opal basil, fish scale mint, bean sprouts, cilantro, Vietnamese coriander, red perilla, cilantro, and water spinach.  Our server advised us to use the lettuce as a base, add a slice of the warm tapioca and rice flour crêpe filled with shrimp, and experiment with different combinations of herbs. If you love food, you’ll appreciate the experience.

I really wanted to love the braised oxtail, but, both times, the dish disappointed. It was tasty but one-dimensional. The star anise was overpowering, and the broth lacked the depth of beefiness that you should get in a slow-cooked dish. The meat had a fatty, flabby texture, and there wasn’t enough broth to cover the rice noodles. I can appreciate the concept of the plain presentation, but it lacked the robustness to drive it home.

Fish specials, however, excelled. On one night, it was grilled grouper; on another, grilled yellow eye rock cod. Both were sauced with a splendid lemongrass, ginger, and fresh dill yogurt scented with turmeric. 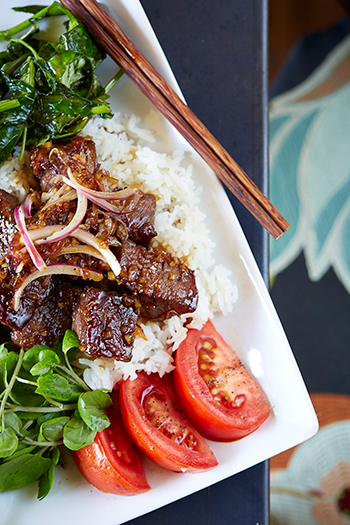 Shaking beef
The dish that motivates me to head to Vietnam, rent a motorcycle, and scour the back alleys of Hanoi to check the authenticity of the preparation, is the Bun cha. It’s a common street food in Vietnam, but at Mot Hai Ba, it’s an elegant rice noodle dish served in a deep mahogany broth filled with charred strips of grilled pork belly and soft pork meatballs. Flecks of carrots and char from the pork belly are the only other visible ingredients. It’s a spectacular contrast of rich flavors and brittle bites of pork belly against supple, soft poached pork. I called Johnson to get the details on the dish. I think I’d have better luck getting Edward Snowden’s phone number.

The interior, which seats 36, is also a tribute to their trip. Johnson and O’Hare carried back the now-chic Vietnamese propaganda prints that line the long wall of the restaurant. A painting they bought while searching for the enamel lampshades they fell in love with at a restaurant in Hanoi hangs behind the bar. The communal tables are low and lined with backless stools. In August, they added colorful cushions with coral, sage, light blue, and crimson circles and swirls to please the customers who complained about the hard surface. You’d never know the dramatic wooden pendant lights hanging from bright red rope were bought on clearance at West Elm. They look like they were pulled out of a roadside restaurant in Vietnam. The ambience is low-key and comfortable, not kitschy. And the outdoor patio, with another 22 seats, is a joy to behold on a cool summer evening.

The cocktails are limited to three sake concoctions. My favorite was the Dua Dua, pineapple-infused sake shaken with coconut cream, poured over ice, and served with a jaunty paper umbrella. The wine is a collection of what might be described as “petit” wines: a high proportion of relatively lower-rent Southern French offerings with bows to the gentry of Bordeaux and Burgundy, and a smattering of other regions of France. Even the Burgundy and Bordeaux are not the grand and glorious of the wine world, but rather the serviceable and accessible. Not Chateau Lynch-Bages, but instead Pauillac de Lynch Bages at $65, an affordable entrée to one of the storied winemakers in France.

The beer list is thoughtful. Several styles and countries are represented and pair brilliantly with the food, particularly the Blanche de Bruxelles, Saison Dupont, and Tripel Karmeliet. There is also fresh juice. Sadly, we never got to taste it. The night we ordered pear juice, the juicer was out of order.

Service is casual, friendly, and knowledgeable. Even when the room is full and waiting diners crowd the entrance, nobody encourages you to leave. But when you finally exit, be careful not to knock over the motorcycles that may be parked outside the front door. Johnson and O’Hare need them for their next adventure.