What do you want to know about Double Wide, the crazy little trailer bar with the tornado on top, just outside Deep Ellum? That the bartenders make a drink called the YooHoo Yeehaw with frozen YooHoo, coffee liqueur, and vanilla vodka that tastes like frozen whupass? That they are liable to wear red, red, red shoes or a Texas straw hat? That sometimes they come to work in drag for the hell of it? That they’re way courteous?

Maybe you want to know about the secret confessions night (Sundays and Mondays), when bar manager Khurk Maeder reads secrets out to the crowd that people write on guest checks, and comments on them as he goes. Or that Maeder’s favorite secrets are the revenge ones, like the time this contractor got ripped off and then stole the thief’s truck and drove it into the Trinity, never to be found again. Maybe I should tell you that Maeder has been there eight years, starting as a doorman and working his way up. That he sometimes takes the rind from a wedge of lime, scores the pith, bends it backward, and wears the scored pith like teeth.

Maybe I should say that he had never heard of PostSecret.com, the website that posts people’s brief confessions that can blow you apart with their grief, but that he had invented a game with some regulars that involved dares such as sticking your hand in the toilet or taking off your underwear and letting people pass it around the bar and that the game stopped only because they’d run out of things to do that weren’t going to get them in trouble. Maybe I should tell you that there’s a stage, a music venue, as well as the patio and the front bar with the crappy, comfortable stools and that sometimes, when the shows are big, they block off their small parking lot so more people can hear the music. Then again, sometimes they block off the parking lot and have a flea market. 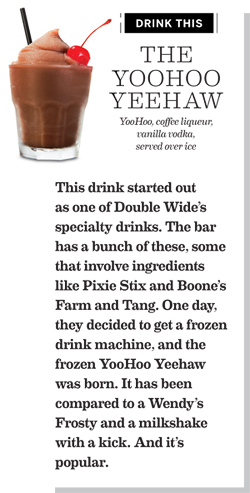 If it sounds strange to you—and some of it did to me, especially that toilet thing and that underwear thing—then it’s worth talking about the quieter pieces. If Wallace Stevens could find 13 ways of talking about a blackbird, then surely we can find two or three ways to talk about a bar. Maeder speaks respectfully of the teachers who come in and the older people who come in and chat—older like 60 or so (Maeder is 45). There’s a bottle of bug spray behind the counter at the bar. I returned it to its proper spot after a gray-haired man—maybe late 40s, in a plain, unironic t-shirt—sitting at the next table offered it to me, then explained that it belonged to the bar. T-shirt guy was with two women who both looked like someone’s mom, which is to say, comfortable, a contrast to some of the hipsters who were arriving for karaoke that would start later. I saw many maxidresses and ZZ Top beards on my first visit, and I wondered if Mohawks were back in. Some patrons come in costume, sometimes on one of the theme nights. The cool kids sit on seats made from old toilets with the lids put down and plants growing from the tanks.

Perhaps I should say this: I met an old friend at Double Wide I have known for 25 years. He is an art guy now, with gray flecking his temples. He brought along a sculptor who has a mountain man beard and had to wipe away clingy Guinness foam with a cocktail napkin. The three of us sat on the patio covered with graffiti. We talked about art that mingles death and curiosity with sculptures of deer and snails. (I saw the sculptures at the Nasher later. They are beautiful, exquisitely so. The beauty is complicated by the death.) But we sat there, the three of us borrowing the bug spray and talking about the art on the walls around us. There was no ceiling and so we could see night falling. Not just the stars but also the darkness between the stars.