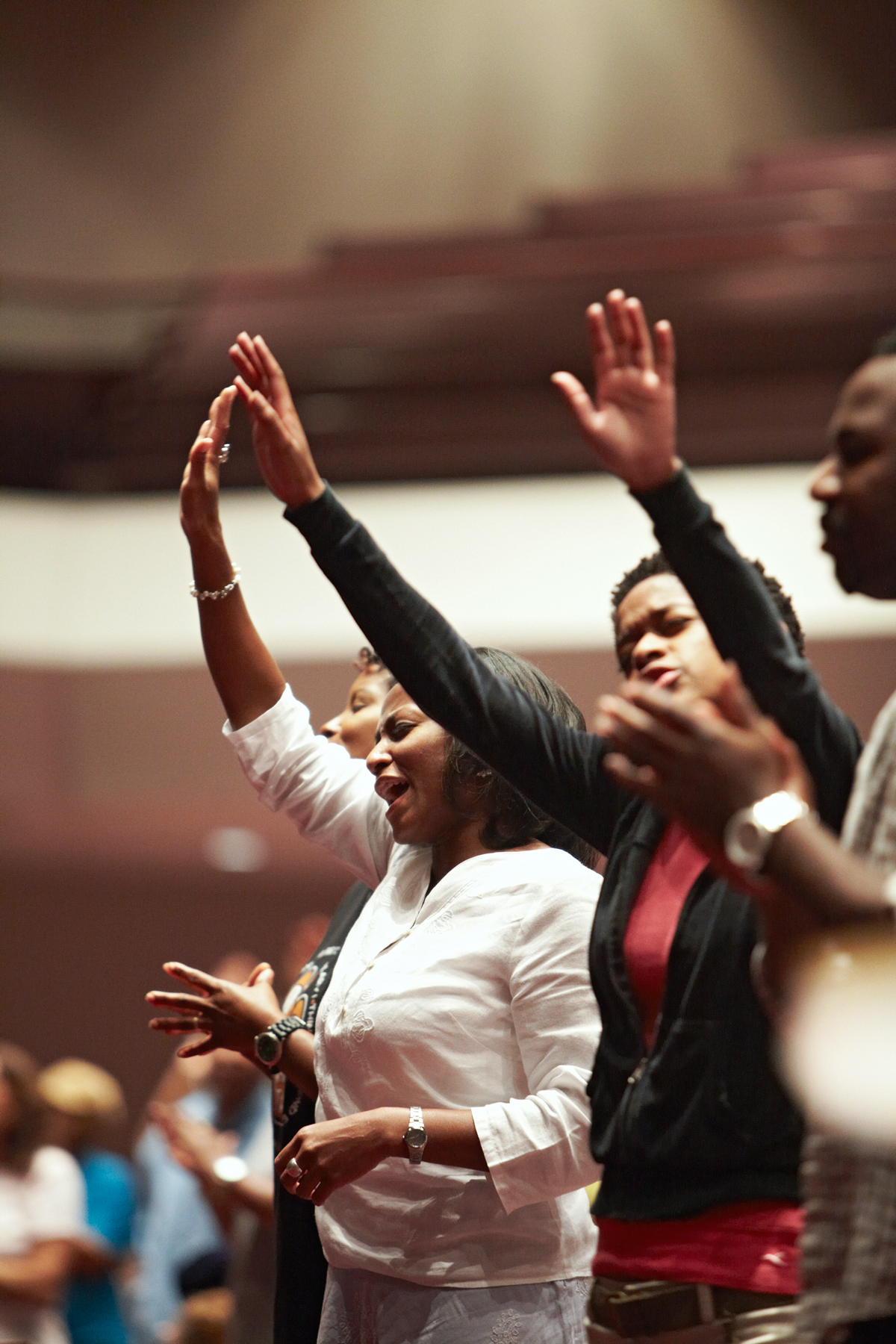 
Dr. Tony Evans and his wife Lois started Oak Cliff Bible Fellowship (OCBF) from their South Dallas living room in 1976. Since then Evans has expanded the national ministry to more than 40 countries. His weekly radio show, The Urban Alternative, made that possible. More than 500 stations carry it. OCBF’s congregation includes loyal listeners who relocated to Dallas for the sole purpose of attending the church. Now that’s a powerful message.

OCBF is considered a conservative congregation. Evans is closely aligned with former President George W. Bush, who helped dedicate the church’s education building in 2003 and credited one of Dr. Evan’s speeches as being an inspiration for his faith-based social policies. The Turnaround Agenda, formerly known as Project Turnaround, is an example of one such initiative. Through OCBF-affiliated mentors at 68 Dallas-area schools (Kimball, South Oak Cliff, Carter, Lancaster, Duncanville, and Cedar Hill), The Turnaround Agenda promotes abstinence, encourages students to graduate, and offers alternatives to drug and alcohol use and gang membership. 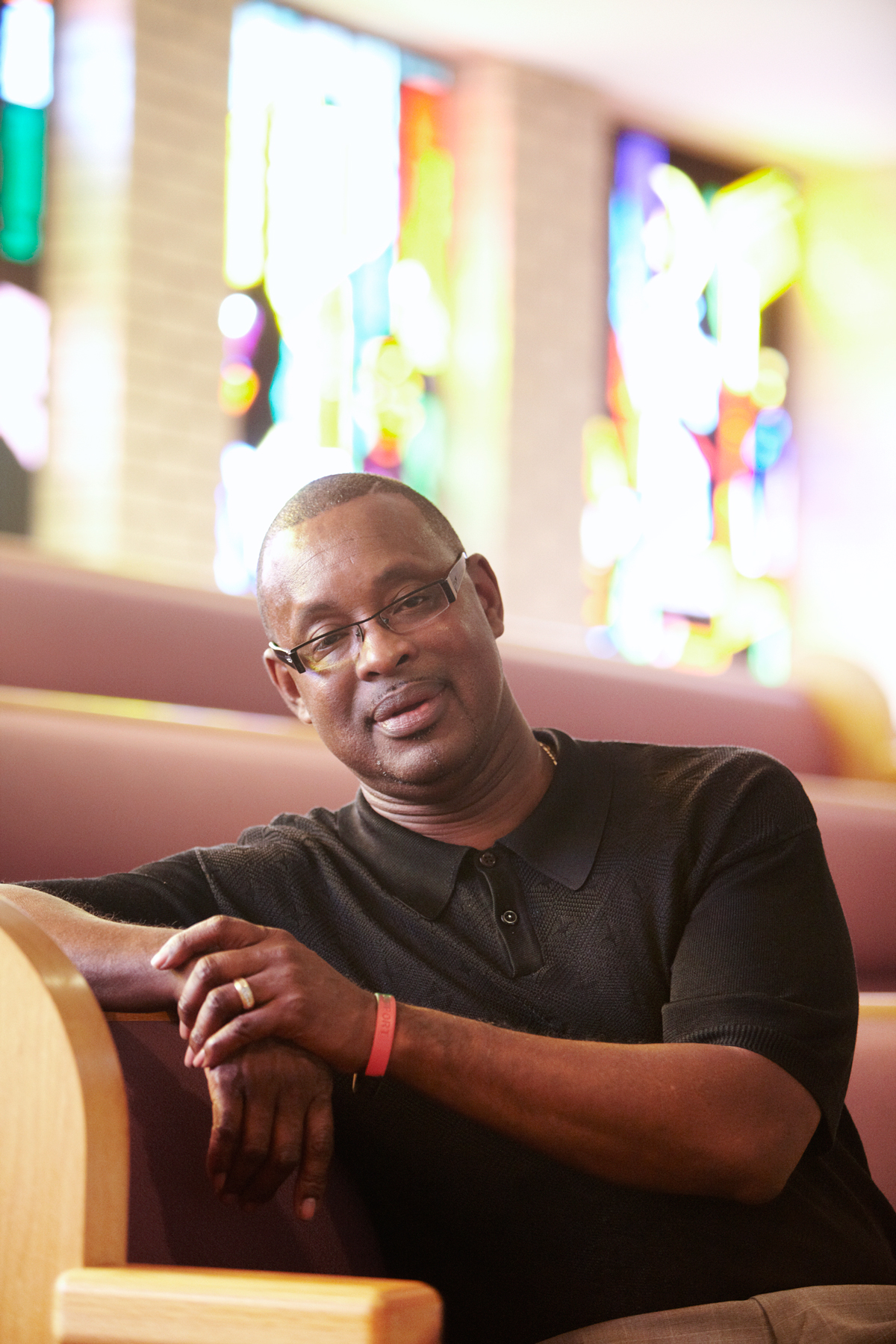 One of the oldest of Dallas’ mega-churches, St. Luke was founded in 1933. Its congregation is a strong and established community; many families have worshipped at the church for generations. This makes Pastor Tyrone Gordon something of a newcomer. Appointed to replace Dr. Zan Wesley Holmes Jr. in 2002, Gordon studied under Holmes at SMU’s Perkins School of Theology and was senior pastor of a church in Wichita, Kansas, before coming to St. Luke. Holmes left behind a legacy of civic engagement and cultural awareness that Gordon continues through programs such as the annual African Heritage Lecture series.

The mind and soul aren’t the only things fed by St. Luke. Methodism’s Breadbasket, a food pantry founded by the North Texas Conference of the United Methodist Church, is located on the church’s East Grand Avenue campus. It feeds more than 6,000 Dallas residents each week. Congregants also volunteer their time to minister to those with AIDS and those recovering from alcohol and drug abuse. 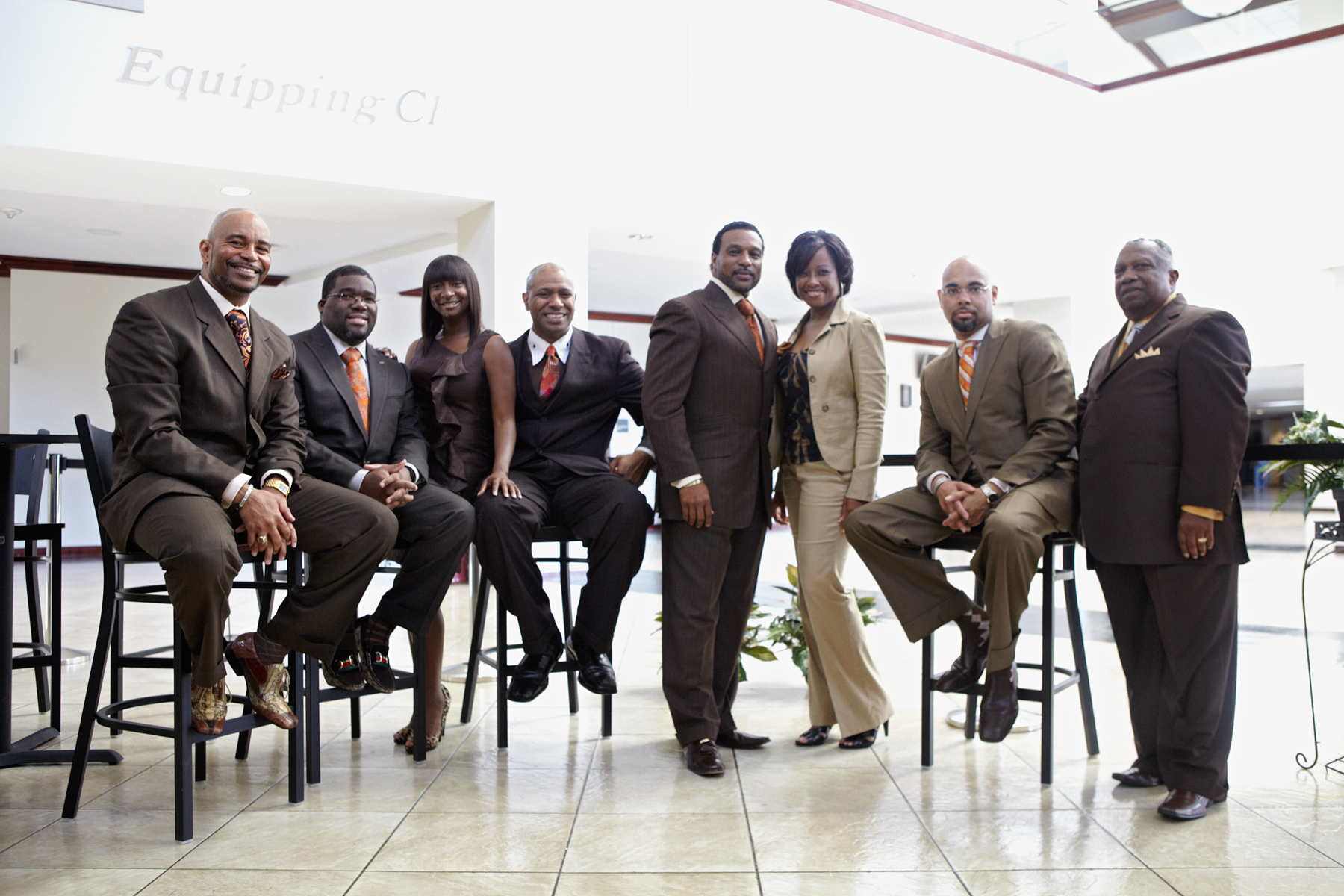 Depending on the service, you’re as likely to see a pew full of t-shirts as you are a row full of tailored suits at Friendship-West Baptist. All are encouraged to come as they are during either of the two Sunday services. But there is a difference. Early service is filled with “mature saints”; the under-40 set frequents the 10:45 am service. Dr. Frederick “Freddy” Haynes III ministers a message of civic action to both.

Under Haynes’ leadership, Friendship-West is grassroots in action but global in reach. Tithes support a church in Harare, Zimbabwe, which was recently constructed with an on-site school and daycare. St. Jude Children’s Research Hospital and post-Katrina revitalization in New Orleans are also beneficiaries of the church’s philanthropic efforts. At home, “The West” is working with Prairie View A&M University and minority farmers (through its Village Co-op Movement) to alleviate urban food deserts. The co-op supports a community garden, a greenhouse, and farmers market. 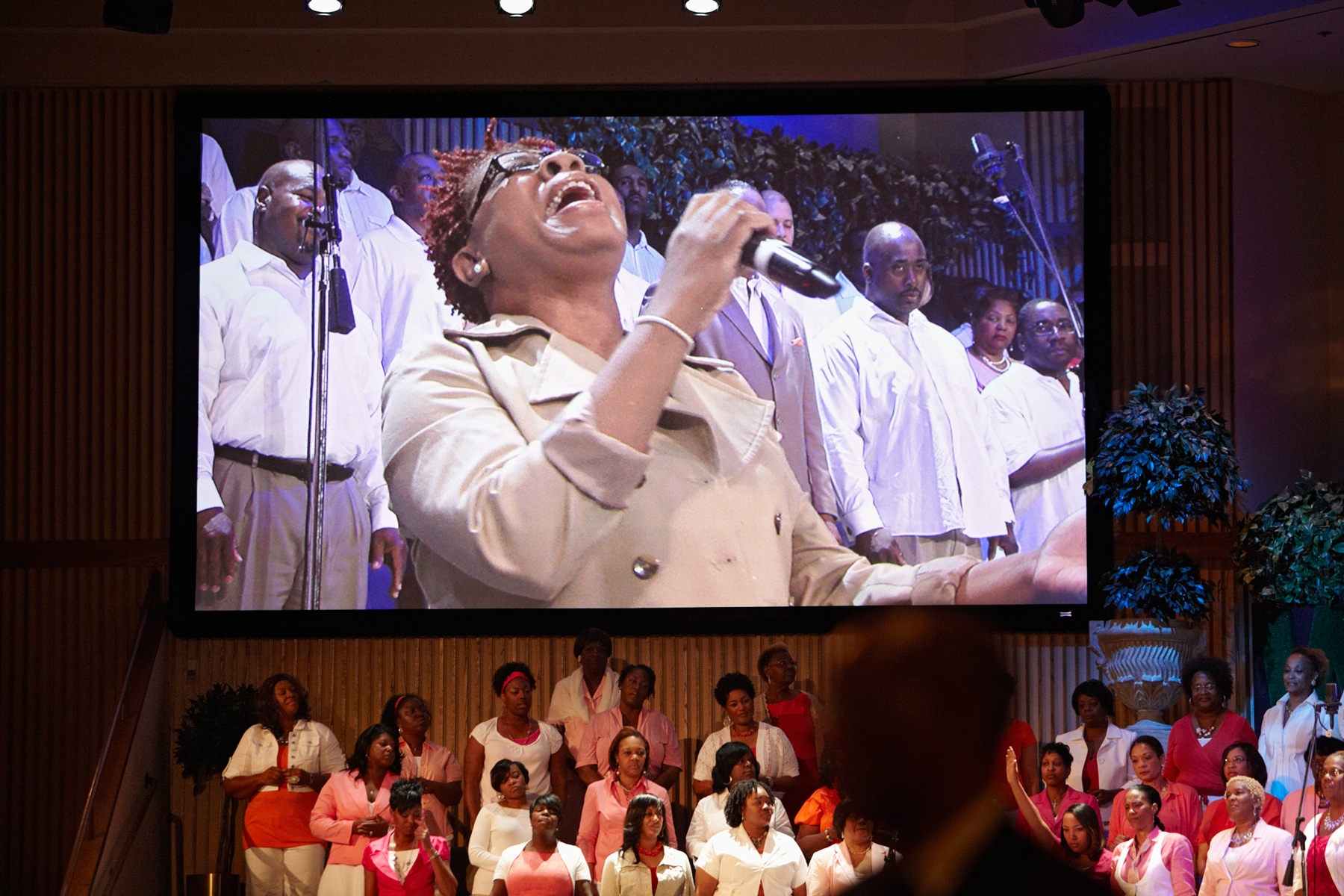 Dr. E.K. Bailey founded Concord Church in 1975 and moved the church to its current location (on the street that now bears his name) in 1997. When Rev. Bryan L. Carter succeeded Bailey as senior pastor after Bailey’s death in 2003, weighty expectations were placed on the young minister. Carter rose to the challenge, incorporating his contemporary approach to the gospel with Bailey’s more traditional message.

But while Carter honors Concord’s past, he has also moved it forward, tapping into pop culture and revamping its services to make his messages relevant to the church’s young membership. Can’t make the 7:30 am service to hear Carter preach “The Real Flavor of Love”? No problem. You can catch the 9:15 am, 11 am, or 12:45 pm version of the sermon—or watch it online via live stream. Carter’s overall goal is to encourage growth among his congregants. And that means reaching them both inside and outside the church’s walls. 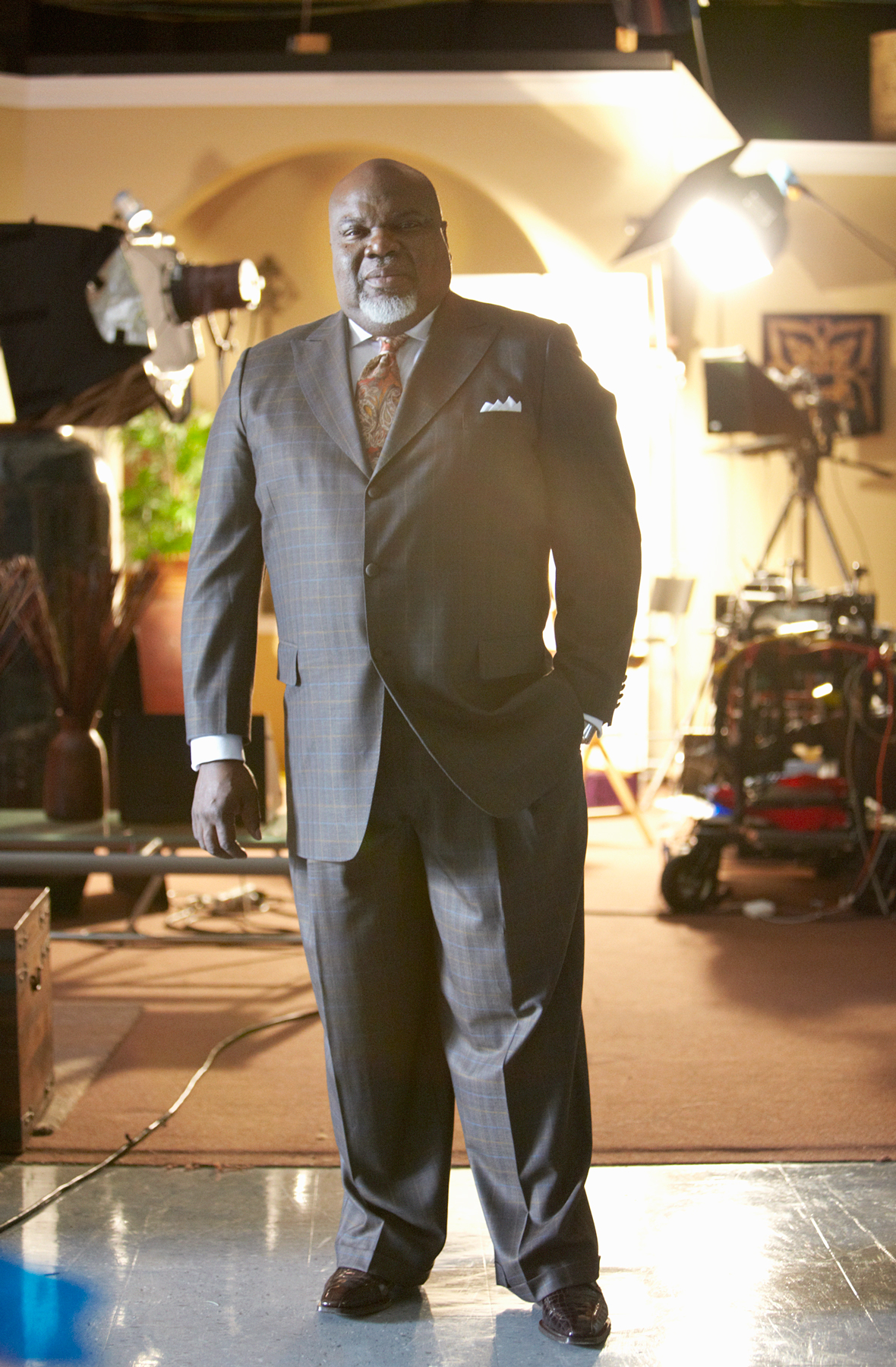 T.D. Jakes of The Potter's House. Photography by Sara Kerens
Photography by Sara Kerens
City Hall talks about economic development in predominantly black South Dallas. The Potter’s House (TPH) is actually making it happen. A prime example is Capella Park, a mixed-use community located across the street from the worship center, which TPH partners with. Home prices range from $190,000 to $240,000, and located within the community is Clay Academy, a Bible-based college preparatory school serving Pre-K3 through 8th grade.

But the impact of The Potter’s House goes well beyond its North Texas headquarters. Through its MegaCare Missions, TPH constructed a hospital in Belize and funded fresh water wells in Kenya. And the international popularity of its leader, Bishop T.D. Jakes, a man Time compared to noted evangelist Billy Graham in 2001, extends its reach to millions. Thanks to his New York Times best-selling books, regular appearances on Dr. Phil, and successful feature films such as Jumping the Broom, many consider Jakes the country’s preeminent black theologian.

While The Potter’s House is predominantly black, it has members from 21 nationalities, making the church one of the most diverse in Dallas. That diversity also applies to socioeconomics. You’re as likely to see Deion Sanders sitting in Sunday service as you are the guy who drives your DART bus route.

When was Masjid Al-Islam founded and why?

It was officially founded in 1968. Originally, it was called Mosque No. 48 of the Nation of Islam under the leadership of Elijah Muhammad. The Temple attempted to address the social needs of black people in the Dallas area during Jim Crow. The present location was bought and dedicated by our late leader Imam Warith Deen Muhammad in 1980. The mosque was dedicated to the practice of mainstream Al-Islam and to support and service the betterment of American society.

African-Americans make up the bulk of your membership. Why is that?

We have members and supporters from different nationalities and ethnicities. We’re based in South Dallas. The area is a traditionally black area. Also, African-Americans have an Islamic legacy in their heritage. A substantial percentage of Africans brought to these shores as slaves were Muslims. And many of our attendees were part of the original Nation of Islam before converting to the orthodox mainstream Islam in 1975 under the leadership of our late leader Imam Warith Deen Muhammad.

What inspired the mosque’s Feeding Our Neighbors program?

When the Quran defines righteousness, one of the factors mentioned along with belief in God is concern for the less fortunate members of society. We provide over 10,000 meals a year. We also provided free medical screening. Our outreach program is six years old, and it operates every Saturday and Sunday. The mosque also spearheads the biannual Humanitarian Day DFW with the help of Muslims, Christians, and civic and business communities from across the metro areas. That program provides free, new and used goods and a health fair. Our overall effort is called The Beacon of Light Community Center. Our mission is to serve everyone—without proselytizing. We are encouraged by the Quran to be a contributing element for the enhancement of society and to work with all people.

How does the mosque work with other congregations in the city?

We participate in interfaith gatherings. Since our inception, we have visited and spoken at more than 250 churches in town. We participated in Thanksgiving Square World Assembly. On November 30, 2010, we were part of Dallas Independent School District’s dialogue with African-American religious leaders. We have worked with the Dallas Peace Center and contributed to the dialogue with the interfaith coffeehouse. On September 11, 2010, we hosted 12 Christian and Jewish congregations at Masjid Al-Islam seeking unity, appreciation, and tolerance.

What is the one thing you’d like someone moving to Dallas to know about Masjid Al-Islam?

Dallas Masjid Al-Islam believes in the greatness of America. We feel honored to be part of this great nation. We denounce any harm done in the name of religion. Our congregation wants to help make Dallas the greatest city in America for all people. We respect and appreciate the sacredness of all religions.