In July, the city of Dallas’ Office of Cultural Affairs issued a request for proposals for a public art project at White Rock Lake. The request set out a list of “goals” for the project that ranged from the ambiguous (“The 100-year history of White Rock Lake must be a part of the design”) to the specific (“The desired vertical configuration must be tall enough to be highly visible from the adjacent roadway, Garland Road”). There was also a final, rather ambitious stated aspiration for the project: “The White Rock Lake Centennial Commemorative Sculpture must become an icon for the lake.”

If you are wondering who decided that White Rock Lake needed a giant, vertical sculptural icon, the answer may surprise you. The sculpture project was kick-started by Dallas Water Utilities. That’s because the city of Dallas’ public art commissions are governed by the Percent for Art Ordinance.

Adopted in 1988, the ordinance seems like forward-thinking cultural practice. Here’s how it works: part of the budget (1.5 percent) of each capital improvement project funded through a bond program is reserved for public art. The Office of Cultural Affairs’ public art division, working with the city department responsible for the capital improvement, determines a location for the art. Committees and panels consisting of constituents near the site are created to offer feedback. Those panels determine the goals of the project, and the proposal is then passed by the city’s Public Art Committee, which is a subsidiary of the Cultural Affairs Commission, the body that ultimately votes on each work.

The ordinance has fulfilled one of its goals: to commission tons of public art, including everything from bronze chimpanzee sculptures at the Dallas Zoo to the steel trolley wheel that was recently plopped in the Bishop Arts District. The problem, however, is that it is an ordinance that favors quantity over quality. Very little of the art it has produced is any good.

“Good” is a difficult term to define in art. One man’s garage sale painting is another’s Caravaggio. But recent decades have seen an evolution in public art practice that has contributed to public enthusiasm for it, says Jeremy Strick, director of the Nasher Sculpture Center. “I think there has been a significant shift in the last several decades to a greater appreciation for the importance of context,” Strick says. “I’m thinking about not only the physical properties of a site, but also the social context, who will be experiencing a work of art, what their expectations might be.”

One of the great successes of this kind of public art practice has taken place in Chicago’s Millennium Park. Anish Kapoor’s Cloud Gate (affectionately nicknamed The Bean) is both extremely popular and subtly brilliant. Bulbous with a polished, reflective surface, it engages viewers in a dynamic, multifaceted way.

The reason Dallas isn’t commissioning these kinds of projects is that artists are afterthoughts in the process. By the time a call for proposals goes out, size, scope, scale, location, and purpose are often already defined.

“The model has taken control of the art that is produced and put it in a system,” says Linnea Glatt, a Dallas artist who has been working on public projects in and outside of Dallas for decades. “I understand why. The funds are tied to the municipality. But it is a situation where the community sits down and decides where an artwork should go and what it should speak of.”

What artists do—their particular gift, talent, and job—is deal with context, content, and space. Yet with public art commissions, these decisions are handed over to committees, panels, and city departments. The relationship should be less akin to working with an interior designer (responding to a client’s stated needs or desires), Glatt says, and more of a two-way education between the artist and the community.

For some, however, the idea of turning public art over to artists and art curators conjures up a scenario where art world elites inflict their detached, aloof ideals on the unsuspecting public. The most infamous example of this kind of conflict involved Richard Serra’s Tilted Arc sculpture in New York City’s Federal Plaza, which was eventually removed after federal workers, who had to navigate the rather glum piece every day, protested. But there are plenty of instances in which works that were initially received halfheartedly have become embraced by the community, Strick says, including Maya Lin’s Vietnam Veterans Memorial and the Chicago Picasso. 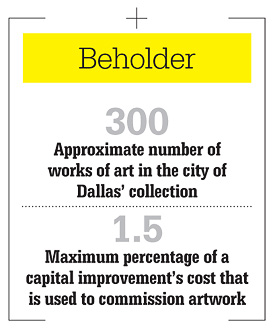 “There’s an aspirational function in elevating a community,” Strick says, “and I think that’s what successful artists do. They take things that we think we know and place them in a different light. They broaden and deepen our understanding.”

Dallas’ public art policy doesn’t really provide artists with that opportunity. One artist I spoke with off the record, who has worked on numerous public projects in the past, feels like the process caters to design and architectural firms, which are more adept at delivering made-to-order products to customers. Indeed, one of the city’s more recent commissions, the Ross Avenue Gateway Project, is an innocuous, aesthetically benign environment—lighted geometrical forms placed along a meandering, landscaped path—that was designed
by a landscape architect and a museum exhibit designer.

The ordinance, by design, creates many relatively small funds for specific works. It means the city will inevitably litter the landscape with lots of minor works, instead of focusing on a few high-quality ones.

There is one neighborhood group in West Dallas that is trying to address some of this. When David Lyles, president of the Fort Worth Avenue Development Group, discovered that the renovation of Beckley Avenue would create funding for public art through the Percent for Art Ordinance, he created an ad hoc committee made up of members of the neighborhood who also happened to be artists and art professionals. The group decided it wanted to commission a “significant” work of art for the area. But to do that, it would have to change both the language used in the request for proposals and how the project was funded.

“We didn’t want what you see coming down Singleton—plop art—something that wasn’t designed for the location,” Lyles says. “For us, it is important that the artist has the ability to define what goes there.”

Lyles and his group have forged some significant changes in the way the city handles its public art. Kay Kallos, who heads the city’s Public Art Program, was able to locate public art funding associated with other capital improvements and direct it toward the West Commerce project. In addition, Lyles plans to raise additional funds from private sources. Kallos says she is enthusiastic about Lyles’ project, especially because it represents a new kind of public-private partnership model in the commissioning of public art in Dallas.

But Lyles still faces roadblocks. Perhaps the biggest one is, according to city policy, the request for artist proposals can’t go out until a budget has been set for the project. That means Lyles will have to raise the money for the art before he even knows what artist is going to work on the site. In other words, it is like trying to raise the money to build the Rem Koolhaas-designed Wyly Theatre before knowing that Rem Koolhaas is going to design it. That is its own art.