EDITOR’S NOTE: When the screenwriter L.M. Kit Carson walked into our office one day this past summer, I didn’t know what to make of him. It was 106 degrees outside. He was wearing a red fleece vest. “It has lots of pockets,” he explained. Kit had produced Africa Diary. It was a series of short documentaries, each no longer than five minutes, from his recent travels in Africa. They would run in November on the Sundance Channel, and Kit suggested writing a story for D Magazine about how the whole project had come together. Given that the man had adapted the screenplay for a film that won the Palme d’Or at the Cannes Film Festival (Paris, Texas, in 1984), I said, “Sure.”
Then I watched three installments of his Africa Diary and, as with the man himself, I had no idea what to make of it. The mini-documentaries aren’t documentaries in the traditional sense. They are impressionistic, almost dreamlike. But there’s something magic about them. If you take a deep breath and give yourself over to them, the Africa Diary scenes are poetic, moving. And, anyway, Robert Redford liked them enough to make the deal happen.
Then, many weeks later, just days before the magazine went to press, I got the final draft of Kit’s manuscript. It didn’t play by the rules of magazine storytelling. Not only did it not play by the rules, it didn’t even appear to play the right game. Typographically—with hyphens and dashes running amok and Upper-Case Letters sprouting up in nearly every sentence—it was quite something to behold. But if you let your mind find Kit’s wavelength, there’s something quite charming at work.
In the end, I decided that the story was uneditable. Any attempt to rein it in would fail. What follows is almost exactly what he turned in. I’m still not quite sure what to make of it—or of L.M. Kit Carson. But one thing is certain: lots of pockets do come in handy. –Tim Rogers 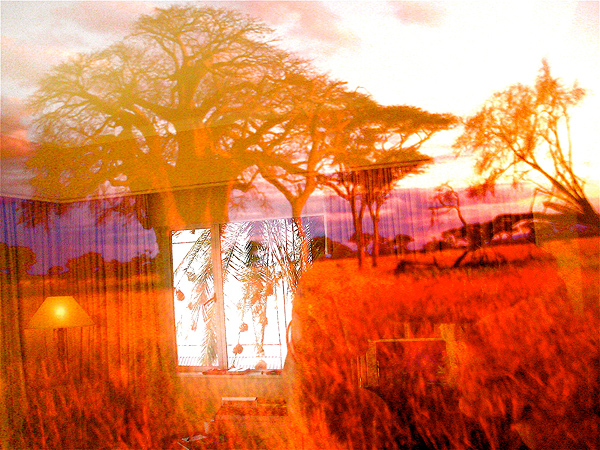 The reflection in a photograph hanging in a room in Zambia. photography courtesy of L. M. Kit Carson
July/August 2011, at this hot turn of the season, I return to Dallas on a search.

[Fact is: the Filmmaker/Journalist job is a search. Figured that out 25+ years working this job. Go with it.]

The Sundance Channel had contracted me and Producer Cynthia Hargrave to produce a new documentary series—exploring and updating the True News of what is actually working in the now-changing Africa.

For The Sundance Channel we went into three countries: Zambia, Mozambique, and South Africa. And the unique hook (Sundance always
goes for the unique) on this docu-series: we shot-and-recorded it all on cellphones. We did diary-like digital-video journals. And we worked to catch the What’s Happening Here story in four diary segments from each of the three countries.

This digital docu-series is scheduled to be finished-and-delivered August 15, 2011.

And scheduled to launch via The Sundance Channel in November 2011.

But right now all I have is hours and hours of being there footage, a loft in the South Side on Lamar, and a month to edit. A month to search in Dallas.

So the True News here: in a way, in the Summer of 2011, this Filmmaker/Journalist returns to Dallas because I’m
trying to figure out this new project—a first-timer out of Africa.

[Fact is: maybe for me Dallas works this way because this is where at Jesuit College Prep I was a first-timer—learning journalism—and starting my search into filmmaking. Mentored most key by Fr. Joe Tetlow, S.J., a genius God guy who moved later from Dallas to work in Rome on trying to return the “Holy” to the Holy Vatican.]

How’d you snag The Sundance Channel Project on Africa?

Exactly like snagging much of my work—from adapting Sam Shepard’s Paris, Texas to following up that Cannes Prize-winner by next writing/co-producing Texas Chainsaw Massacre 2—I gotta say “unexpectedly.”

Two Summers ago, I get hired by a group of first-timer wealthy do-gooder docu-makers as consultant for a documentary that they are going to shoot in Mozambique, Africa. They know I’d been around North Africa/Morocco/Casablanca before for Sundance story-writing workshops.

And they know enough to realize that in their know-nothing-ness about Africa—problems of travel/documentary production (corruption; bribery; etc.)—they might blow maybe $100,000? Or maybe more. And get less-than-zero.

This is a last-minute offer, and they need my help hard and fast. OK: going to Africa.

Prepping for this Africa shoot, I decide to somehow shoot/record what personally I can find out in Mozambique. Not recruit and bring another Camera Crew—just shooting/recording on a search by me.

So. Diligently dig into/survey/check out all the Sony/Red Camera/Flip Cams, etc. whatever mini-cams—nope-nope-nope—all still look too much like a camera.

Fact is: but there’s no prep time here. Finally I give up on finding the right whatever mini-cam for my Filmmaker/Journalist search on this trip.

Last night in L.A.—literally hours before leaving for Africa in the morning. A Good Bye/Good Luck Party at a Studio Exec friend’s house that’s settled into a cliff high in the Hollywood Hills.

And I reconnect on this long Summer sunset evening with a longtime friend/well-known Cinematographer/DP named Ueli Steiger. Ueli shoots all of Roland Emmerich’s apocalyptic/disaster movies—10,000 B.C., The Day After Tomorrow, etc. But also shoots smart movies like Bowfinger. He’s got a reputation as a “problem-solving” DP.

Now Ueli is standing right out at the edge of this Party on the brink of this cliff—shooting down the dark hills toward the lights of Hollywood Boulevard. Shooting with an odd hand-held gadget that I’d not seen before.

I quiz Ueli about the gadget. He turns it around and hands it over, explaining that he just yesterday got back to L.A. from heading up the Jury at a Swedish Film Festival. And that the Festival had given each member of the Jury cellphone cameras—they all got new Nokia N93 cellphone cams.

Ueli pokes the new N93 around excitedly in my hand. Raving on and on that the N93 is physically a tough strong hand-held smartphone-device tagged “the Swiss Army Knife of cellphone cams.” It’s a great device: shoots through a top-quality Hubble lens, kinda like what’s on the far-seeing NASA Space Telescope.

And for Ueli this Nokia N93 produces a more-than-great phone picture. For Ueli it beats the iPhone and all the others. N93—it has the best quality of cellphone cam image-making.

I heft the feel of this N93. Ueli and I experiment together technically on how this N93 shoots. Look again: I flat-out flip.

In those few minutes on that last night Ueli solved my shooting-True-News-in-Africa problem.

Next morning on the way to LAX/South African Airways—I swing in and buy an N93 at a T-Mobile Store early. Spend the off-and-on-awake 22-hour SAA flight to Maputo, Mozambique, studying the N93 and the Instruction Book—and it is fun.