Again, the Filmmaker/Journalist job is all ways a search.

INTO AFRICA
North Mozambique. Guide/Advise these non-pro first-timers through their shoot. With a pro seven-man Camera Crew—with lights to set up—with sound to set up. 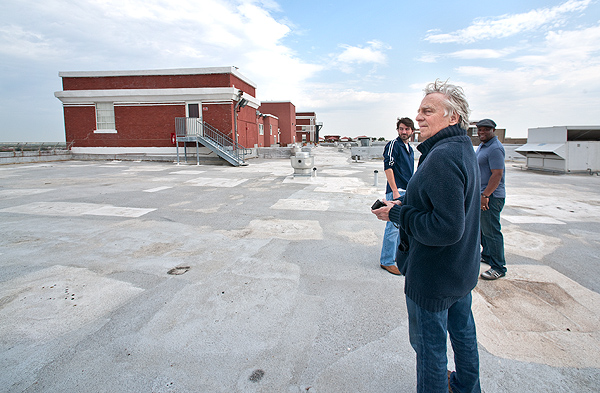 The author/filmmaker with collaborators Christian Dupree and Rance Adams. photography by Elizabeth Lavin
photography by Elizabeth Lavin
And at the same time I’m shooting/recording a digital-diary daily with the Nokia N93. And every night as I’m bed-bunking down inside the mosquito netting—each night I also download my N93’s day of sound and still images and video images into my laptop computer. And reboot.

Fact is: during the Mozambique shoot I’m already starting to rough-cut together segments of what I’ve been shooting/recording on the Nokia N93—on my laptop computer.

And for two months we all go shoot tomorrow.

Until the mosquitoes finally buzz through our sleep-netting—hit two of the Camera Crew with malaria.

Next morning we’re out of Africa. We’ve been warned that it will take six weeks for malaria-recovery.

By the end of July—in Venice, California.

Now this Filmmaker/Journalist gets into laptop-editing the diary-cyber-footage from his time in Mozambique. Now I put together a 3-Part Diary—each diary segment between 3-7 minutes in length. Short, rough reports. On The Economy. On The Politics. On The Spirit of The Place.

I burn this onto a DVD that I logo: MOZ DIARY.

Then send this DVD to longtime friend Robert Redford for his birthday in August—no agenda—just to show him what new Filmmaker/Journalist stuff I’m doing now.

Unplanned for me—Redford sends back a message through his L.A. assistant: “Go make a deal.”

Redford had set up a meeting in New York with Five Execs from the Sundance Channel. 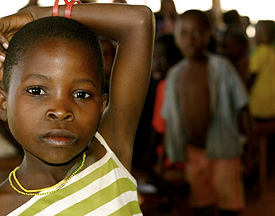 A child in Mozambique. photography courtesy of L. M. Kit Carson
I go to NYC. We gather into a conference room set up for a Viewing/Meeting. Three Female Execs and Two Men. They’re clearly professionally skeptical. And we screen a copy of the three-part MOZ DIARY DVD.

I watch them watching—gradually they’re leaning forward—getting into the leaning-forward feeling that I wanted to catch of Being There in Africa.

At the end of the DVD, some of them are wet-eyed. The Chief Exec turns semi-joking to me: “OK—it’s mid-afternoon—we’re execs—those three different diary-segments are each maybe 5 minutes in length—but they hit hard emotionally—we don’t know how you did that?” And then they add: “OK—now what do you want to do?”

And I say: “I just showed you what the people gave me. I think Africa is way under-reported. And now is a crucial time for getting the True
News from Africa. I want to go back—and find out more.”

So we make a deal.
THE DEADLINE
A deal to go back. A deal to search out what’s the next True News in the new changing Africa.

Producer Cynthia Hargrave and I spend about two months in each country—South Africa, Mozambique, Zambia. Both of us shooting digital journalism and working on figuring it out at the same time.

We return with 400 hours of digi-video from this shoot using strictly and only Nokia N93 and N95.

And I know from before that when I’m working a strong deadline—for TV Series or TV Miniseries for HBO—like when we were living out in Easthampton—I know eventually I’ll need to go at this work more than 24/7. I’ll need to go kinda off-time—kinda off-planet. Need to zone into a creative no-time/no-place—like isolating into a kinda Special Space-Capsule for Making-It-All-Up.

And again now I find unexpectedly—for me anyway—this creative no-time/no-place/no-distractions feeling here at the edge of downtown Dallas in a large no-pretense loft space. In South Side on Lamar.

Next Fact is: I figure out that this work—editing hundreds of hours of digi-video into self-contained beginning-middle-end five-minute diaries—is going to be like inventing a new story-making language.

And I decide, in a way, that to invent a new story-making language, I need a Team of New Collaborators with no standard movie-making habits to break. Ready to explore: try this—try this—try this …

Producer son Hunter Carson (himself a sharp 35) recruits two young Edit-whizzes: Rance Adams (38); and Ryan Fyffe (31), who runs an edit-biz called Illusion Fields. And a young Sound-Recorder Smart-guy, Christian Dupree (30), to cyber-link with a genius Music Director, John Aylward (31), who’s teaching at Harvard. We patch together a makeshift editing studio in my South Side loft.

It works. We hit the finish of the last Voice-Over at about 11:37 PM near-midnight on August 12. Next morning we package up all the project and FedEx to The Sundance Channel in New York City. We make the Delivery Deadline: August 15.

And at the end, the Edit/Sound Team celebrated at Opening Bell Coffee, the espresso bar/coffee shop in the basement of South Side on Lamar. I semi-joke to Jeff West of Matthews Southwest, the property’s owner: “Jeff, I think you guys sell Inspiration here.” Jeff’s comeback: “Nah [laughs]. We give it away. Free.”

LAST LINES
Really, the search is the main action going. For me, anyway. The search. What it takes outta your heart.

Wrapping up on our third MacDowell grant, one of the Grant Advisors cocked his head, casually noting to me: “We figured out what you’re doing with these online Africa Diary-Segments for The Sundance Channel. You’re doing Jack Kerouac for the internet. Y’know, a 21st Century version of On The Road—in Africa.” Go with that humbling thought.

And edit a Special Thanks to The MacDowell Colony into the Sundance docu-series End Credits.

LAST BACK-STORY
Funny thing is, more and more my life feels like “Who knows what’s going to happen next?” Not me. Like, how do you get from a Dallas Jesuit College Prep-Schooler with a Summer job unloading freight cars for the Irving Lumber Yard to … a guy standing up in a pack of Euro and American movie stars in the Grand Palais theater at the Cannes Film Festival with the audience roaring cheers and applause at the end of the screening of Paris, Texas, a movie he adapted? And that wins the Cannes Grand Prize, Palme d’Or? Figure: lots of Luck and-lots-more.

Keep your cellphones on. The future will be downloadable.