The sun is bright, and bars on Lower Henderson Avenue are crawling with happy young people in T-shirts ordering pitchers of beer on patios. But inside Neighborhood Services Tavern, at its small, crowded bar, the scene is darker, moodier, with better music and drinks. At the bar sits the most influential man in modern cocktail history, Dale DeGroff, the man who worked at the world-famous Rainbow Room in New York in the 1980s, the man whom the New York Times has credited for being “single-handedly responsible for what’s been called the cocktail renaissance.” He’s delivering an abbreviated version of the speech he just finished at his private margarita seminar at Hotel ZaZa, which began with a field trip down the produce aisle of Whole Foods Market. He holds aloft a lime from the bar.

“You telling me you can’t squeeze this?” he asks. DeGroff looks like the man on the wall behind him, Steve McQueen, if he’d lived into his 60s. The young women flanking him giggle. “Are you f—ing kidding me?”

DeGroff is debunking the long-standing fallacy that profit is lost when bartenders start thinking they’re chefs, because making cocktails with fresh, high-end ingredients is too expensive and time consuming. Of course a top-shelf margarita requires freshly squeezed lime juice. Any bartender worth his rim salt can cut and squeeze a lime in a flash. More important, he says, customers increasingly demand a more complex cocktail. It’s the same transformation the restaurant industry went through in the ’90s with food. It used to be that dried herbs and powdered cheese were okay on your pasta; suddenly fresh basil and Parmigiano-Reggiano were required.

“There hasn’t been a more exciting time in the American cocktail industry than right now, this moment,” DeGroff says. “It’s a sea change in the craft of bartending. It’s a perfect storm: high-end products, the culinary explosion, and customers who want that freshness and spice and creativity they’re seeing with their food.”

DeGroff trails his finger down the cocktail menu and expounds on what he finds—e.g., the Egg Man (pineapple-infused pisco, raw egg white, lime juice, nutmeg, Angostura bitters)—and then points at the mustachioed man behind the bar who created that drink. “Dallas is a great cocktail town now, and this guy here is one of the main reasons. Why do you think I’m here?”

If DeGroff was the industry’s savior, reintroducing pre-Prohibition levels of sophistication, Jason Kosmas is one of his prophets. He took DeGroff’s lead and in the ’90s managed and opened New York lounges (Pravda, then Employees Only) that helped spread the word that mixed drinks could have a style and heritage, a depth, that put them on par with great plates of food. Although the affable, humble Kosmas would deny it, his full-time presence in Dallas served notice that the cocktail culture had arrived. (Kosmas would go on to leave NST before I finished reporting this story, but more on that in a minute.)

The truth is that Dallas, long known as a city of great chefs, has in the past few years quietly become one of the top U.S. spots for great cocktail creations. That’s because a core group of mixologists—Kosmas, Michael Martensen, Eddie “Lucky” Campbell, and others—has embraced the five tenets of the classic cocktail program (fresh juice, forgotten spirits, adventurous liqueurs, the speakeasy scene, and a swinging style). In turn, their drinks have increased the city’s cocktail IQ. It’s a story of a few bartenders banding together to fight close-minded restaurant owners and a cosmo-swilling clientele.

To Kosmas, of course, it’s simpler than that. “Some people think cocktails are for lounges only. We think they should go with food. It shouldn’t shock people,” he says, “but for some reason it does.”

It’s 11 am on a Saturday, and in his one-room apartment off Greenville Avenue, Lucky Campbell, in his usual fedora and t-shirt, is still trying to get his bearings. He tends bar at Bolsa, and last night the place was packed. There are several local bars with deserved reputations for serving high-end cocktails—the Mansion Bar, Victor Tango’s, Smoke, The Usual in Fort Worth, Neighborhood Services Tavern—and several others that have reputations but whose omission from this article was not an accident. It’s safe to say that Bolsa belongs among the elite. Largely that’s due to the disorderly state of Campbell and his apartment.

More than 50 bottles of liquor fill one corner. A go-bag bursting with bar tools and bottles lies by the door. Campbell opens more than a dozen jars of roots, herbs, and fruits steeping in grain alcohol. This is how you make bitters. They’re all labeled with black marker on masking tape: pink peppercorn, angelica root, horehound, wormwood, mugwort, dragon fruit, others. It’s like an apothecary married a drunk.

He takes a long, deep whiff of one jar and holds it out. “Smell that, dude,” he says. The jar is marked “Black Walnut Leaf.” It smells nutty and earthen, like, say, black walnuts and leaves.

Campbell researches the history of drinks obsessively and isn’t shy about sharing what he knows with whoever happens to be sitting on a bar stool in front of him. That intensity, combined with a mixing manner that can be charitably be described as “flashy,” makes him a polarizing figure among customers who know their stuff. Some employers, too. Campbell was fired from Screen Door for making a true Ramos gin fizz for a customer, despite being told he wasn’t to go off-menu.

But other bartenders love him, and in the quiet of his apartment-laboratory, it’s easy to see why. He pulls out Prohibition-era cocktail manuals to discuss inspiration, demonstrates the best way to hold a mixing spoon, creates a new bottle of bitters with his guest to show how it’s done. (Eric’s Bitters No. 1 should be rounding into its peppercorn-orange flavor profile about the time you read this.) He rails on the evils of batching (premixing ingredients or drinks beforehand).

Now he’s evangelizing about using ice chopped and shaved from a large block when possible. He plops the big imperfectly square cube he’s fashioned into a lowball glass and mixes three fingers of an old-fashioned, a beverage he declines to imbibe when offered the final sip.
“Hey, no, sorry, dude,” Campbell says. “I don’t drink.”

Then he takes a hit from a 2-foot-long glass bong before launching into a disquisition about how the Dallas bar scene has grown so fast in the past five years.

“Dallas’ bar scene has been guided by the old-school restaurants,” he says. “They don’t see the value of slowing down, of taking the time to make your drinks properly, the way you do someone’s food. That’s why there hasn’t been a true cocktail lounge in Dallas. But we’re changing that. Me. Mike. Jason. Abe. We geek out on this stuff, we try each other’s stuff, we critique and compliment and challenge each other. And through that, you know, that brotherhood, we take all the best stuff back to our bars, and—if we can remember what the hell it was we made last night that was so damn perfect—we’ve got more progressive owners now who will let us push these drinks onto the menu. It’s a beautiful thing.”
He checks his watch. It’s almost 1 o’clock. “Mike should be up by now. If not, let’s wake him up. He can tell you how it all began.” 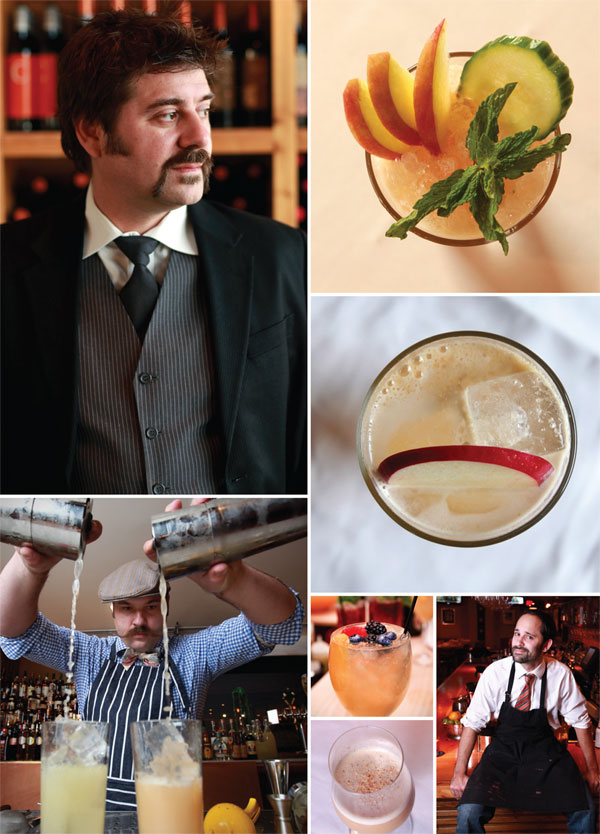 (Clockwise from top left) Jason Kosmas at Bolsa; Eden’s Cup at Bolsa; St. Normandy’s Sunshine at Cedars Social; Neighborhood Services Tavern’s Andrew Lostettor; Lucky Campbell’s Smuggler’s Landing; Spanish Coffee Flip at Neighborhood Services Tavern; Martensen mixes it up at Cedars Social. photography by Jason Janik
photography by Jason Janik
Jerry Thomas wrote the seminal book Jerry Thomas’ Bartenders Guide: How To Mix Drinks or a Bon Vivant’s Companion, published in 1862. But Harry Johnson is the man who wrote the bartender’s bibles some 25 years later. They had chapters like “To Know How a Customer Desires His Drink To Be Mixed” and “How To Keep Ants and Other Insects Out of Mixing Bottles.” They have recipes for hundreds of drinks. The best part about re-reading his books, which Michael Martensen owns, is seeing a picture of Johnson’s handlebar mustache—a look Martensen shares.

Martensen’s apartment off Travis Street is like Campbell’s after the maid has come. His spice shelf, his bitters collection, his bartender library, even Martensen’s go-bag are more compact and neat.

“I’ve got to have my mise en place,” says the soft-spoken Martensen, who, with his facial hair and wide back, looks like a circus strongman. “Everything in place. It’s the way I work in the kitchen and behind the bar.”

To put me in my place, Martensen spends a few hours making sure I understand the history of cocktails pre-, during, and post-Prohibition. Absinthe is discussed, as is the Volstead Act. How Dallas finally got from those classic cocktails—the gimlet, a Manhattan—to an Oswald’s Corridor (Campbell’s outstanding mix of bourbon, Cherry Heering, Punt e Mes bitter vermouth, absinthe, and orange essence) is a story Martensen can tell only after the stage has been properly set.

Martensen was having a blast working at The Little Nell in Aspen, Colorado, a five-star hotel serving expensive bourbons to Texans on vacation. He then moved to Nantucket, Massachusetts, when a friend who was consulting for John Tesar, the new chef of the Rosewood Mansion on Turtle Creek at the time, called and asked him to take over the cocktail program. Tesar explained that he didn’t just see food as the Mansion’s mission. He said the culinary experience, like a bar stool, needed three legs to work: food, service, and drinks. “Most restaurants don’t think that way,” Martensen says. “But at that point, John had the juice to make it happen.”

So by 2007, Martensen had every bartender’s dream job. No matter what cocktail he wanted to put on the menu, Tesar would bring in the freshest ingredients for it every day. What’s more, Martensen had a great clientele. They traveled enough that they were trying these same drinks in Los Angeles, San Francisco, and New York. In short, they were educated. They appreciated what he was pouring. Most important, they had the money to pay for $15 drinks.

Martensen met Campbell while the latter was tending at The Club in the Centrum building, and the two “drink nerds” started talking cocktails and making fun of the folks whose idea of high-end cocktail culture was a candied apple martini. (Hello, Palomino!) They spent time after work at each other’s bars, experimenting, waiting for Dallas to appreciate the fruits of their after-hours tinkering. “We spent so much time making drinks behind that bar,” Campbell says, “we shoulda had cots back there.”

Little did they know that a similar story had played out years earlier in the boroughs of New York, leading to Manhattan’s cocktail revolution.