Dining out was once so simple. You sat down in a restaurant, ordered whatever sounded good, ate it, and went on with your life. Now you need an advanced degree in epidemiology before you’re qualified to choose an entrée. Every day, we get bombarded with health warnings about food: too much added sugar will kill you if excess salt doesn’t get you first. Menus are loaded with politically charged, often slippery buzzwords: “sustainable,” “organic,” “locally grown,” “free range,” “grass fed,” “genetically modified,” “farm raised.” Go ahead and order red meat, but that cow had best been raised on tall-stem Texas blue grass handpicked by a nun.

Many area producers and restaurateurs have their hearts in the right place, but I can’t help but be suspicious of some who tout ingredients as “organic” or “local.” This is Texas. There is no such thing as a locally grown tomato in January. Organic is even more confusing. If your butterhead lettuce was sprayed with an “organic” pesticide such as a bacterial toxin or pyrethrum or rotenone, can it really be considered organic?

To be honest, I had similar misgivings about the latest food trend, gluten free, and I approached Company Cafe with a jaundiced eye and just enough knowledge about the subject to be dangerous. The basic facts: about 2 million people in the United States have celiac disease, an autoimmune disorder of the small intestine. If they eat gluten, the “glue” that binds and structures starches, their intestinal tract, to put it politely, goes haywire. Then there are some healthy people, too, who avoid gluten because they say gluten saps their energy.

The folks at Company Cafe care about natural, locally sourced, organic food. They are also determined to serve healthy, “clean lifestyle” comfort food, including gluten-free versions of old-fashioned favorites. “There are a lot of people with celiac disease who have no place to go out and eat gluten free,” says Natasha Berlin, one of the chefs at Company Cafe. “One of our managers has it. And a lot of people without celiac have said when they cut gluten out, they do feel better.” To get up to speed on the benefits of going gluten free, I spoke with nutritionists, celiac sufferers, and several otherwise healthy people who have eliminated gluten from their diets. I’ll leave the gluten-free-diet-is-the-cure-for-all-that-ails-you discussion to Oprah and stick to reporting my dining experiences at Company Cafe. 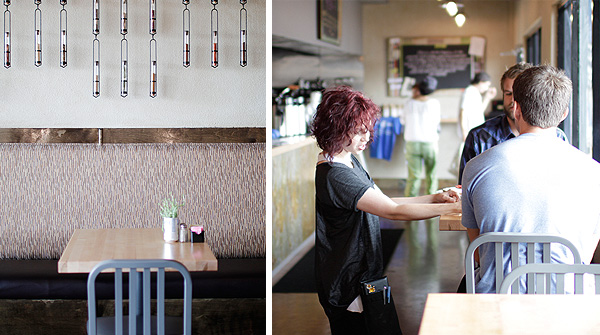 (left) Banquettes along one wall. (right) Relax in the cozy dining room. photography by Kevin Marple
photography by Kevin Marple
Gluten free or not, this small restaurant on Greenville Avenue just south of Belmont is a fun and satisfying place to eat. If you’ve been to Kozy Kitchen, you’ll recognize most of the staff. According to one of our servers, five of the main employees at Company Cafe, including chef Fred Mesick, walked out of Kozy Kitchen. They were discovered by investors and first-time restaurateurs Jeff Wells and Stephen White, whose trainer convinced him to ditch gluten. On all three of my visits to Company Cafe, I was impressed by the friendly, tightknit staff who worked the kitchen and the floor. Every question I asked was answered with an intelligent response. When I remarked that it was unusual to see sweet potatoes on a menu that are deep fried in olive oil, our waiter said, “We use olive pomace oil with a higher burn point of 420 degrees so the polyunsaturated fat stays intact. If you use extra virgin and the oil becomes too hot, the polyunsaturated fat starts to break down and becomes carcinogenic.”

Won over by his mastery of gastronomic chemistry, we ordered the loaded sweet potato fries. We were stunned by a simple dish raised to brilliance by the quality of its ingredients. The mound of semicrisp sweet potato strips were tossed with a touch of olive oil, lime juice, bits of all-natural bacon, and fresh jalapeño slices, then covered with a thin layer of unpasteurized white cheddar cheese. Two of us fought over the last fry. When the bowl was empty, there wasn’t even a trace of grease on the plate. Were we too full to finish our meal? No, because, according to our waiter the food scientist, sweet potatoes aren’t as heavy as white ones. For the record, Company Cafe doesn’t serve white potatoes. If you haven’t discovered the glory of the orange spud, try the cauliflower purée.