It’s not enough to have a regular fashion show fundraiser nowadays. Like Gypsy Rose Lee, you’ve got to have a gimmick. At the Dallas Arboretum’s annual Mad Hatters’ Tea Party, guests competed in such hat categories as Best Use of Dahlias and Most Whimsical. Susan Scullin admitted to working for months with an Atlanta designer on her pink peacock topper, and she walked off with the top award.

One of the day’s challenges was trying to peer between and over the massive works of millinery art in the audience to see the Highland Park Village fashions on the runway. Pity the poor souls who sat behind Connie Carreker, whose hat was topped with an actual birdcage containing an actual bird, or Dee Simmons in her Awesome Ascot, designed by Shane Walker, or Steve Kemble and his Super Bowl XLV chapeau.

Yet, for all of the scheming and effort put into the heady masterpieces, they all paled in comparison to the full-length gown of orchids, dahlias, and carnations made by Botanical Art. On display at the champagne reception and costing more than $6,000, the gown required 65 man hours to create—and promptly wilted after the show.

There were no shrinking violets in the Hilton Anatole’s Chantilly Ballroom for the Beyond the Rainbow luncheon and fashion show, where jocks and other celebrities escorted youth models who have battled cancer. While the kids played backstage with Barney and Mother Goose before the show, the adult celebrities warmed up by comparing ailments. Former Dallas Cowboy Randy “The Manster” White complained about his stiff neck, and Roger Staubach lamented his bad back. Once the luncheon started, the former ’Boys had no problem working the crowd for donations to the Children’s Cancer Fund.

But 5-year-old Ian Loven stole the show. He didn’t mean to; it just happened. Seems that Ian’s jeans became a bit too saggy as he started his runway strut. He gave a look of panic to his escort, Camille Cain Mauritzen, who quickly helped hike them up. And the show went on without another hitch. 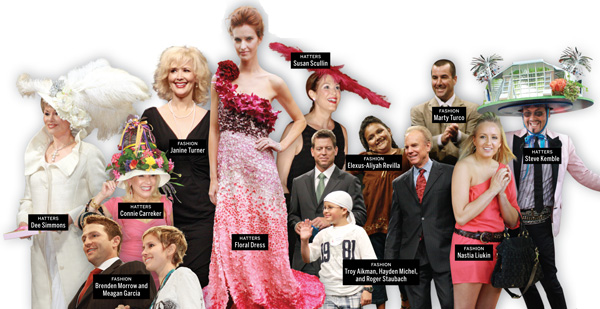