Tristan Simon and David McMillan, the duo behind Victor Tango’s on Henderson Avenue, make an odd couple. Simon is a 35-year-old bachelor, a fast-talking, good-looking guy who used to date a TV personality. His first job out of college was as a sports agent (for Cherokee Parks). In 1999, he launched Consilient Restaurants, the company that has transformed Henderson Avenue with Hibiscus, Cuba Libre, Fireside Pies, and The Porch (plus Sense, now closed, and Candleroom, since sold). His entertainment empire has attracted big-name investors (T. Boone Pickens, Scott Ginsburg) and kept him up late on school nights (partying with Robert De Niro, flying to Vegas on Mark Cuban’s jet).

David McMillan presents a different portrait. He’s married and has an 8-year-old son. His partying days are behind him. The 50-year-old sports unruly gray hair and a scruffy beard that hint at his hippy days in Berkeley, California, where he was born. McMillan started cooking when he was 6 years old and apprenticed and worked in fine dining restaurants all over the world (Atlanta, Frankfurt, Baden-Baden, Boston, Beverly Hills) before he came to Dallas and took the reins in at Nana in 2001. He wowed critics with his culinary wizardry. I can still taste his version of grilled Texas quail with Armagnac poached prunes served on a thick slice of Medjool date cake. But at the height of his success at Nana, he left to open his own upscale indie eatery called 62 Main—in Colleyville, of all places. Dallas chefs thought he was crazy. But McMillan was closer to his family and happier. Each day, he woke up, went to the local market, decided what to cook, and cooked it.

When McMillan brought his wife Denise to meet the Consilient staff, she said, “You certainly are the old guy.”

Perhaps in part because of this odd-couple pairing, Victor Tango’s is the first Consilient restaurant that didn’t open smoothly. Conceived as an urban bar-eatery, Victor Tango’s encourages sharing, whether it be the food or the top-shelf cocktails. Creating plates to share didn’t appeal to McMillan. (“Sharing is not a real chef’s concept. I like to say, ‘This is my food, eat it.’ ”) He has had to make other adjustments to fit into his role as corporate chef. There are meetings to discuss “menu direction” and “design sense.” There are the other Consilient chefs to oversee. Perhaps it was a case of too many cooks. Simon is working on a project in West Los Angeles, and he flew the chefs from California to Dallas for a few weeks. They tinkered with Victor Tango’s menu, which could account for the inconsistencies in the food. Whatever the reason, Victor Tango’s opened with a stumble. 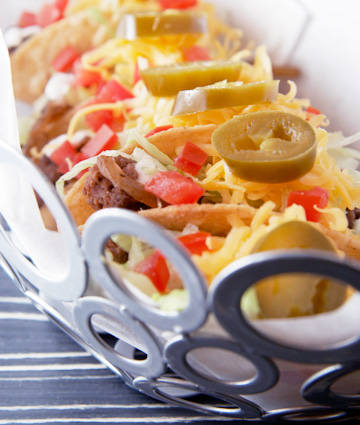 Taco basket. photography by Kevin Hunter Marple
photography by Kevin Hunter Marple
The first time I dined there, the evening was full of highs and lows. The lowest point came when one diner at the table asked our waitress about the bar’s selection of single malts. She said, “We don’t have any on draft.” When he told her he was referring to Scotch, she giggled and ran off to the bar. Thankfully, the Oban ordered neat arrived with a Moscow Mule, a delicious cocktail concocted from pureed ginger, Tito’s vodka, freshly squeezed lime juice, and a splash of club soda. All of the “scratch” cocktails we sampled were superb, and a bargain at $8.

But our momentary euphoria was dashed when a plate of pan-fried skate in brown butter sauce and topped with capers—a classic European bistro dish—was delivered undercooked and with a faint odor of ammonia.

Then, hallelujah, we were introduced to the all-Prime VT burger, an elegant upgrade of an In-N-Out double/double: two 4-ounce patties (ground rib-eye and tenderloin) layered with Tillamook cheese and topped with caramelized onions. The smaller-than-regulation size and slightly sweet bun was slathered with a ketchup-mayonnaise secret sauce. Ask for extra napkins; it’s a delightfully sloppy mess of flavors. Sadly, the accompanying fries were limp and watery.

Six weeks later, I returned to find a completely different menu, vibe, and service attitude. The long list of sharing plates had been cut back and organized into courses. “Victor Tango’s opened as a half-baked concept, a tweener,” Simon says. “We hadn’t figured out where we wanted to go.” But after two more visits and sampling almost the entire menu, I can safely say that Simon, McMillan, and the talented kitchen staff, which includes chef Greg Bussey, are close to hitting their mark.

What I don’t understand is how this concept will ever make money. The food on the plate is painstakingly prepared with high-end ingredients, yet the average price of a plate for two hovers around $14. I’m not talking about what we know as bar food or tapas-style portions here. McMillan and company are cooking highbrow dishes such as roasted marrow bones with onion confit. The plate looks like it came from Wilma Flintstone’s kitchen: three huge shank bones are split lengthwise to expose long strips of gelatinous brown marrow. The primal presentation heightens the pleasures of melt-in-your-mouth bites of warm, earthy marrow clashing with bits of toasted brioche and a slightly sweet onion confit.

Ahi tuna nachos are another killer nibble: small mounds of hand-chopped tuna—mixed with finely minced English cucumber, jalapeño, soy, and ouzo sauces—sit on Doritos-sized triangles of crisp won­tons. The nachos are placed on a long platter drizzled with Sriracha-spiked aioli. This is food for serious gastronomes. 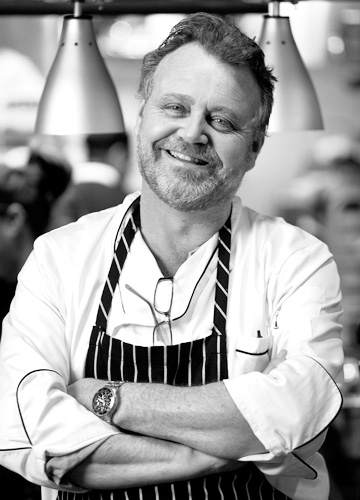 Chef David McMillan. photography by Kevin Hunter Marple
photography by Kevin Hunter Marple
Although sharing is the mantra of the menu, I did not want to part with one of the six bacon-wrapped shrimp served with white cheddar grits ($14) or any of the grilled baby artichokes sitting on a twig of fried rosemary ($10). I used a fork to split the shrimp, but I popped the bite-sized artichokes into my mouth like bonbons. And on this visit, the fries stood at attention—thin, crisp, and firm.

After the initial single-malt mix-up, the servers on subsequent visits were attentive, knowledgeable, and eager to make suggestions—an impressive feat considering the overall restaurant concept, menu, and decor have been in a constant state of change since opening night.

While some of us on the north side of 50 may be weary of ubiquitous flat-screen TVs and loud music from bands we don’t know the names of, the younger set at Victor Tango’s—the clear majority on weekend nights—happily cheers on the local teams and digs the creative mix that plays in the background (White Stripes, TV on the Radio, Springsteen). On the other hand, the young ones probably don’t appreciate the restored 80-year-old brick walls, solid walnut table tops, or the cooking techniques being practiced in the kitchen. Perhaps at Victor Tango’s we can have some fun closing the generation gap—and practice sharing.