So we’re seated at a table at central 214 when a guy in his 30s shuffles through, cell phone pressed flat to his ear. He stops. Right there in the dining room, he carries on a conversation, hilariously oblivious to his surroundings.

Skip past the fact that his ostentatious cell phone-itis is so 2002. The weird-cool part was that he’d drifted into the dining room from the lounge. It says much about the design and layout of this new hotel restaurant. It’s so expansive and seamless, with entry seguing into lounge seguing into restaurant, that if you’re a cell phone-wielding doofus, you may find yourself unwittingly broadcasting your tel-con to a roomful of diners.

It also says something about the gorgeous lounge, with its teak tones, ample couches, and amber lighting. No wonder it fancies itself the center of this universe, with the two dining wings mere appendages to its vibrant center. The environment generates energy, a sense of something larger, that everyone can share.

Central 214 has so much going on. The clever name references its freeway address,  the primary area code of Dallas, and its back-story as the centerpiece of Hotel Palomar, a branch of the Kimpton boutique hotel chain with siblings in San Francisco and Washington, D.C. Kimpton executed a stunning renovation, transforming this once-rundown property at Mockingbird and Central into a slinky mixed-use complex with hotel tower, condos, and retail space.

There is also chef Tom Fleming, whose distinguished past includes Old Hickory Steakhouse, Pappas Bros., and the Riviera. He’s a pro, and his food impressed, with its sure technique, streaks of novelty, and diligent sourcing.

And you can’t forget the staff, assembled by general manager Greg Francis. Suffice it to say that they’re not the same dozen you see hopping from one opening to another. What you have here is a collection of personalities, some merely unconventional, others true misfits. Their eccentricity mostly won’t interfere with your getting fed, nor decent advice on a bottle of wine such as the Chateau Potelle Zinfandel VGS, a soulful red from Napa.

Dinner started with good bread from Empire, served with olives, cold butter, and a thick artichoke spread with a lemony tang. An appetizer pizza topped with shreds of chicken, goat cheese, and caramelized onion had a nifty crust, crisped on the grill, its charred cross-hatch living proof.

Crab cakes were nearly all crab, which you’d think would be ideal. People always gripe about too much filler, right? Well, these might be the only crab cakes where you wish you had more filler. They didn’t hold together, and the lack of absorbent bread crumb made them seem oily.

Embracing the trend of championing low-end cuts of meat, 214 spotlights hanger steak, and thanks for that, as another plate of short ribs would be too much to bear. They did a terrific job on the hanger steak, searing its edges until black and crusty, like the edging you see on smoked brisket. The steak was sliced diagonally, and, cooked medium rare, its blackened crust neatly framed the vivid, tender red center. 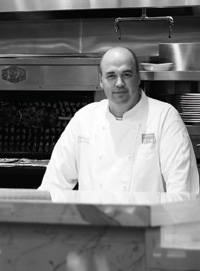 Chef Fleming. photography by Kevin Hunter Marple
photography by Kevin Hunter Marple
If you ask what the specialty is, the servers will say that Fleming loves his rotisserie, a treatment given to both chicken and duck. Both were good but portioned too huge. That sounds like another odd complaint, but what to do with a half chicken or two duck breasts when one would be fine? The duck came with spaetzle, a nice touch and a satisfying side.

Procurement is a big deal here, which might help explain why the artichoke-crusted pork, an organic cut from Meats by Linz in Chicago, was so notably juicy. It almost didn’t need the wet artichoke crust. Points for the accompanying ragoût made with barley and root vegetables, an underutilized, nutty-tasting grain.

Given his steakhouse background, Fleming knows classics such as lobster bisque, a superb rendition with flavors of sea and cream, served in a cool asymmetrical bowl, with a floating crostini carrying a cargo of chopped lobster. Oh, yes.

Sides were New Wave: mac and cheese made with rigatoni and Parmesan, creamed corn with fresh kernels in a sour cream base, and pommes frites in a stylish Belgian-style paper cone. Salads had thoughtful ingredients but exhibited a sort of sadistic impracticality. Chopped salad with mixed greens, cukes, blue cheese, asparagus, and a quartered artichoke was served on a narrow rectangular plate—fine for a showpiece appetizer, clumsy for a salad.

Desserts were fruity and light, from the “homemade” cannoli with lemon chiffon filling in a light pastry crust to the strange, soupy flan with strawberries. The only remotely chocolate selection was chocolate crème brûlée. You read that right: no chocolate cake.

Hot tea made a smart capper, summing up much of what’s good about Central 214. You’re shown a wooden box with scientific-looking vials containing rare, whole leaves, which are then brewed in an ornate French press: fine foodstuffs served with high style.