Carl Cornelius gazes at me with eyes as clear and blue as the sky on Easter Sunday morning, and that’s fitting, because the man’s life is all about the spirit of resurrection. He’s sitting in a structure he calls the Little White Barn. It’s his temporary office, off Interstate 35, just north of Hillsboro. Modest for a man who owns his own town, but the structure has some history. “Dr. Red Duke used it for his first-aid center during the Fourth of July picnic in 1987,” Carl says.

Click for more about this remarkable story.
A man between empires, Carl attained the rank of Texas Folk Hero First Class because of a truck stop he built, the famed Carl’s Corner. When Carl decided to go rural-retail on the main road, he anticipated dealing with some curious and sometimes troubling transients. Hardly, however, the periodic visitations of the Four Horsemen of the Apocalypse. So far, he’s had an eventful run. But like all professional survivors, he only addresses the future, gesturing at the construction underway on the Hill County land across the nearby highway. Thanks to his old friend and country neighbor Willie Nelson, Carl has gone green. He’s building a new and improved truck stop that will save the planet. No less than the New York Times has already taken notice of the place, which is set to open soon. That’ll be intriguing to watch. Of course, that’s the way it’s been around here, and what happens now is simply the next chapter in a Faulknerian epic.

Carl Cornelius opened Carl’s Corner in 1984. If you’ve driven that vapid, bumper-to-bumper conveyer belt of frenzied humanity that is I-35 between Dallas and Austin, you’ve seen the place, recognizable largely because of the 10-foot-tall dancing frogs situated on the rooftop. Really, Carl’s Corner stood out as the only identifiable landmark along the tedium of the Dallas-to-Austin corridor that Larry McMurtry, in Roads, called the most anxiety-provoking stretch of highway in North America. 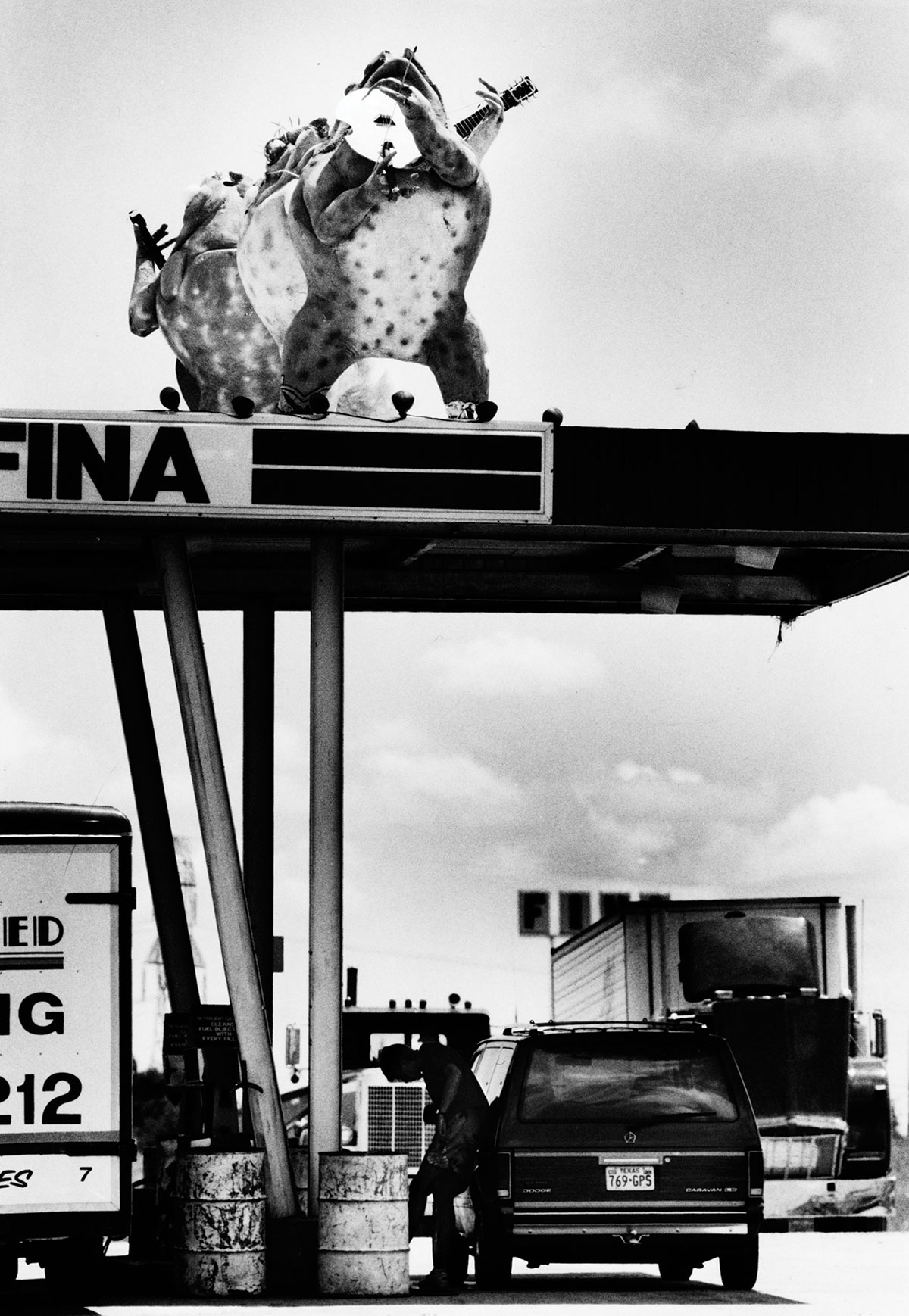 Photo by Juan Garcia/Dallas Morning News
Photo by Juan Garcia/Dallas Morning News
Now, after almost a generation, the place is gone. So are the frogs. But, because Carl is Carl, be assured that this roadside attraction will return. Carl, a man generous of heart, mind, and girth, founded the place with the simple purpose of providing diesel and refreshment to truck drivers. His marketing scheme, at first, consisted of a woman called Treasure Chest who broadcasted live from Carl’s on a CB radio. “Come on by,” she would coo to the truckers, “and get a free piece. [pause] Of watermelon.”

That was then. Things have changed. Carl now fosters a broader ambition.

Like all significant achievements, the new Carl’s almost didn’t happen. Circa 2003, Carl was disconsolate. The famous truck stop was in trouble, struggling to compete with operations like Love’s and Knox that were slicker and better financed. And, for the third time, Carl had lost a son. He was on the phone to his longtime pal Willie, the Cen-Tex balladeer. After losing his three boys, one at a time, Carl had lost his spirit, and he watched, almost passively, as the truck stop drifted toward oblivion.

“Willie, I think I’m gonna shut her down,” Carl said.

His tone was bitter. So was Willie’s.

“You’re what?” said Willie. “All right, then, Carl. Just shut the [expurgated adjectival phrase] thing down.”

The next morning, Willie was on the phone again.

“Carl,” Willie said, speaking slowly and evenly, “don’t do that.”

Willie had other ideas. Carl’s Corner, he decided, should become the national headquarters for the singer’s biodiesel project. Dump corn and soybeans into this machine, pull a lever, and presto. Out comes organic fuel that’s friendly to the earth’s atmosphere. Willie burns the stuff in his Mercedes. “It smells like pancakes,” he says. 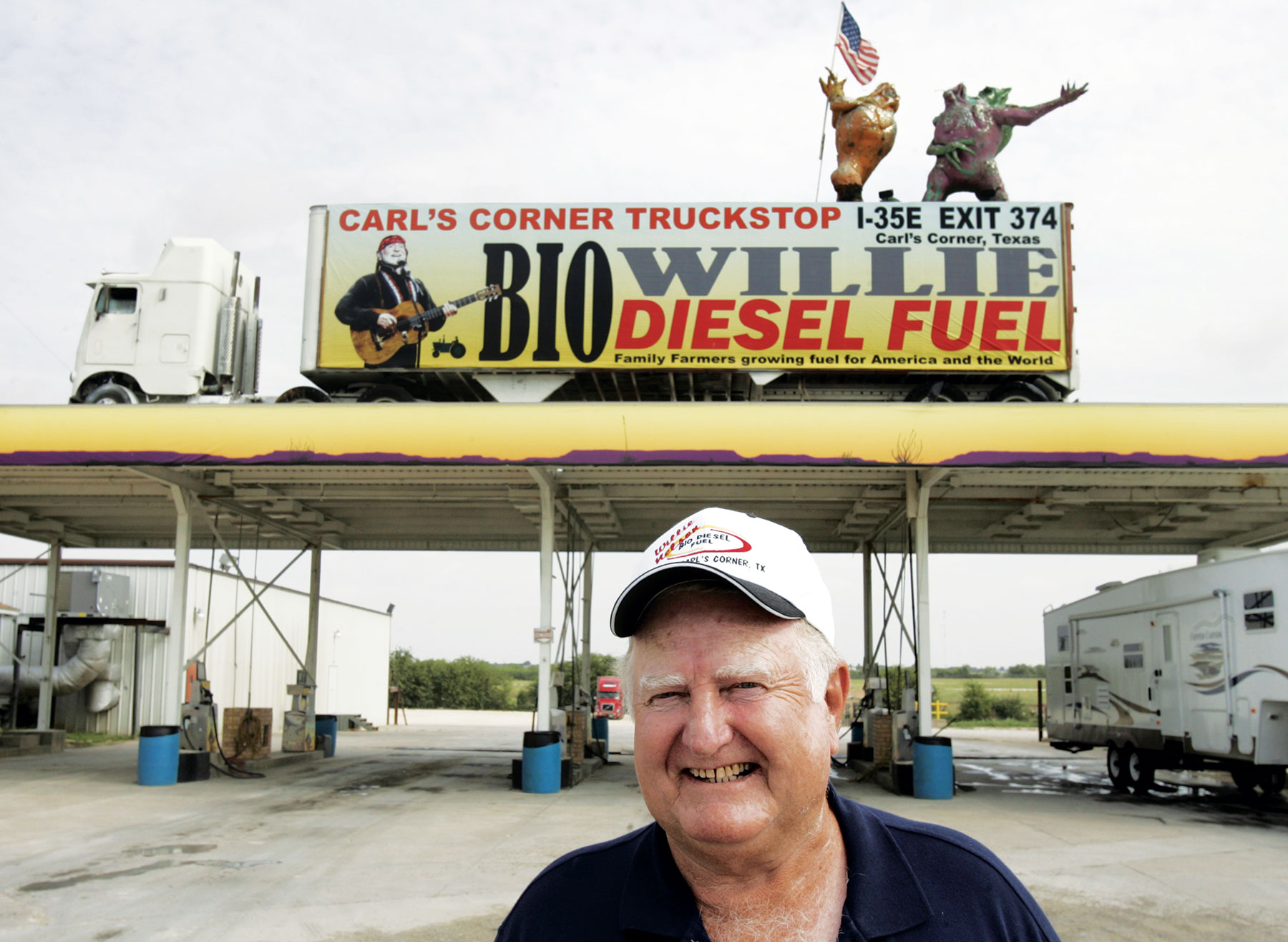 The new place, known as Willie’s Place, will be sort of a Whole Foods store for the Peterbilt set, and it should be up and running by New Year’s, according to the owners. The site is already alive with celebrity investors. Another Nelson, former Mavericks coach and now Golden State Warriors coach Don, is a frequent guest. So is Morgan Freeman. Julia Roberts is due to drop by soon.

It appears now that Carl and his compadres will all live happily ever after, which is the way all good stories should end. And this, the evolution of Carl’s Corner, is a helluva story, as rife with Texana as the battle of the Alamo. Sometimes, driving I-35 as it approaches FM 2959, I can glance in the rearview mirror and see the guy behind me gazing at the place, and I think, “Boy, if you only knew.”

I met the fabulous Carl Cornelius not quite a year before the original Carl’s began its operation. We had a mutual friend, a Dallas man named Monk White, who, in his natural prime, was the most famous stockbroker in the United States. Monk and Carl were involved in a land transaction, the land where the truck stop would be. My job would be to act as the, uh, publicist for what was to come.

Carl insisted on driving up to Dallas to conduct our high-level strategic discussions. These took place at Ma Brand’s, a pressure-cooker bar somewhere around Samuell Avenue. A pressure-cooker joint is a strange genre of drinking establishment. The doors open at 9 am, and by 10:30, the place is packed. Housewives would throw a stew in a pressure cooker, drop the kids off at school, then drive to Ma Brand’s. There they would dance with a stranger, adjourn to a nearby motel for a nooner, take a shower, pick up the kids, and race home in time to serve the stew. Carl didn’t go for the nooners. He just liked to dance.

At our first meeting, it became immediately evident that he was a true eccentric. “I have out-of-body experiences all the time,” he disclosed, sitting at our table. “I hear a whirring kind of sound, and then I’m just sort of floating above everything. I can see for miles.”

His enthusiasm bubbled for the truck stop. He wanted a new career. His previous venture, a housing development for African-Americans in the Hillsboro area with five thoroughfares named Matthew, Mark, Luke, John, and Carl streets, had failed to catch on.

“Okay, Carl,” I said. “First thing we gotta do is put together a press kit. That’ll have to include your biography. Gimme some highlights.”

“Well, I grew up in Kingsville and ran away from home at age 14. Had about five bucks in my pocket.”

“How did you manage to sustain yourself?”

“Uh-huh. Might be better to focus on something else.”

“All right. I joined the Army, wound up getting court martialed for shoving a major off a boat and into the China Sea. Then, for a time, I became an evangelist. Had my own little ministry. Spread the good news all over Mexico. Then—wham—it hit me. Before you go and save souls, you need to clean the garbage out of your own backyard, if you know what I mean. Some things happened down there that I’m not real proud of.”

“Yes. Certainly. Let’s skip the bio and talk about this truck stop.”