The long stairway ascent to the original cut-glass front door of Mark Anderson and Amy Brundrett Anderson’s 1927-built Kessler Park home is worth the climb, if only to catch a view of the surrounding tree-lined, hilly streets—and to study the intricate, decorative plasterwork on the entry’s rotunda. Built at a three-way intersection on a rocky hillside—most likely by famed Dallas architect Clifford D. Hutsell, though records are lost—you can easily imagine Roaring Twenties party guests filing into the stately Spanish colonial.

These characteristics are what lured Mark, a physician, and Amy, an attorney, to purchase the home in 2016. That they would settle in Oak Cliff was of no deliberation—Amy’s grandfather and father grew up there, they love the neighborhood’s architectural character, and they frequent the Bishop Arts District. And, Amy wanted a basement. 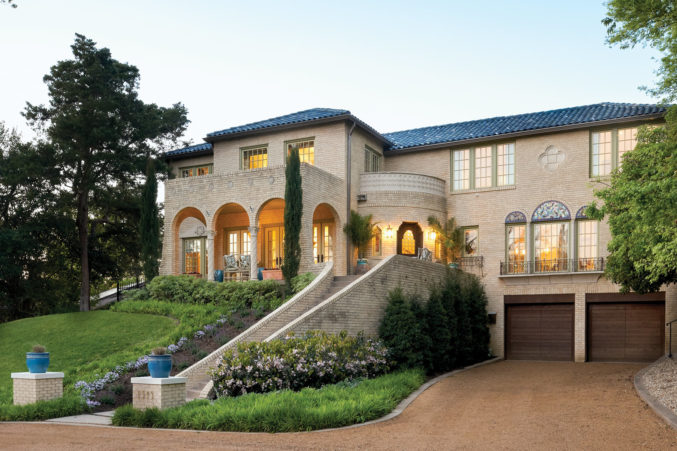 The Andersons had lusted over the Spanish Colonial’s exterior long before they owned it.
Nathan Schroder

“We aren’t formal, and we didn’t want our house to feel too stuffy.”

They eyed the home for months before their broker filled them in on its hip-pocket listing—and were only further taken by the interiors. The previous owner, Bryan Trubey (the Dallas architect behind AT&T Stadium), had completed a meticulous, period-accurate expansion and renovation. While preserving architectural details such as the original wrought-iron stair rail, Rookwood Pottery fireplace tiles, and gridded windowpanes, he also kept to the home’s more modern lean with unadorned baseboards, simple molding, and off-white walls.

It was a perfect marriage of styles for Mark and Amy: Mark prefers the minimalistic and Amy admires antiques. Their proclivities—and need for furnishings and art for the entire 4,800-square-foot home—led them to seek out an interior designer. But numerous interviews proved fruitless. “Their solution to design was to put more pillows on everything—and I hate pillows,” Mark says. Then came their sixth appointment, with Dallas-based interior designer Margaret Chambers, ASID, RID, of Chambers Interiors & Associates, Inc.

Chambers, a three-decades-running designer, knew from the onset how to temper some of Mark’s more unusual requests, including a dramatic, boudoir-esque red and black master bedroom. “She rightfully should have walked out of that first meeting,” Mark says. “But being the person she is, she said, ‘I can do something that will work.’ ”

There’s nary a combo of the two shades in the bedroom today—and Mark is fine with that. Instead, there are white walls, Peacock Alley bedding and draperies to match existing master bath tiles, and neutral grass cloth–wrapped nightstands. In fact, the only true hints of color throughout the entire home are blues and greens, a tribute to Trubey’s vision. He had exterior windowpanes painted in citrus green and interior doors and windowpanes in a pale blue-gray—hallmark traits Chambers and the Andersons didn’t want to touch. “It was a challenge to make the pale blue-gray work throughout the entire house,” Chambers says. “But it led us to come up with innovative solutions.” 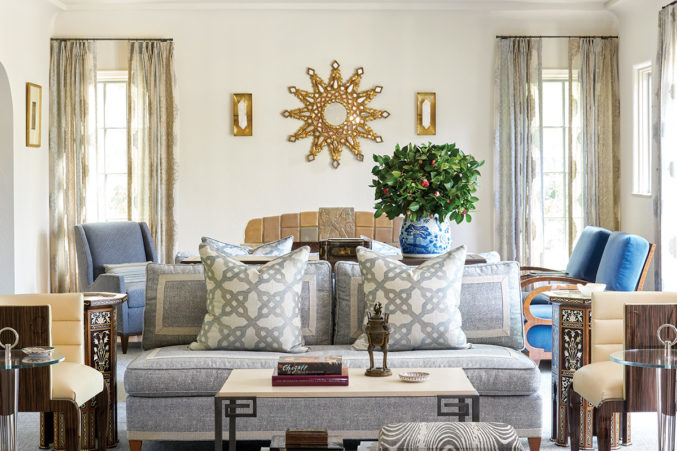 The Andersons’ only other wish was to create inviting spaces for entertaining. “We aren’t formal, and we didn’t want our house to feel too stuffy,” Amy says. “We wanted comfortable but well-designed rooms where guests felt at ease.”

Chambers—who worked in tandem with Chambers Interiors senior designer Allen Keith, Allied ASID, on the project—brought in pieces with a multicultural bent to ignite conversation and establish a “clean, simple, warm, interesting,” aesthetic, she says. In the formal living room, they blended Art Deco Macassar ebony chairs with Chinese bronze statues, Syrian bone-inlay tables, and a 16th-century Indian textile reproduction from Ceylon et Cie. The dining room is a nod to Italy complete with a vintage 1950s Murano glass chandelier by Paolo Venini from John Gregory Studios and antique Italian prints from Vinyard Frame Design. The guest room is a tribute to Africa, and the Bulthaup kitchen cabinetry, which Trubey installed, was handcrafted in Germany. “Margaret was skilled at making our aesthetic desires acceptable,” Mark says. “She wove it all together.”

And though it took a virtual trip around the globe to bridge their styles and make their Oak Cliff house feel like home, now, Amy says, “We wouldn’t want to be anywhere else.”