Here’s a hypothetical: You own a jillion exquisite Chanel handbags (among other treasures). You’d want the world to know it, right? Or—c’mon—at least your best friends and family. Not if you’re Lori Landes, a Highland Park mother of five, who owns an astonishing collection of Chanel and has no impulse whatsoever to show it off. In fact, we had to beg to take a peek at her closet.

Landes is very private, which we admire greatly, and she is also one of the most passionate people we’ve ever met. After a few minutes of touring her space, whatever shy notions Landes had about sharing her expansive collection of handbags fades as she begins to open drawers, doors, and cabinets. She speaks about each bag as if discovering its virtues for the first time, like a wide-eyed child in a candy store of her own making. “That brown one,” she says as she points to a bag in a display case. “It’s just not me. This, here, is my favorite bag. The striped one,” she says as she picks up a black-and-white striped shoulder bag with the iconic woven leather and chain strap. “There’s no rhyme or reason, but I used that bag longer than any bag I’ve ever had.” (It also happened to be the second Chanel bag she ever purchased.) Then she points to the famous graffiti-print backpack emblazoned with the signature double Cs—it was the impossible-to-find “it” bag in summer 2014 after the Kardashian clan was photographed carrying it. Landes has two—one for each daughter, who will eventually inherit Landes’ sizable collection.

Landes’ obsession started with a Gucci. When she was a teenager, Landes and her mother would travel to Europe from their home in Flower Mound to buy bags. “We’d come home with suitcases of purses,” she says. She had her other phases—chiefly a short affair with Louis Vuitton—but no other brand quite captured her like Chanel. “It was really about the story behind it. I became intrigued,” she explains. For 13 years, she has purchased the Paris design house’s bags, carefully curating her collection. Two years ago, she decided she needed a proper system to exhibit and organize each piece. She worked with California Closets for six months perfecting the space. “I wanted to be able to see in. I wanted it clean with the least amount of hardware and pulls,” she explains. “It’s like my store [West Coast Vibes]. I knew how I wanted it right from the beginning.” But don’t ask Landes how many bags she owns. She’s lost count. It was only after unpacking her bags to place them in her new closet that she realized she already was out of space.

As Landes pulls out beach bags, luggage, wallets, crossbodies, and pouches, she tells the story of her first Chanel bag—a classic black over-the-shoulder tote: “It’s called The Shopper. It was hardly used and not my style. I used it for one week.” Then, she gave it away. After finding out that her sister loved the bag, she was surprised to learn it had since been discontinued in the States. So she asked a friend—who also happens to be a Chanel employee—to help her purchase one in Hong Kong. (Landes rarely flies overseas these days but for one recent exception to attend last fall’s Chanel runway show in Paris.) 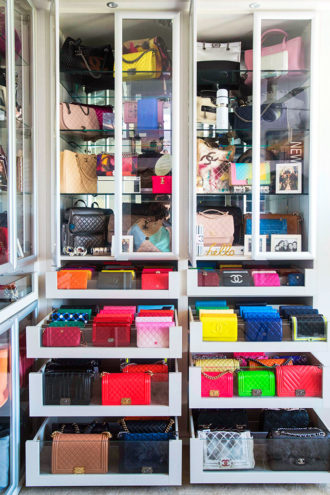 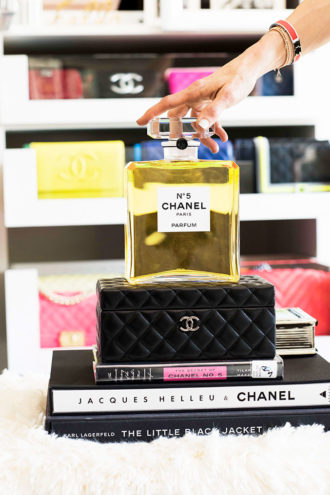 When Landes embarked on a closet makeover with California Closets, one of her specifications included felt-lined drawers to protect each wallet and clutch from color transfer.

And that’s the complexity and charm of Landes’ obsession—it’s an earnest passion where the fun is the hunt, but at the same time, she takes none of it too seriously. She isn’t afraid to hand off a bag she doesn’t love. Plus, 80 percent of her collection has never seen the light of day. (She prefers larger bags to lug around her small children’s diapers and gummy snacks.) “I grew up a tomboy. I rode a motorcycle. I grew up fishing, killing snakes, and riding horses. So I still have that instilled in me. I don’t want to say ‘look at me’ or go around talking about it,” she explains. “It’s about the art. That’s what I collect.”