“As soon as I saw you, I knew adventure was going to happen.” 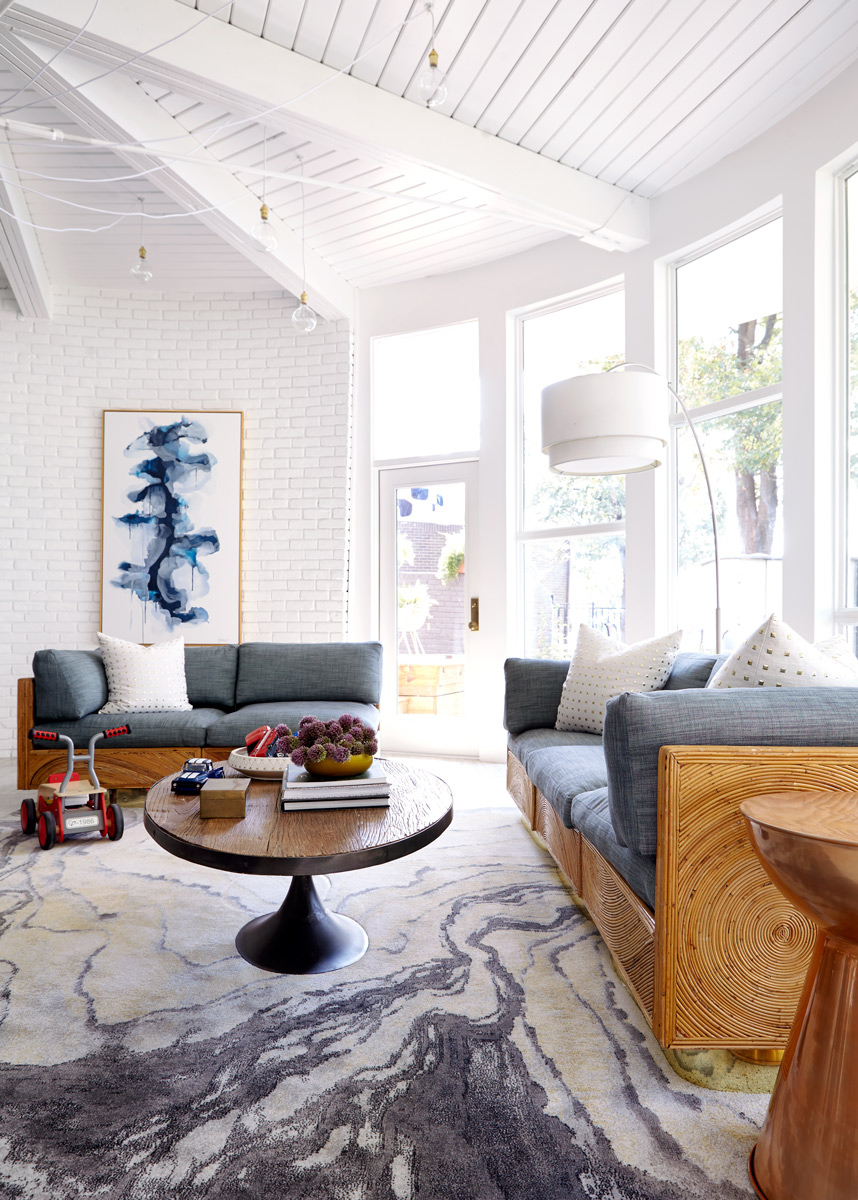 Vintage sofa is from Scout Design Studio is upholstered in Kravet’s #31754/13. The pillows were covered in Fabricut fabric and made by Designer Draperies. Eddie found the coffee table at Restoration Hardware and picked up the side table at Target. Arc Lamp is from Crate and Barrel. Artwork is a custom piece by local artist Kristen Dowd. Swag chandelier is from Hangout Lighting. Photo by Par Bengsston
Photo by Par Bengsston
While Winnie the Pooh may have said it first, Eddie Maestri and Adam Moore shared the sentiment when they stumbled upon the offbeat little property fronting Cedar Creek Lake.

Realizing their modern farmhouse in Lakewood was lacking in outdoor play space for their 3 1/2-year-old twin boys, Ethan and Elliot, the dads started contemplating a second home on the water. They concentrated their real-estate search on Cedar Creek Lake for its drive-time desirability, just 60 miles southeast of Dallas. The proximity to the city meant they could kick back at the lake with their boys every weekend.

In an area populated by clapboard cottages and A-frames, the couple wanted something different. Routine website hunting turned up a listing on Trulia, a drab, yet interesting midcentury modern. Eddie, an architect and principal of Maestri LLC Architecture + Design, instantly saw its potential.

The residence, which Eddie suspects was built in 1965—making it one of the earliest homes on the lake—didn’t look like a lake house at all. “The style inside was fighting the style of the house,” he says, its interiors burdened with heavy furnishings, textured brown walls, and dark-stained ceilings. “I thought I could enhance the midcentury aspect of it.”

“I loved the fact that the kitchen was small and kind of tucked away, but it still could look out onto the lake,” he says. “We can be in there cooking and can see the kids if they’re outside playing.”

Sweetening the deal, Adam’s parents, who live in Houston, decided to go halfsies on the vacation home. “We don’t have any family in Dallas, and we thought this would give us more reason to get together more often,” says Eddie. “And as the boys get older, they’re going to get busier with soccer practice and activities. I didn’t want to make a bad investment—we have this house, but we’re never there.”

The family closed on the property in March 2015 and quickly started construction, gutting nearly the entire home. Customizing the home to fit their family involved closing off a dining alcove that opened onto a hallway and building a wall to create the kids’ bunk room. “Even though the room is tiny, it still fit what we wanted the house to accomplish,” says Eddie. “We want the kids to be outside the whole time we’re there.” The smart modification created an entry area that the home was previously missing.

Dismantling the entire back of the house and installing floor-to-ceiling windows rendered a panoramic view of the lake from the family room and the master and parents’ bedrooms. An added bonus: The new family-room windows frame a bull’s-eye sunset every evening. 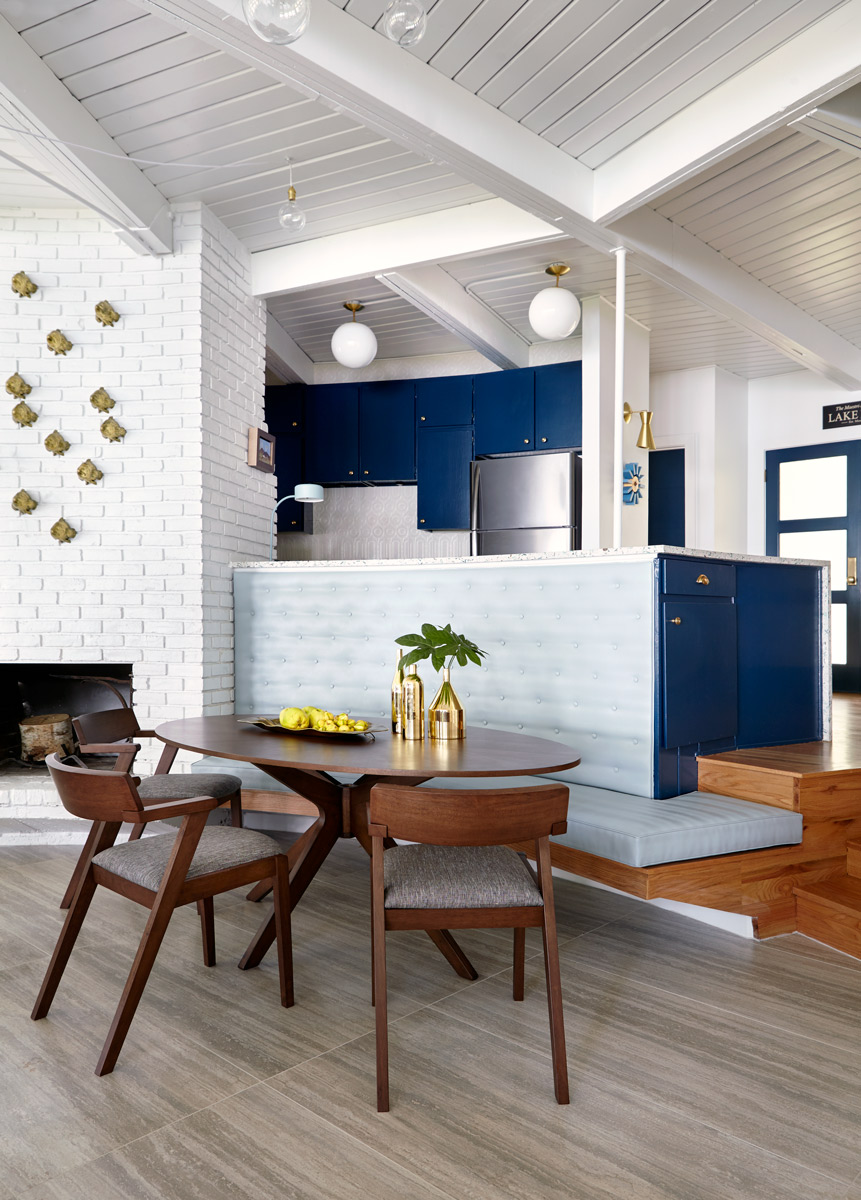 Dining table and chairs are from Bryght. The vinyl covering the banquette is Kravet’s “Brina” Arctic was built by L+B Custom Upholstery. Kitchen globes and brass wall sconce are from Cedar and Moss. The fireplace is decorated with gold fish from CB2. The wall tile in kitchen and floor tile in main area are from Concept Surfaces. Photo by Par Bengsston
Photo by Par Bengsston
Further revisions included joining an existing closet and a half bath to create a full-size bathroom and converting another half bath into a kitchen pantry to accommodate storage. But not everything was left for scrap. Eddie preserved one of the 1960s bathrooms. “I thought it was charming,” he says. The savvy architect also utilized the existing hearth in the family room in the design of the aqua vinyl banquette.

In the kitchen, Eddie resurrected the simple, curvilinear wood cabinets with a few coats of deep blue-green paint, which he repeated on all the interior doors. A couple appliances and a contemporary backsplash were new additions, along with a blue-green Vetrazzo kitchen countertop (a terrazzo-like material made with recycled glass) with a waterfall edge “to dress it up and make it look a little more modern.”

He exchanged all the old hardware and fixtures for shiny new brass versions, including the living room fixture and rope sconces outfitting the master bedroom that he acquired from Etsy shop Hangout Lighting.

“I wanted it to be light and bright,” Eddie says. “That way, when you’re in the house, it brings your eye to the water.” A palette of deep lake-inspired hues unifies the spaces and pops against the white walls and natural, honey-colored hardwoods spanning the home’s upper level.

When it came to furnishing the round living space, rather than mimicking the bow of the family room with a curved sofa, Eddie opted for a squared-off, ’70s rattan sectional with a brass plinth he found on the Scout Design Studio website. “I called them immediately and said ‘I’m coming to buy this couch!’” he says. Eddie particularly liked that the sofa made for a striking vignette when looking in from the backyard.

He furnished the home with a mix of current and vintage finds from area shops and online retailers. To wit, a vintage Eames Lounge chair in the family room takes chic respite on a new Feizy rug that reminds Eddie of a lake bottom. “There’s a lot of stuff that we had to buy, but I wanted it to feel like home, to feel collected,” he says.

Sunny Palm Springs was the inspiration for the home’s exterior. Fresh coats of gray and white paint covered over the brown. The old doors were swapped for a more stylish set, and the porch was tiled to impart a more dressed-up finish. Potted foxtail ferns and boxwoods cemented the vacation-home vibe—the front lawn already becoming roost to a pair of ornamental flamingos. 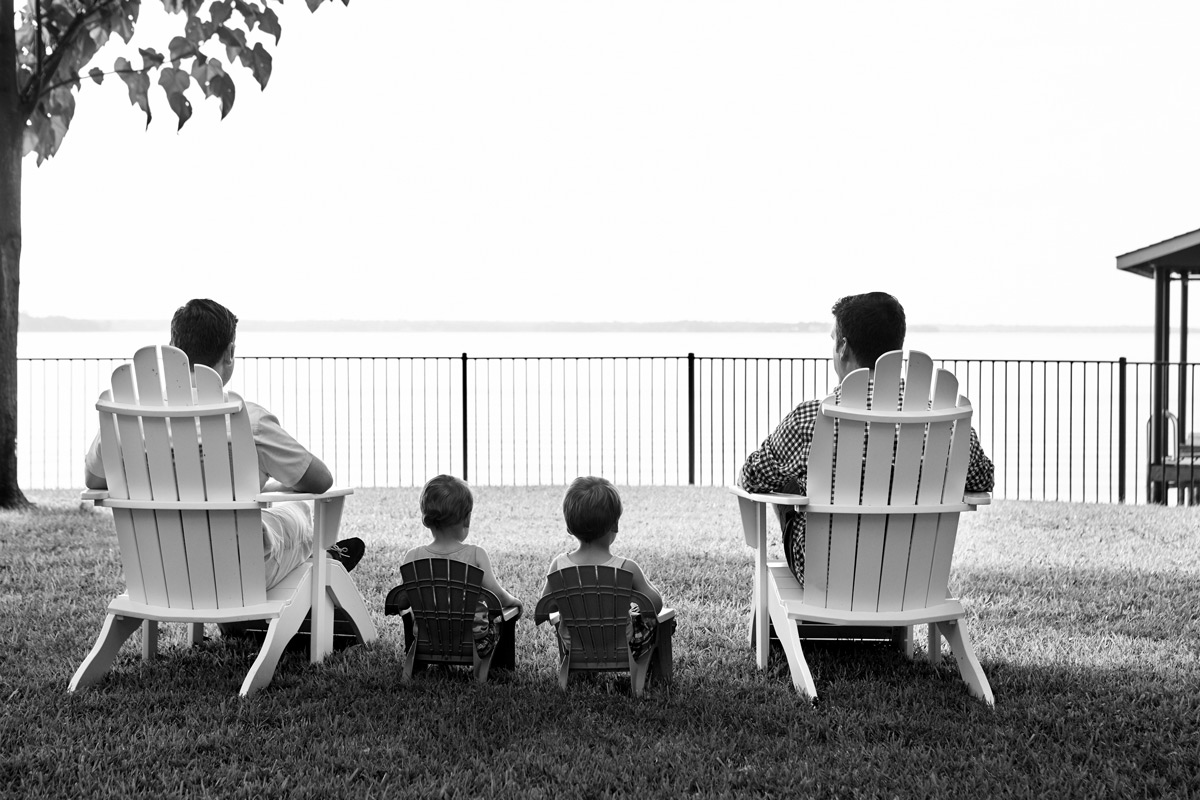 “It’s nice to get away from Dallas—to have our time off.” —Eddie Maestri, architect/homeowner. Photo by Par Bengsston
Photo by Par Bengsston
The home is living up to all that potential Eddie first imagined. The family has already purchased a pontoon boat for lake excursions. (After all, what’s a dock without a boat?) “The kids love it,” Eddie says. “They can run around and be boys and get muddy. We just hose them down in the yard and let them play.”

“It’s nice to get away from Dallas—to have our time off,” he says. Plenty of time, in fact, for new adventures and for creating lifelong family memories.