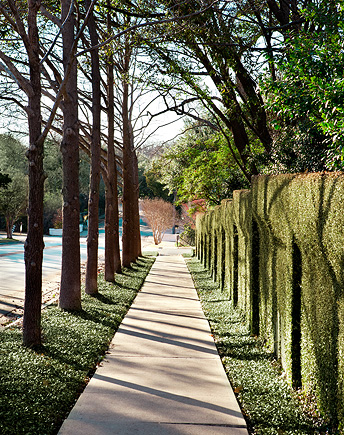 photography by Josh Martin
photography by Josh Martin
Local lore has it that each of the original 61 homes within the Northern Hills subdivision came with a chicken coop, free of charge. You won’t see any chickens wandering the streets these days, but the neighborhood hasn’t changed too much since it was established in 1920. It’s still quiet, tight-knit, and quaint, though it likely has a much more urban feel now with its proximity to some of Dallas’ hottest areas. The McNeny brothers, the same men who developed the M Streets, developed this neighborhood, and it has a similar feel on a more intimate scale. Remodeling signs appear more often than “for sale” signs here.
Population: 90 properties, 61 of which are original homes now included in the neighborhood’s conservation district.
Location: Northern Hills has only a handful of streets. The boundaries of the conservation district are Armstrong Avenue (one side of the street is Northern Hills, the other is Highland Park), Overbrook Drive, Abbott Avenue, and Glenwood Avenue. The subdivision also includes Springbrook and Edgewater streets, which are zoned for duplexes.

Average lot size: .23 acres
Where to go: Though there aren’t any businesses within Northern Hills proper, the Knox part of Knox-Henderson is easily walkable. Residents have the option of saddling up to the soda fountain at the Highland Park Pharmacy or sitting by the giant hot dog at Wild About Harry’s for a frozen custard. (“Harry knows me better than I wish he did,” resident Frank Roby says.) Residents also enjoy easy access to the Katy Trail.
Why Northern Hills: “Location, location, location,” says resident Fred Fulton, who moved into the area in 1983. Home styles range from contemporary to Tudor to Dutch Colonial to Spanish, most built in the ’20s and ’30s. Although the average lot size is about a quarter-acre, some are as large as half an acre. Just across the street on Armstrong, families can pay a higher home and land price for their children to attend Highland Park schools. “You can afford a lot of private school for that,” Fulton says of the home price differences on the street. The neighborhood association, of which Fulton is president, led the way on a three-year journey to become a conservation district, a move spurred mostly by privacy as people in smaller homes were afraid their neighbors would be peering in on them from above.