Expect a trend toward luxury development as well as construction issues stemming from high materials costs and an inability to find skilled labor.
By Jeremiah Jensen | January 8, 2019|9:00 am

Urban Dallas is suddenly seeing the launch of a multitude of ultra-luxury residential towers. They include 41-story Atelier and 28-story HALL Arts Residences in the Dallas Arts District, the 39-story The Victor in Victory Park, the 22-story The McKenzie in Knox-Henderson, and the 60-story AMLI Fountain Place downtown. Designed to catch the wave of downsizing baby boomers, these ivory towers come with top-of-the-line amenities and finish outs. But with so many projects set to deliver at once, questions about occupancy linger.

Created by the Tax Cuts and Jobs Act of 2017, Opportunity Zones give investors a way to avoid taxes by redeploying capital gains into businesses and real estate in challenged areas. DFW is home to 52 zones; 18 lie within Dallas city limits.

Thanksgiving Tower got some welcome news when The Beck Group announced plans to move deeper into the urban core, leasing three floors in the 1.5 million-square-foot high-rise on Elm Street. Not long after, Willis Towers Watson revealed plans to consolidate its suburban locations into Ross Tower, where it also leased three floors, and Payless Shoesource took a full floor in Bryan Tower for its corporate offices. Meantime, work began on the $100 million redevelopment of AT&T’s global headquarters on Commerce, between Akard and Field streets. Given the rent differential between office space in Uptown and the central business district, and with a burst of new residential, hotel, retail, and restaurant development underway downtown, occupancy rates should continue to tick up. 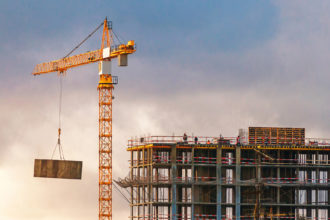 It’s a confounding catch-22. North Texas construction firms are seeing a bounty of new business opportunities, but a stubborn lack of skilled labor and skyrocketing materials costs are putting extreme pressure on project timelines and margins. President Trump’s tariffs on steel, the pre-existing tariffs on Canadian lumber, and rising interest rates are added complications. Developers and builders will need to get creative to make the numbers work on new endeavors. Also look for the leverage of innovative construction techniques and technology—including modular and prefabricated builds, 3D printing, and automation—to help alleviate the situation.

Even as others around them prosper, three significant North Texas real estate projects have had problems getting across the finish line. Wade Park, once heralded as part of the former $5 Billion Mile in flourishing Frisco, narrowly escaped foreclosure during several consecutive months, with Atlanta-based Thomas Land & Development experiencing financing woes. Then in early October, Stan Thomas told the Nashville Business Journal that he was securing funding to restart work at the 174-acre site. But two months later, the project was again posted for foreclosure. Then there’s Midtown. Beck Ventures has not made much progress in its redevelopment of Valley View Mall at the high-profile intersection of LBJ Freeway and Preston Road. But KDC/Seritage Growth Properties and Hillwood/EF Properties are pursuing formidable new developments on the fringes of the site. Lastly, there’s The Drever, a $430 million rehab of the 52-story former First National Bank tower in the heart of downtown Dallas. Cienda Partners was announced as a new backer of the project in October. How will these stories play out in the coming year? It is anyone’s guess.