Mark Masinter and Matt Alexander are changing how brands sell and shoppers shop.
By Tara Nieuwesteeg | August 9, 2019|10:00 am

Subscribe
Advertisement
Take a break from the sun-scorched pavement of Plano’s Legacy West and gaze upon the future. In this case, it’s anchored at one end of a meticulously planned oasis of suburban consumerism. Sleek glass doors are fronted by a smiling, brown-jacketed employee; behind him lies a room full of merchandise that has been carefully curated for the savviest of shoppers.

When you first walk in, you’ll see a reading nook dotted with TASCHEN’s shrink-wrapped art books, which blurs into Prim & Proper, the in-store bar and restaurant. To your right is a glass case that explains how scraps of plastic are converted into Rothy’s machine-washable flats, which are so popular that the Facebook group “Rothy’s Addicts” has more than 13,000 members. Beyond that is a mini-boutique of dresses and bags from Draper James, a syrupy-sweet southern brand that Reese Witherspoon named for her grandparents. To your left is a wall lined with Stadium Goods’ coveted but impractical limited-edition footwear, worshiped by sneakerheads worldwide. There are air plants in geometric planters and erectile dysfunction pills in sleek packaging. Sonos speakers play relaxing music overhead.

Whether it’s plastic bottle beginnings or inspiration from an Oscar-winner’s southern grandparents, every brand here has a story. And by the time you read this paragraph, some of them might not even be in the store anymore.

But that’s the nature of Neighborhood Goods. It has been hailed as a disrupter in the retail space and called the next iteration of a department store. By curating a rotating cast of 35 to 40 direct-to-consumer brands, the model combines a traditional store environment with the excitement of a pop-up shop and the ease and efficiency of technology. It’s an interactive billboard that gives consumers the chance to see brands they’ve only clicked on, and gives brands the chance to test their products in a physical space. A win-win.

Even with the mash-up of brands, Neighborhood Goods feels seamless, with its light tones and inviting greenery. There’s an app you can download to make your visit even more integrated. Cameras throughout the store capture rough demographics that help brands better understand their customers. The brown-jacketed employees aren’t salespeople, says General Manager Coy Barton, but storytellers, trained to represent and explain the brands that find temporary homes in Neighborhood Goods’ 14,000-square-foot space.

“It’s not about the transaction, it’s about the experience,” says Barton, lingering near the Rothy’s shoe display. “You can come in and experience the brand; you can try on the Rothy’s shoe that you’ve seen online but have never physically seen. And whether you transact on their website, our website, or in the store, it’s a success story.”

‘The Echoes of My History’

What if physical retail was focused on product testing and creating a sense of community, rather than on transactions? That’s the question Matt Alexander contemplated as he worked on his “manifesto,” a six-page document that would eventually spawn Neighborhood Goods. Mark Masinter, founder of Dallas-based Open Realty Advisors, had challenged the young entrepreneur to come up with a fresh idea. In 2017, the two drove out to the under-construction site of Legacy West and took a look at what would become Neighborhood Goods. Masinter asked Alexander what he would put in the space. Then he dropped him off at home, and Alexander began divining a plan.

“What I wrote down is that we’d build something very human. It would be editorially driven. It would be focused on an ever-changing landscape of different brands that would be relevant to a given market and customer,” Alexander says. “And in that, you heard all the echoes of my history, all the ideas I had worked on up to that point.”

From a booth in a Dallas WeWork space (he has an office here, but not for long; the growth of his corporate team has warranted a move to 5,100 square feet nearby) Alexander, who sports a bright red beard, talks about how his experiences set the stage for his role as CEO of Neighborhood Goods. He grew up in the London suburb of Weybridge, where he developed an early interest in technology. As an adolescent, he began blogging about his tinkerings, and wound up with a tidy following. As school intensified, though, the blog slipped to the back burner.

After graduating from SMU, Alexander’s plan was to join a startup and work to gain credibility until he could launch his own. By the end of 2012, he was interested in e-commerce and angling to build something editorially driven. “I was seeing a lot of companies building personal stylist concepts and felt the role of a good editor could have been extremely applicable, where you could have someone who could curate an outfit or series of products on an exclusive basis that would be distinct and localized to a specific market,” Alexander says. “That became my first idea.”

In 2013, he launched Need, an online “shoppable men’s magazine” that released a clothing collection every month. Under his umbrella brand, Edition Collective, Alexander next started Foremost, which targeted women. Soon Alexander and Bryan DeLuca, CEO of Foot Cardigan, were mulling over the idea to create a pop-up shop for their products. The idea took flight in 2014 and became Unbranded, a Dallas pop-up market designed to showcase local brands.

Alexander sold Edition Collective in 2016 to Q Fifty One and joined the company’s digital division. Meanwhile, Masinter, a retail seer whose clients include brands like Kate Spade, J. Crew, and Apple (Steve Jobs called Masinter in 2000 for guidance on launching his Apple stores) had watched the rise of pop-ups and had his eye on Alexander. “Many exciting new brands were emerging and realizing that a physical manifestation of themselves was going to be a critical component of their growth,” he says. “I felt like there was an opportunity, a white space, to create essentially a new version of an old idea.”

After their field trip to the Legacy West construction site, Alexander finished his manifesto, and sent it to Masinter. In it, Masinter saw the blueprints of what he had envisioned—a sketch of how they’d take that white space and turn it into an innovative—and profitable—reality.

The once-widespread idea that online shopping would supplant physical retail has been debunked. In fact, an IBM retail study predicts a 3 percent increase in brick-and-mortar retail sales for 2019. And physical retail still accounts for around 90 percent of all sales.

“The consumer today wants great customer service, fresh offerings, a good, enjoyable experience, and they want to be able to use technology to their advantage,” says Alan Shor, president of The Retail Connection. “To be a successful retailer, you have to do all of those things well, both on the technology side, on the e-commerce side, and on the physical store side.”

Originally a lawyer by trade, Shor co-founded his Dallas firm with broker Steve Lieberman, as a place where retail and real estate meet. The company provides services to about 300 multi-unit retail and restaurant clients and represents 265 retail properties—a formidable reach that facilitates wide-ranging insight into the market.

For example, Shor says that although plenty of stores are shuttering, some big-name brands are evolving—like Kohl’s, which announced a partnership with Amazon in April and has plans to rent out interior store space to Planet Fitness and Aldi. Fitness apparel brand Lululemon creates an experiential customer community through in-store events and yoga classes. And Walmart, which grew its same-store sales by 3.4 percent during the first quarter of this year, has purchased several digitally native brands and leverages technology for customers’ convenience.

When Shor learned about Neighborhood Goods, he was struck by its seamless combination of experience and technology, and became an early-stage investor. (He now sits on the company’s board.) “To me, this is where retail is heading,” Shor says. “Neighborhood Goods is a 360-degree omnichannel experiential way of shopping.”

Masinter and Alexander took the idea for Neighborhood Goods to Kirsten Green, managing partner of Forerunner Ventures, in 2017. Spurred on by her enthusiasm, the company incorporated with Masinter and Alexander as co-founders that August. Later that fall, they accrued $250,000 in pre-seed capital. In spring of 2018, Neighborhood Goods raised an additional $5.7 million, with Forerunner leading the round and Maveron, Global Founders Capital, NextGen, and others participating. Ultimately, another round of funding led by Global Founders Capital would bring the amount of total seed capital to around $14.5 million.

The Plano store opened in November 2018. An early event featuring Serena Williams (who is also an investor) had people snaked outside the doors, despite a hailstorm. As predicted, consumers were hungry to see popular digital brands in person, and the store’s calendar quickly filled with Instagrammable events intended to create a sense of community around the store. Things were off to an auspicious start.

“We have plenty of time to ruin everything still,” Alexander says with a smile. “But no, we’ve started in a really great way: a great team, amazing investors, a great set of brands, and the locations we’re expanding into are very exciting.”

Back at Neighborhood Goods on that sunny afternoon, you inspect Gardenuity’s customizable gardens-in-a-box and peruse Wild Ones’ $75 dog leashes. You envision guests at your next party snacking from Coterie’s colorful paper plates. Couples and families drift in and out, and although it’s not clear how many shoppers are purchasing goods, it’s obvious that the billboard aspect of the store is working: Consumers are seeing and interacting with the online products in person.

The bulk of Neighborhood Goods’ revenue comes from renting space to the retailers, with brands paying a fixed fee per month for a spot in the store. (There are some wrinkles that involve brands doling a percentage of sales to Neighborhood Goods; it depends on each company’s specific agreement.) Ultimately, the store relies on staying ahead of consumers’ shifting interests.

Alexander declines to provide specific numbers, but says the company has seen revenue growth both in retail and restaurant sales on a month-over-month basis. Brands are clamoring to extend their time in the store. The corporate team has grown from five employees at launch to around 20 today. New York’s popular Chelsea Market has recruited Neighborhood Goods to open its first output there this fall; the store will include a culinary component. A second Texas location will also open this year, and four to six new venues are planned for 2020.

Eventually, you finish puttering around Neighborhood Goods and bid Barton and the other smiling employees goodbye. Tomorrow, one brand might leave and another might set up shop. Next week, there might be a class on floral arrangements or a kids’ activity or a live band. Here in this department store of the future, the only guarantee is that you’ll find something new next time you wander in. And you will be back. 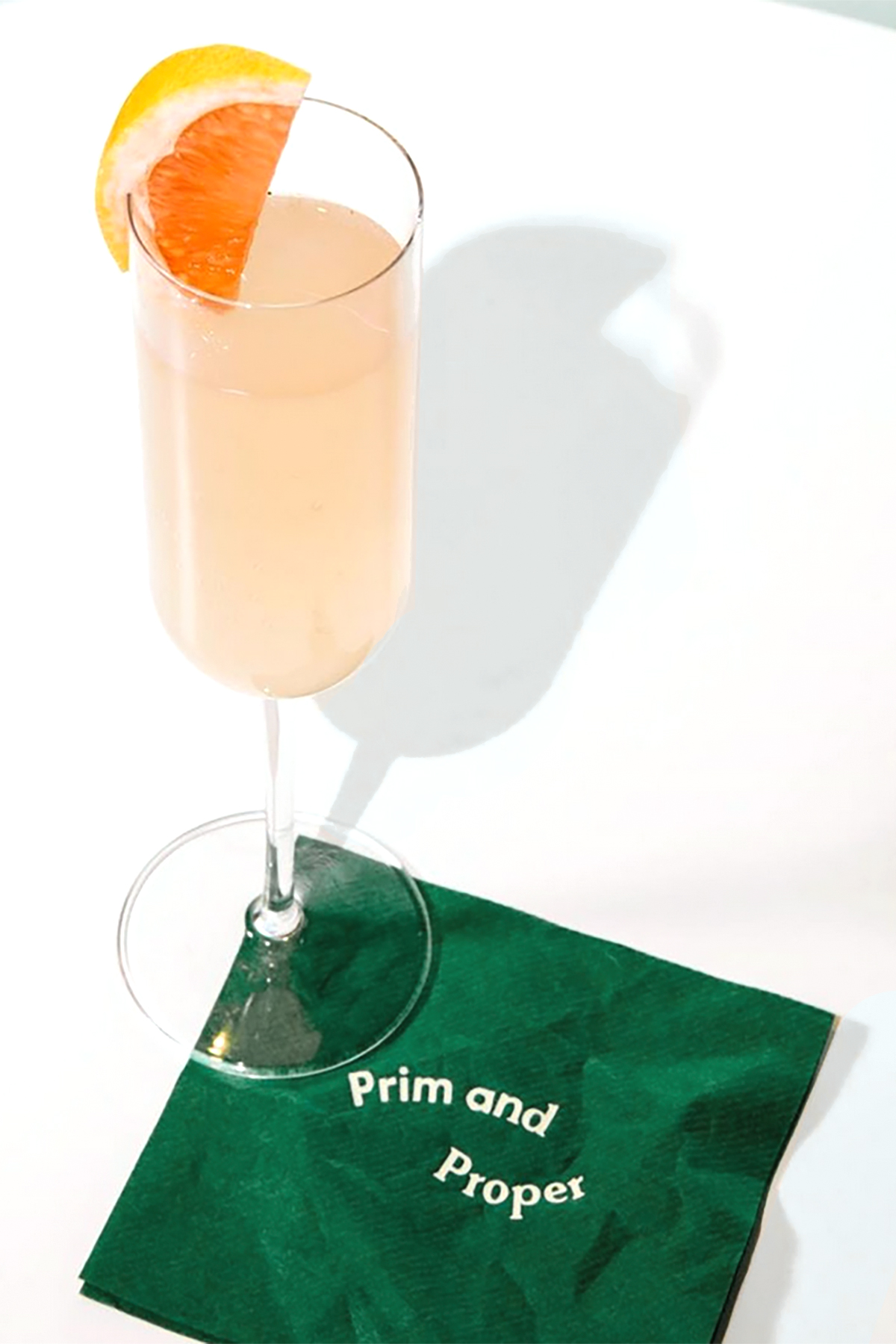 Beyond the retail items found at Neighborhood Goods is Prim and Proper, a culinary concept created in partnership with Front Burner Restaurants, the company behind Sixty Vines, Ida Claire, Mexican Sugar, and Whiskey Cake. Promising food “better than it has any right to be,” menu items range from a charcuterie and cheese board and “millennial toast” to tomato soup topped with parmesan cheese or a waygu burger served with a persimmon salad. Prim and Proper also serves coffee, as well as craft cocktails with names like “window shopper,” “bloody hell,” and “up your alley.” The restaurant is designed to be integrated into the experience. Customers can drink wine while shopping or order something on the store’s app and have the order delivered tableside.