Take a look around Kevin Hodes’ office, and you get the sense that the founder and CEO of Swypit, a Frisco-based electronic payments company, has lived a life as exotic as the McLaren GT that sits in his parking lot. Framed newspaper articles, posters from movies he has produced, and plaques celebrating his three best-selling books hang on the walls. Shelves are lined with Telly awards and other mementos of the New York native’s life. A photo of a younger Hodes with David Dinkins, New York’s first black mayor, serves as a tangible reminder of a time when he worked as a private chef on the yachts of the rich and famous.

Swypit processes hundreds of millions of dollars in electronic payment transactions a year and works with countless businesses, chambers of commerce, and other clients.

It was on such a yacht when Hodes became inspired by a comment made by the late Coca-Cola franchiser Dick Thomson. The former chef would often use his special chocolate chip cookies, as thick as they are chewy, to open up late-night conversations with some of his elite clients. “One night, Mr. Thomson told me that every time someone opened a bottle of Coca-Cola, he made money,” Hodes says. “I remember thinking, ‘That is great.’”

Growing up in a small Upstate town near Woodstock in a family of little means, Hodes dreamed of one day having a life like those enjoyed by the kind of people he cooked for. He knew he didn’t want to follow in the footsteps of his father, who worked as a corrections officer, a job many young men in his hometown grew into. Hodes instead decided to become a chef, after working as a busboy. He put himself through Sullivan County Community College, where he learned from Culinary Institute of American professors who moonlit at the school. He took a job at a New Jersey resort and bought his first car, a white 1987 Pontiac Grand Am SE with white rims. Six months later, that car was all he had when he lost his job. Hodes calls it his fork-in-the-road moment; he had to either move back in with his father and take a career as a corrections officer or become homeless. “I wound up living in my car for a short period of time, moving it around so it would not get repossessed,” he says. “I had way bigger aspirations; I knew I was going somewhere, doing something.” 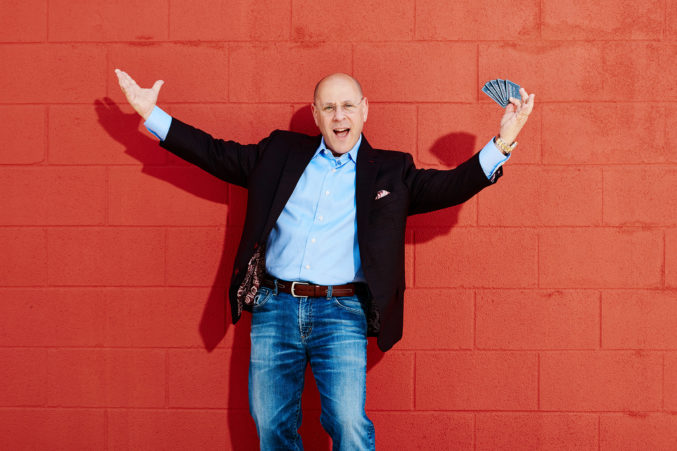 A master marketer, Hodes wants his company to be known as the “concierge” of the industry.
Jonathan Zizzo

Hodes eventually moved into an apartment in a sketchy area of Brooklyn, while he worked in food service on a boat that did lunch-time cruises in the city. One day he was walking down the street wearing his uniform, when a man came up to him and asked if he was a chef. “And I was like, ‘Yeah, what gave it away?’” Hodes laughingly recalls. As it turned out, the man worked on a private yacht owned by Al Copeland, founder of Popeyes Louisiana Kitchen, and was in need of a chef.

In the ensuing years, Hodes continued to work for Copeland (and yes, he knows Popeyes’ secret recipe) and on other luxury yachts while also holding a day job at the prestigious The Chapin School, where he’d sometimes find himself riding the elevator with Donald Trump and his then-wife Ivana. But as he approached his 30s, the newly married Hodes wanted something a little more stable. After another food-service job and a variety of sales positions, Hodes got into credit-card processing then moved to Dallas to start his own company.

Excerpted from Hodes’ contribution to The Soul of Success, Vol. 2, in a chapter called The Truth in Credit Card Processing: “Have you ever heard the saying, ‘Price, quality, or service? Choose two.’ With knowledge and a little research, you can have all three:

Instead of focusing on equipment sales, his business model was built around the actual processing of payments. Like Thomson, he wanted to make money every time someone swiped a card. And he wanted his company, the aptly named Swypit, to become known as the “concierge” of the credit card processing industry.

It took a while for momentum to build. “There’s not much money in credit card processing, at least not until you’ve built up a lucrative portfolio,” Hodes says. “I remember getting the first residual check, $60 or $80 whatever it was, and I looked at my wife Sarah and said, ‘We won the lottery.’ She said, ‘What?’ I said, ‘Yeah, right here we won the lottery. This money is going to come in for as long as we have these clients.’ So, I had to keep going at it and working hard.”

Today, Swypit processes hundreds of millions of dollars in transactions a year and works with countless business clients and chambers of commerce. Along with its Frisco staff, the company relies on a stable of independent contractors. An adept marketer, Hodes has produced online videos and written a couple of books. He also contributed a chapter in The Soul of Success by Jack Canfield, originator of the Chicken Soup for the Soul series.

Hodes has come a long way, but he hasn’t forgotten the lessons of his past. “I am always worried about losing everything, which probably comes from years of struggling without electricity and having the funds to pay for gas,” he says. “So, I work like I’m always worried someone is taking my clients, and I live as if I could lose everything at any time.”