Adam Smith immortalized “The Wealth of Nations,” but prosperity in today’s world increasingly depends on the wealth of cities. In the United States, the 100 largest metropolitan areas churn out 65 percent of all economic output. In Texas, the Dallas-Fort Worth and Houston areas account for 63 percent of the state’s economy. With San Antonio and Austin added in, the big-city share rises to 76 percent.

Cities thrive because proximity and density produce an environment where human creativity and cooperation flourish. Most economic progress has sprung from the perpetual churning of ideas and enterprises that takes place in the urban milieu.

Not all cities are equal. Looking around the country, we find huge gaps in major metropolitan areas’ economic fortunes; for every booming Dallas-Fort Worth, for every bustling Houston, there’s a struggling Cleveland and sclerotic Detroit.

In “The Wealth of Nations,” Smith linked prosperity to a political economy of freedom built upon private property, market incentives, free trade, specialization, and a culture of commerce. To find out whether the Scottish economist’s wisdom applies to the wealth of cities, we turned to an index of metropolitan area economic freedom put together by economist Dean Stansel at SMU’s O’Neil Center for Global Markets and Freedom.

Using a range of hard data, Stansel focused on three broad factors: size of government, the tax burden, and labor-market freedom. The result is a single number that locates each Metropolitan Statistical Area (MSA) on a spectrum between zero for lowest economic freedom and 10 for highest economic freedom. Stansel found large disparities in economic freedom among the nation’s 380-plus metropolitan areas—from a high of 8.52 in Naples, Florida, to a low of 3.32 in El Centro, California.

At 7.80, DFW ranks 10th among the nation’s 100 largest MSAs—with the Dallas side (7.86) a bit higher than the Fort Worth side (7.68). Houston (7.82) is in a virtual tie with DFW. San Antonio (7.53) isn’t too far behind. MSAs that score highly on the index will tend to have relatively low taxes, smaller government spending and public employment; less dependence on government transfers; pay rates largely driven by market forces; and below-average union membership. In short, these cities limit government and give markets more breathing space.

To focus on the bigger cities that are the primary engines of the U.S. economy, we looked at the 100 largest MSAs—those with populations above 542,000. We divided these MSAs into five groups of 20, arrayed from the highest to lowest in economic freedom. The freest MSAs saw their economies grow by 30 percent from 2001 to 2013, after taking inflation into account (chart 1). The next group expanded by nearly as much—27.5 percent. After that, average growth declines substantially as economic freedom wanes.

Turning to job creation, the variation in MSAs is stark. The freest 20 percent recorded average employment gains of 17 percent from 2001 to 2014 (chart 2). The rate of job creation fell by half for the second freest 20 percent, then nearly halved again for the MSAs with the lowest economic freedom scores. 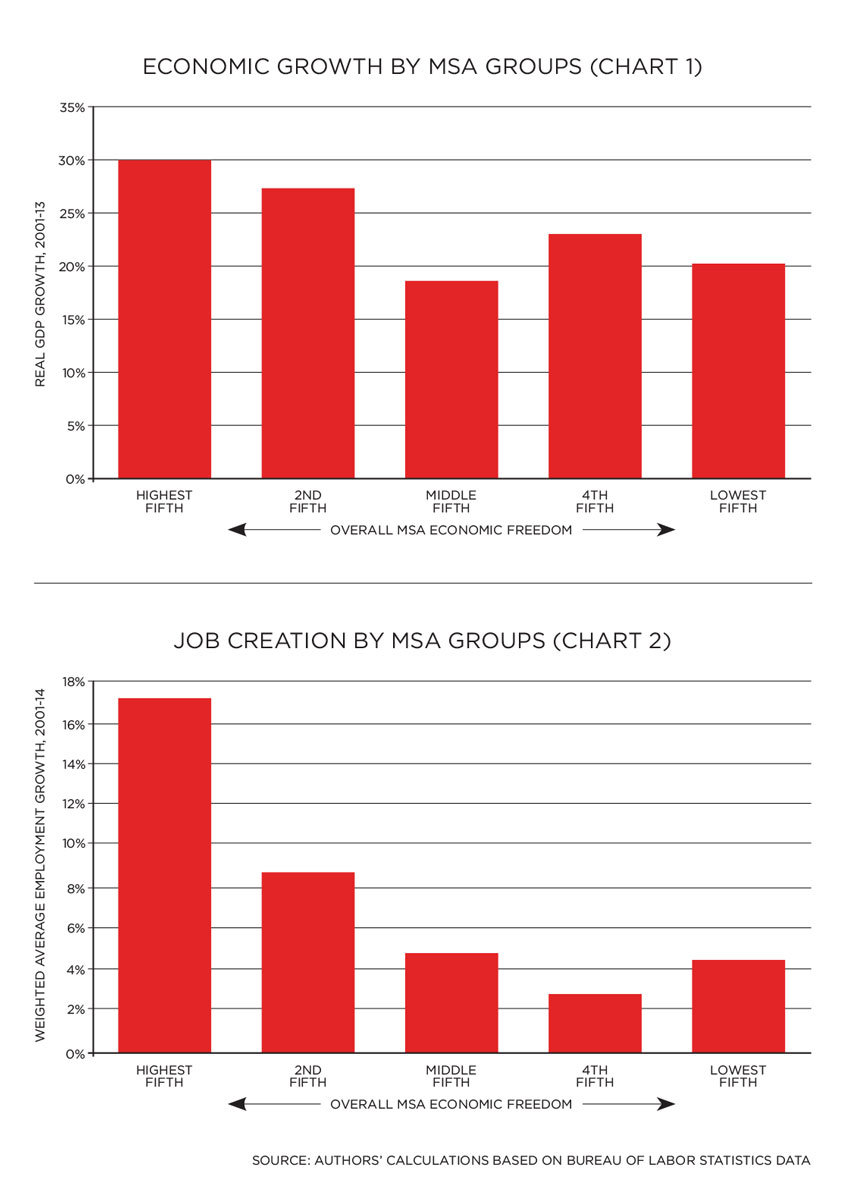 Despite its correlation with faster growth and more competition in the labor market, economic freedom doesn’t seem to drive up housing prices and everyday expenses. Quite the contrary: The average cost of living is nearly 35 percent lower in the most-free MSAs than in the least-free, suggesting a link between economic freedom and higher living standards. Housing prices contribute heavily to variances in living costs. MSAs with greater economic freedom impose fewer impediments on new housing, so supply increases blunt upward pressure on prices. The same applies to other markets; less government meddling and greater market competition help keep prices low.

The combination of low taxes and living costs makes paychecks go further. Wage rates are often quite high in places with low economic freedom, such as New York and Los Angeles. After adjusting for differences in taxes and living costs, however, average hourly wages are nearly $16 in the 40 percent of the MSAs with the highest economic freedom. Adjusted pay in the least-free group falls to $12.40.

Scoring high on economic freedom, DFW ranks in the Top 10 among big U.S. metropolitan areas in employment growth and in-migration, so it’s clearly on the right track. Our work provides a strong argument against DFW becoming more like metropolitan areas in other parts of the country. The wealth of cities, like the wealth of nations, comes from more economic freedom and less big government.

A Drink to Your Wealth