Why You Need To Know Him:

Because he and Dunhill Partners are leading a revitalization effort in the Dallas Design District, breathing new life into a storied part of town with a swath of new and diverse tenants. Hutchinson decided to make his mark on the neighborhood just east of the Trinity River after diversifying his 30-year-old commercial brokerage and investment company, which traditionally flipped shopping centers. Developer Trammell Crow pioneered the industry segment of “speculative building,” as well as the design of single-story warehouses with front-facing offices, when he built his first warehouse in the Design District in 1948 after acquiring parcels of commercial space from the Stemmons family. By the ‘70s, a once-troubled floodplain was home to a number of Crow’s warehouses. But by the late ‘90s the warehouses had begun to deteriorate, and tenants began seeking new homes. In 2006, the city approved $4.4 million in TIF funds for Crow Holdings to develop a 214-unit multifamily property with Atlanta-based Wood Partners, signaling that the district had entered yet another iteration.

Photo by Michael Samples
Photo by Michael Samples
Houston-based Lionstone Group purchased the 33-acre Design District portfolio in 2007 and enlisted Dallas developer PegasusAblon to begin redeveloping the area. A game-changing Oak Lawn Avenue exit was added to the Dallas North Tollway in 2008. Meanwhile, Hutchinson was keeping a watchful eye on his friend Mike Ablon, observing with “interest and amusement” the sweeping changes PegasusAblon was making there. By 2014, it’d be Hutchinson’s turn.

By the time Dunhill Partners and a group of investors acquired the Design District portfolio that November, Ablon and partners had increased its value by nearly $500 million, adding more than 1,300 multifamily units and occupying 500,000 square feet of commercial space with new showroom, restaurant, and retail tenants.

For Hutchinson, there are some rules of play for his venture into the Design District. First and foremost, he is dedicated to maintaining its intrinsic value.

“The Design District was seen more as a development play for someone to come in and tear down old warehouses and build high-rises,” he says. “And that’s not what we’re known for. I look at it a little bit differently than everyone else; I look at it as, the Design District needs to stay a design center that focuses on the showrooms, on the designers. They are the heart and soul of the district, and all we’re going to do is complement them with residential and retail and restaurants, and build around them.” 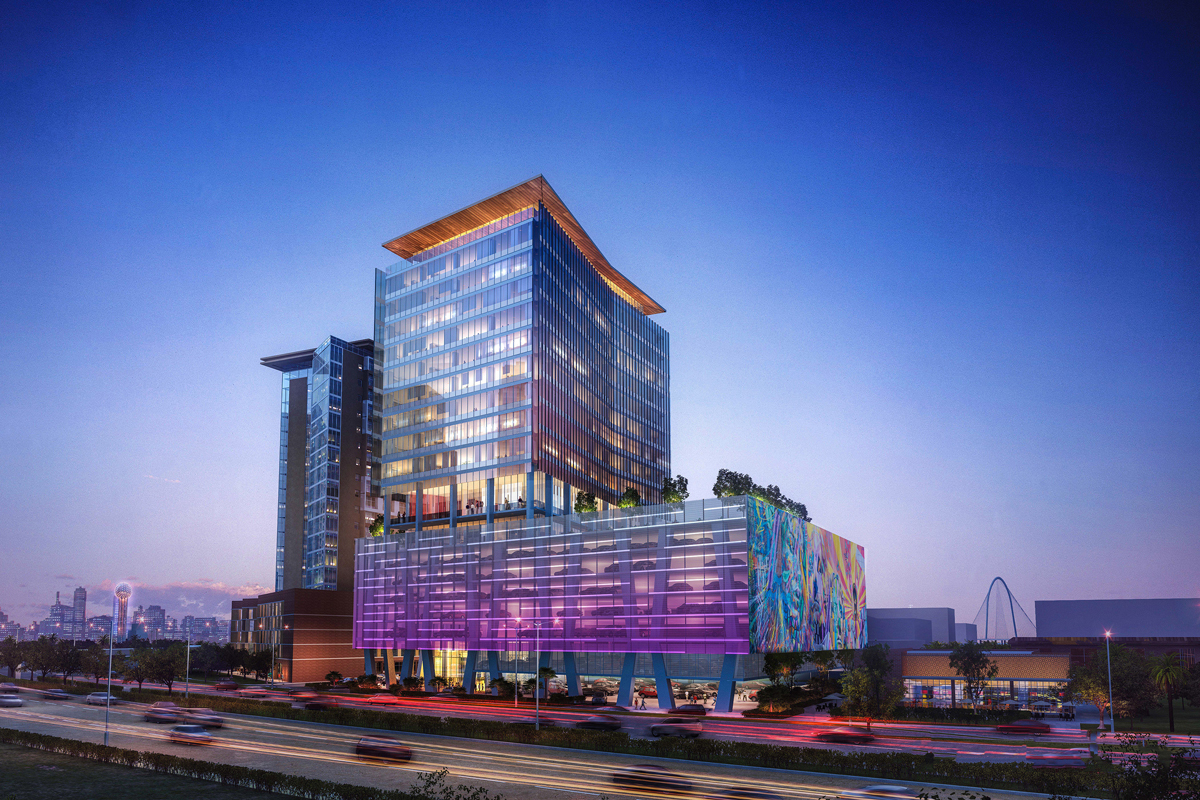 The Design District Tower will bring 240,000 square feet of office space online in the district. Rendering courtesy of Dunhill Partners
In addition to keeping those showrooms, Hutchinson has welcomed a variety of new tenants into the Design District. Mainstays Ascension Coffee and Meddlesome Moth will soon be joined by Quill, an upscale lounge from restaurateurs Richard Ellman and Joe Palladino that will open next door to John Tesar’s Oak. Tim Headington’s restaurant group, Raised Palate, has signed on to occupy 10,000 square feet of space in the Decorative Center at Oak Lawn and Hi Line (though it hasn’t announced which concepts it’ll be debuting there). Two hotel projects are also in the works: a Joie de Vivre boutique hotel topped by 250 Ilume apartments, and a 200-room Virgin Hotel by Sir Richard Branson’s British Virgin Group that will have 40 condos on top (plus a fleet of red Teslas). There will also be a 240,000-square-foot office building called the Design District Tower.

“The Design District needs office space, not for people who want to be in showrooms, but for architects, design firms, advertising and marketing firms,” Hutchinson says. Between the Design District Tower property and the 309-unit Alexan Riveredge Apartments and 400-unit Alta Strand residential properties that will open in late 2016 and 2017, respectively, new Design District venues are bound to attract  plenty of customers.

“I think that the Design District is going to go down as my legacy,” Hutchinson says. “Of all the deals I’ve done throughout all the years, this has really come home to me as what I’m most passionate about and most excited about. We plan on making this the coolest destination in the city.”