Trade makes both buyers and sellers better off—it simply has to; if not, one or the other would nix the transaction and walk away, keeping what had been offered for exchange. Because both sides come out richer without producing anything new, trade amounts to an act of economic magic, making value appear out of thin air. So allowing people to trade as freely as possible will improve the overall welfare of society. Upon this, economists, a notoriously disputatious tribe, tend to agree.

There’s a catch, though, and not a trifling one. Freer trade benefits the economy as a whole, improving the consumer’s lot with lower prices and greater variety, but it doesn’t necessarily make everyone better off—at least not immediately. As trade ripples through an economy, some companies and their workers find they lose out as a result of others’ trading activities.

Inevitably, trade’s unsettling side effects spill over into politics, with those left worse off clamoring to prevent others from trading freely. Trade barriers aren’t easy to impose within the United States—it happens, of course—but Americans aren’t at all reluctant to target foreigners with tariffs, quotas, and other restraints. Rising trade protection courts the danger of an escalating trade war, where other countries respond to U.S. actions with barriers of their own, sending trade into a downward spiral and leaving all countries poorer. For those who aren’t worried about the dangers of protectionism, we can only point to the Great Depression of the 1930s.

Protectionist pressures have been building for years, fed by frustration with the U.S. economy’s performance. Campaigning for this fall’s presidential election, both Republican and Democratic candidates are vowing to save American jobs by reversing the rising tide of imports, with fingers being wagged at China and Mexico in particular.

What does all this mean to the Texas and Dallas-Fort Worth economies? In a few words … potential stagnation for the economy.

Over the past three decades, the state and its major cities have prospered by diversifying away from oil. A big part of the Texas success story has been the embrace of globalization—doing more business with foreigners. Today, Texas has more to lose than any other state from the beggar-thy-neighbor skirmishes that mark global trade wars.

The Census Bureau tracks merchandise (goods) exports by state of origin. These data don’t capture all international trade; most notably, they exclude foreign sales of U.S. services, which for the United States have been rising faster than goods in recent decades. The goods data is all we have, and they tell us one thing for certain—Texas stands tall as an export juggernaut. The slowdown in China’s economy, the oil industry’s slump, and other factors eroded U.S. exports in 2015—and Texas wasn’t spared, seeing its overseas sales fall from $289 billion in 2014 to $251 billion in 2015. Even after an off year, Texas still leads all other states by a large margin. California, which ranked second at $165 billion, was the export leader until 2002, when Texas surged ahead.

After accounting for inflation, Texas’ exports have quadrupled since 1995, allowing the state to increase its share of the nation’s total exports from 12.1 percent to 17.5 percent (see chart). Over these two decades, America’s overall exports have risen 137 percent, so Texas has had the benefit of getting a larger share of a growing pie.

That’s not true for other big exporting states. California’s share of real U.S. exports declined from 15.9 percent in 1995 to 11.5 percent in 2015. New York, Washington, and Illinois have seen their shares of U.S. exports remain relatively flat for two decades.

At about $30 billion, North Texas ranks ninth in exports, with greater diversity of products than Houston. The region’s shipments are fairly evenly divided among machinery, computers and electronics, chemicals, and transportation equipment. The places that export more than DFW all have direct access to the sea—so Dallas can tout itself as the top exporter among landlocked metropolitan areas.

What vexes many Americans about trade isn’t exports; it’s imports. No reliable data track imports by state, but it’s a safe bet that the highly diversified, globalizing Texas economy absorbed its share of the $2.7 trillion the United States imported in 2015.

Choking off these imports would hurt Texans quite a bit. Consumers, particularly those with low incomes, stretch their paychecks by shopping for low-priced foreign goods. For many businesses, foreign goods are key inputs in global supply chains that support Texas jobs. More broadly, imports support exports. Selling to the United States helps other countries grow their economies and gives them the money they need to buy American exports, the largest share of which come from Texas. 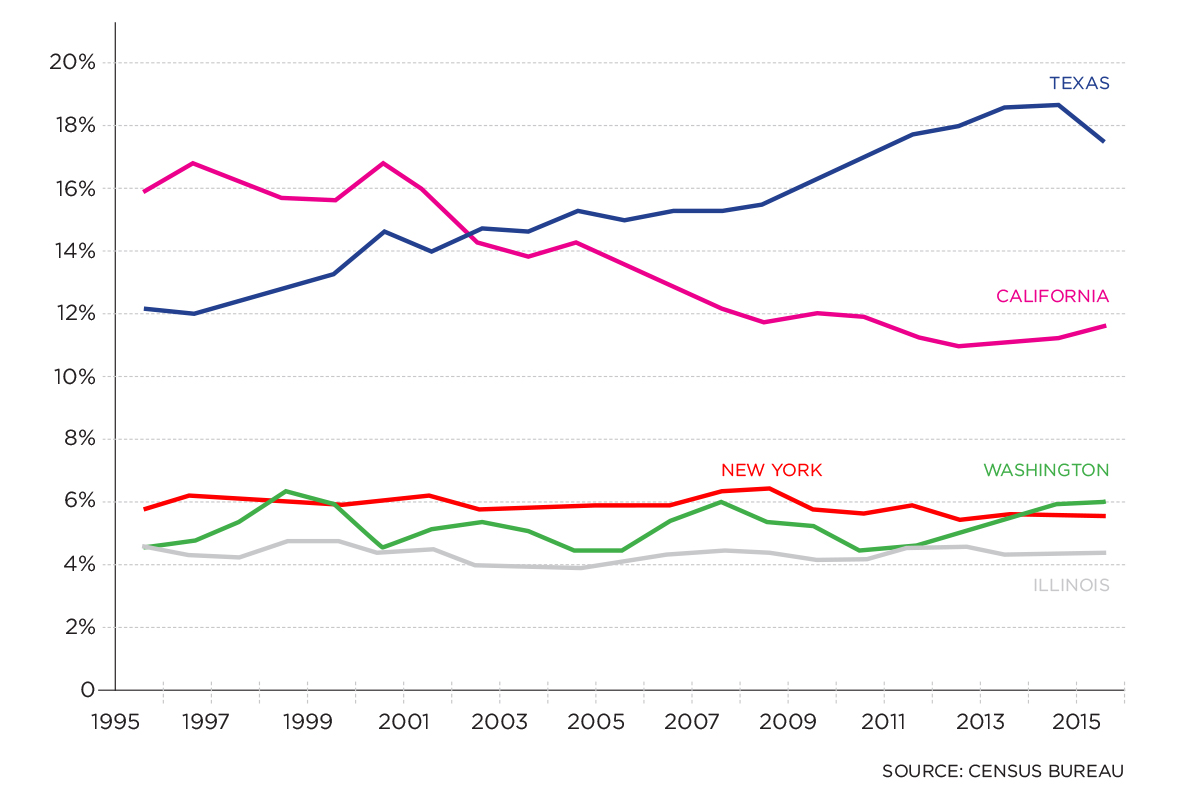 Last year’s decline in exports demonstrates all too clearly that Texas remains vulnerable to events that weaken foreign markets. Rising protectionist sentiment only adds to the risks that Texas exporters already face because of what they sell and where they sell it. Texas ships a wide range of goods to foreign customers—manufactured products like machinery and aircraft parts, farm products like cotton and soybeans, and high-tech gear like computers and electronic components. The diversity goes only so far. Oil and other related products are by far Texas’ most lucrative export—a vulnerability that will persist as long as oil prices remain low and oil exploration languishes.

A rise in American protectionism will shrink the global economy. Weaker economic activity bodes ill for the energy business and the Texas exports that feed off it. More than a third of Texas’ exports go to Mexico, a favorite whipping boy for trade hawks. Canada ranks second at 11 percent—but little anger seems directed northward. The rest of Texas’ foreign sales flow to a widely diverse set of countries in all parts of the world, with Brazil and China at 4 percent.

The close and familiar Mexican market no doubt played a large role in Texas’ export surge—but the deep trade ties built over generations leave the state vulnerable. Policies that inhibit trade with Mexico would devastate the economy of Texas’ largest trading partner, with serious repercussions for business and jobs on this side of the Rio Grande. If Mexico retaliates with barriers to U.S. exports, the toll would only get worse.

Texas businesses are likely to recover from last year’s decline in exports; market setbacks are usually temporary. Bad trade policies are another matter entirely—they stay in place and fester. Election-year political rhetoric raises the real possibility that the next president might not champion freer trade. In the trade wars that might follow, export-oriented Texas is likely to get hit harder than any other state.