“Really? This is my third office,” Rod McGeachy says when I tell him I’ve never been to La Madeleine for breakfast. “It’s really pretty darn good.”

The chain’s Preston Center location is near McGeachy’s University Park home, making it ideal for early morning meetings. Already conversant with the menu, he recommends the yogurt parfait or the eggs. I stick to my more usual order of oatmeal, picking brown sugar and almonds as my two allotted toppings, while he follows his own advice.

I pay the cashier and carry my oatmeal to our corner table where McGeachy must wait for his food. It’s 7:30 a.m., and he’s already been up a couple hours to put his body through a 45-minute “boot camp” workout that he and a few buddies engage in a few times a week. They don’t employ a trainer or coach to plot out their circuit of calisthenics and running, instead rotating those duties among themselves.

“When it’s your time to lead—because you’re calling out the exercises and counting the reps and all that—it’s amazing how much more tired you get, you know, because you’re talking and exercising,” he says. “I was thinking about it, and every day at the office is like boot camp—leading it makes it that much more tiring.”

McGeachy has spent most of his career in the apparel business, with companies like Hanes, Russell Athletic, and VF (which owns many brands, including North Face and Wrangler). He was happy working in his native North Carolina when he got “cold-called” four years ago to come lead a turnaround at Tandy Brands. The leather accessories maker had seen years of weaker sales and quarterly losses when he joined the company in late 2008.

“It was too good an opportunity to pass up,” he says.

“It was in horrible shape,” he says. “Literally almost everything needed fixing, in my opinion. I would say in my professional career I’ve never been more stressed out, nor have I had more fun. It’s just fun to be able to lead the change and lead the turnaround, and fortunately we have great people.”

(Our meeting took place a little more than a week before Tandy announced that disappointing profits last December had caused it to violate a lender agreement, and that it was hiring a chief restructuring officer because, McGeachy said, “We believe outside capital is necessary in the near term to solidify our balance sheet.” So I didn’t get to ask him how fun, if at all, that part of the job was.) 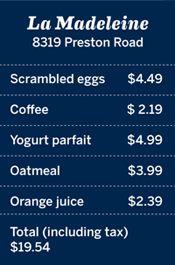 Tandy’s strategy the past four years has focused primarily on cost-cutting. The company has downsized from four distribution centers and an Arlington corporate office to just a single, consolidated distribution center/corporate headquarters in Oak Cliff. It has reduced annual expenses by between $15 million and $16 million, representing a more than 30 percent drop.

But how then to build the business back up after all the trimming? McGeachy has looked to strike deals with more powerful brands—Tandy obtains the exclusive license to manufacture and sell leather accessories under those names—that might help the company expand beyond its current retail presence in places like Wal-Mart. He prefers that route over attempting to build recognition for Tandy’s own limited portfolio of brands.

“It’s a faster, less expensive path to growth to license rather than build something basically from the ground up,” he says. The company has been successful in creating new partnerships with the likes of Eddie Bauer, Sperry, and American Tourister. Still, after I mention the company’s recent disappointing results, McGeachy acknowledges the turnaround has proven more difficult than he anticipated when he took the job.

“Turnarounds by definition are not easy, and today’s retail environment isn’t helping,” he says. “One of the things I’ve learned is it’s hard to be in a kind of cost-cutting mentality and growth mentality at the same time.”

So what then will signal success? When does he know he’ll have completed the job he was recruited to do?

“Lots of pressure working for shareholders,” I reply. “Ever wish you were a private company?”

“Transparency is overrated,” he says with a laugh.