Steakhouses can be a bit of a cliché: dark wood and leather-clad decor dripping in Cabernet-soaked machismo. Some places, such as Nick & Sam’s, pull it off with sexy swagger. Others lay the y-chromosone virility on a bit thick. (Hi, Bob’s.) But they all have the same thing in common: beef. Delicious, juicy, beef.

But not so much at the revamped Place at Perry’s. You may remember it as the restaurant formerly known as Perry’s. Owners Bill and Heather Esping had to change the name of their 13-year-old restaurant when the similarly named Houston-based Perry’s Steakhouse came to town in 2009. The Espings also vacated their cozy, traditional digs at the corner of Routh and Cedar Springs late last year for a more spacious and upscale space at  the Gables Villa Rosa development two blocks away.

It’s a radical change. Gone are the traditional steakhouse trappings. In their place, sky-high ceilings and a light-strewn, red and ivory interior greet guests in the new Perry’s. It’s all a bit cavernous. Even though the service is as warm and inviting as always, I miss the intimacy of the original space. Likewise, the lunch menu is light on traditional beef entrées yet heavy on everything else.

An expertly cooked and well-seasoned, five-ounce Niman Ranch filet was the lone steakhouse mainstay. Served with satiny, butter-soaked whipped potatoes, it was a lovely cut of beef and a deal as part of Perry’s “Lunch Done Right” menu: your choice of entrée, soup or salad, and non-alcoholic beverage for only $20, tax and gratuity included. Other highlights from the bargain lunch menu included the Magnum salad (mixed greens tossed with diced hearts of palm, radishes, cucumbers, and candied pecans dressed in housemade champagne vinaigrette), blackened tuna medallions served over soba noodles, and one of the best chicken-fried steaks I’ve had in Dallas. This one was a thin, tender ribeye, coated in a peppery crust that held up well to the thick cream gravy. If you’re really hungry, “The Place” burger is topped with cheese sauce, smoked bacon, and roasted jalapenos. It’s a challenging gutbuster. 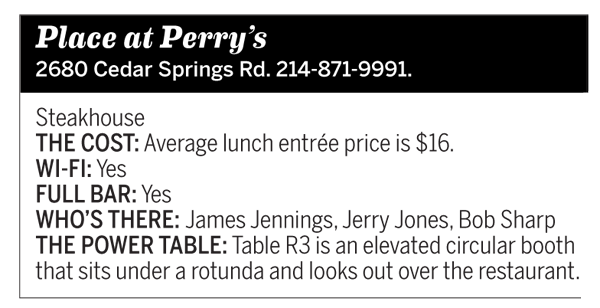 Some of Perry’s appetizers could double as light meals in themselves. The crab tower featured layer after layer of mango, diced tomatoes, chunky avocado, and lump meat crab salad. Fried chicken livers were a welcome find. Cornbread topped with jalapeno jelly made for a homey sidekick. I was surprised to see fried cheese on the menu, that party platter relic from the ’80s. But if you’re going to indulge, Perry’s was a delicous take: lightly breaded discs of gooey Oaxaca cheese from Dallas’ Mozzarella Co.

Happily, one of my favorite memories remains from the old Perry’s: the brown-bag-baked apple pie for two. It’s flaky, fragrant, and even a bit tart, thanks to some cranberries. It’s a sweet reminder that even though the new Place at Perry’s appears more modern, old-school warmth is still at its soul.