On Wednesday I wrote a piece here about District 2 School Board runoff election candidate Nancy Rodriguez and a bit of internet domain name tomfoolery that she seems to be in the middle of. Today on Facebook she countered with a claim that I deliberately ignored a denial. It wasn’t deliberate, but it was my fault. Meanwhile, she still does not have — still — a straight answer for the whole mess in the first place.

Rodriguez claims in her post that she provided me a direct and specific denial of the facts I reported in my piece and that I chose not to include her denial in my report. She and I had  been texting for the better part of a week. Mainly I had been texting her, and she had been not answering my questions or giving me weaselesque obfuscations.

In an earlier version of this post, I offered all of our texts. They are still below. Mine are in green. I think mine show how hard I was trying to get her to explain how her campaign website wound up trolling a domain name that had been intended for a school district program for disadvantaged kids. But in that earlier version of this post, I said she had not ever sent me the specific denial that she posted on her Facebook page today.

Oops. She did. After jacking me around for days and not responding to my texts with direct answers, she sent me her denial in an email, which I missed. That’s totally on me, and I apologize to Ms. Rodriguez for saying she had not sent it.

I guess she was responding to a text I had sent her telling her that Dr. Brian Lusk of DISD had confirmed that he had discussed the matter with her and she had agreed to convey the domain name back to the school district later this month. She said in her email:

“No, that is not true . I was not clear on what he was even talking about and, frankly, I was (and am) too busy with my campaign to look into it further. I told him I’d happy to talk to him about whatever he wanted to talk to talk about after the campaign. I cannot tell you on what date I acquired it because I never acquired it.” 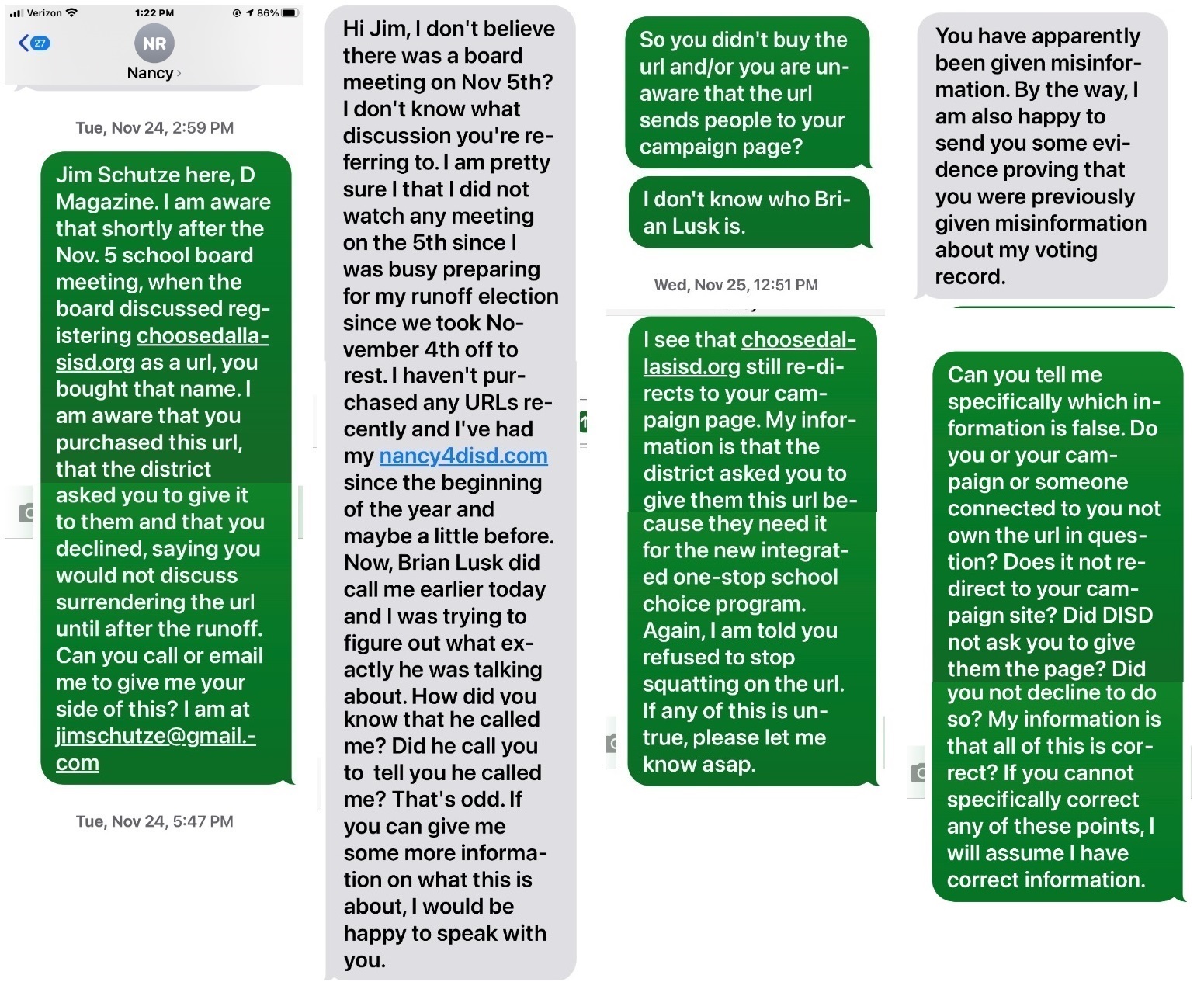 Ah, me. This is a lot to re-litigate.  It’s about Rodriguez somehow acquiring control over a domain name hours after the school board discussed getting it in a public meeting. The domain name was still available during the school board meeting, but the next day when school district staff tried to check it out, they found it had been purchased. In fact, the name now redirected people to Rodriguez’s campaign website.

Lusk, a school district executive, confirmed to me that he called Rodriguez about the domain name, and she agreed to give it back to the school district but not until later this month. The period when the district needs the name is right now.

That’s about all the re-litigation I can stand. Suffice it to say, this could have happened in a number of ways, not all malevolent. If you read my texts here, you may pick up a note of frustration after a while, but I was trying to give her every opportunity I could think of to explain it. To this day, she does not explain it, instead responds with what she very mistakenly must think are clever obfuscations. I asked her simple direct questions. I got weasel-words.

I wish I had not missed her email. But notice that she still has not done the simple and direct thing: she has never explained how or why her campaign began using this domain name, intended for a district-wide program aimed at racial equity, for its own narrow political advantage. And if her email is intended to call Lusk a liar, she needs to say that loud and clear, as well.

This was never going to be a Woodward and Bernstein exposé. It’s a domain name spat. I don’t think anybody’s headed for the calaboose. But why can’t this person just say specifically what happened and why? The common term, too clever by half, doesn’t seem to apply. Maybe too clever by a quarter.