An internal Dallas Police Department “preliminary after action report,” published today via the website Central Track, offers evidence that Dallas Police Chief U. Reneé Hall misled the City Council when she unequivocally denied during a June 5 special meeting that police fired tear gas at protesters who were trapped by law enforcement on the Margaret Hunt Hill bridge during a march on June 1.

The report, which is dated June 12, offers a detailed summary of the Dallas police’s response to—and perception of—the early days of the protests against police brutality that erupted in Dallas, as well as throughout the country, in the wake of the killing of George Floyd in Minneapolis.

It confirms what multiple media outlets reported during the first weekend of protests. As marchers took to the streets, the Dallas Police Department—operating in partnership with other local and state law enforcement—used tear gas, smoke canisters, “less-lethal” ammunition rounds, and pepper balls to control crowds. The report also states that DPD positioned snipers on buildings downtown to monitor demonstrations against police brutality.

Perhaps the most damning revelation contained in the report is the confirmation it offers that either Chief Hall lied about the use of tear gas on the Margaret Hunt Hill Bridge on June 1, she has lost control over her department and was misled or misinformed about what transpired, or both. The report contradicts her declaration to the City Council that tear gas was not used on protesters. That evening, as marchers found themselves pinned by law enforcement who blocked both ends of the bridge, SWAT commander Lt. Mark Vernon approved the use of tear gas and so-called “less-lethal” rounds of ammunition.

“SWAT Personnel immediately deployed two CS [short for the chemical name 2-chlorobenzylidene malononitrile] canisters onto the Westbound lanes between the line of protesters and officers in an attempt to create a barrier for the safety of the response team officers. These two canisters were ineffective as they rolled to the northern edge of the bridge and the wind carried the could off the bridge.”

Two additional canisters of tear gas, as well as a smoke canister, were then deployed on the eastbound lanes of the bridge. In his account for D Magazine about what followed, Tim Cato wrote, “I heard anguished screams around me from those with burning eyes. We heard officers tell us they would not use ‘more’ gas if we complied with them. We poured our baking-soda-and-water mixtures into swollen eyes to reduce the chemical effect that tear gas has when it binds with the human body’s TRPA1 and TRPV1 pain receptors, the same ones that make mustards and wasabi spicy. Tear gas has been measured to be more than 10,000 times stronger than those ingredients.”

Despite the department’s acknowledgment that tear gas was used on protesters, when questioned by Dallas Mayor Eric Johnson during the June 5 meeting, Chief Hall denied the fact. Johnson used the account in the D Magazine story for his line of questioning. (The mayor has not yet responded to a request for comment about the department’s report.)

“It was smoke,” Hall told the council. “We were not far from the bridge. There was no smell of tear gas. If tear gas had been deployed, individuals would not have been able to talk, stand up; it was smoke.” 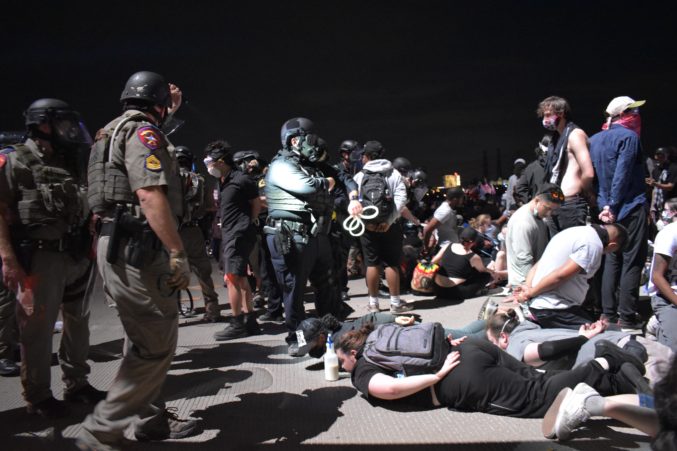 That contradiction is the most significant of a number of ways in which DPD’s report suggests chaotic leadership and internal communication problems during the first weekend of protests. An anonymous DPD source quoted by Central Track says the report suggests that DPD did not have a real crowd control plan in responding to the protests.

“Most of it sounds reasonable on its face but that’s because it is very general,” the source told Central Track. “They throw bricks; we have SWAT come and fire CS gas. That tells me that leadership didn’t know what they were doing [and] didn’t plan ahead at all. They brought in other agencies because of how bad Friday was and yes, they were needed, but we had never trained with them.”

Most of the details in the report flesh out what has already been widely reported in news outlets and on social media.

Throughout a chaotic weekend, the Dallas Police Department responded to real and perceived threats from protesters — including instances of thrown bricks and water bottles and at least one squad car being set on fire — by employing tear gas, firing “less-lethal” ammunition, making mass arrests, and posting snipers in buildings to monitor crowds. The department logged 5,670.75 hours responding to the protest, including 2,516 hours of overtime. During the four days reviewed in the report, police are estimated to have deployed tear gas, “flash balls,” smoke canisters, “tear balls,” and “sting balls” more than 660 times. However, the report says the department did not track every shot fired, and the total number is almost certainly higher.

The report also details a few specific incidents that lend insight into DPD’s bungled leadership during the protests. During an incident on Saturday May 30, Dallas Police Major Shead was monitoring a group of marchers on City Hall plaza from inside City Hall when he spotted a white male with a gas mask and a “long gun.” He called for backup to respond to the scene in order to “assist the man.”

“At that time, Major Shead feared for the man’s safety because the crowd had surrounded him,” the report states. “The crowd did not harm the protester and he freely left the location.”

However, according to the report, when Major Shead’s backup arrived, “Lt. Conley and his response team were surrounded by an angry contingent of protesters, resulting in Lt. Conley sustaining injuries and calling for SWAT’s assistance.”

DPD and Irving SWAT arrived and used tear gas to disperse the crowd. Although the report does not detail the nature of Lt. Conley’s alleged injuries, the account shows how, in the eyes of the police command, a white man with a gun represents less of a threat than a large group of protesters who did not appear to be provoked until the additional police arrived on the scene.

Another section in the report lays out the department’s account of the confusion that led to protesters being trapped on the Margaret Hunt Hill Bridge on the night of June 1. According to DPD, Sgt. Jeff Hall texted with organizer Dominique Alexander, the leader of Next Generation Action Network, before the march. Alexander told Sgt. Hall that the group planned to march in a circle along Riverfront Blvd. However, according to DPD, the marchers surprised them.

“After a few hours at the courthouse, the large group of protesters starting marching toward Riverfront Blvd. and then made U-turn on to Trinity Groves,” the report states, despite the fact there is no street in the area called “Trinity Groves”. “They marched North on Trinity Groves and neared the Margaret Hunt Hill Bridge. There were Dallas County Sheriffs Officers staged at the base of the bridge with their lights on. The crowd disobeyed the officers and began marching on the bridge.”

Despite the department’s acknowledgement that tear gas was used on protesters, when questioned by Dallas Mayor Eric Johnson during the June 5 meeting, Chief Hall denied the fact.

This account is confusing in part because of the reference to Trinity Groves, which is a development on the far western edge of the Margaret Hunt Hill Bridge and not a northbound road. It also contradicts Alexander’s own account of the evening, which said that marchers were boxed in by police who had closed down Riverfront, essentially directing the group onto the bridge.

During the June 5 council meeting, Chief Hall says officers told marchers not to enter the bridge. Media accounts, including in D, contradicted that, reporting that many protesters never heard such an order. And if DPD had closed down sections of Riverfront to allow marchers to make their U-turn, why wasn’t the entrance to the bridge blocked?

Regardless of whether protesters knew or did not know whether they were supposed to be on the bridge, the account demonstrates a massive communications failure on the part of DPD leadership. DPD arrested 600 protesters that night, but later dropped the charges.

Although it was first published today, this report began circulating among city officials more than a month ago. According to Central Track, this report was sent to Dallas City Council members on June 17, but they were told not to release the report publicly, citing a pending lawsuit filed against DPD by two protesters who were arrested on June 1.

Some council members also told the online outlet they had not read the report, since council is currently on its July summer break, and others who did read it said they did not believe it offered substantial new insight into the first weekend of protests.

In a joint statement, Chief Hall and Dallas City Manager T.C. Broadnax said the report was not released because it was a “draft,” and that the department has spent 500 hours reviewing new evidence since the report was completed on June 17.

This morning, the Dallas Police Department issued a press release outlining “new protocols and procedures in the management of future peaceful demonstrations.” In the future, the department will prohibit the use of tear gas, as well as “kinetic impact projectiles” to control crowds. However, in the release, Chief Hall also defends police officers’ rights to use chemical weapons and “less-lethal” ammunition in some circumstances. A federal judge granted a temporary restraining order to attorneys representing victims of “less lethal” munition that bars the department from using such crowd control methods until at least September 9.

“Chief Hall emphasized, however, that in the event of criminal acts such as burglary, vandalism, or violence against police and property including attacks on police officers, tear gas may be available with the approval of the Chief of Police or the Chief’s designees,” the release states.

What is troubling about that disclaimer is that the department’s own internal report reveals how police leadership often perceive peaceful protests as threatening, such as the demonstrators on the Margaret Hunt Hill Bridge, or take action that incites an escalation of tension, such as calling for backup on a rowdy crowd on City Hall Plaza. In other words, despite DPD’s new protocols, tear gas may still be used against Dallas residents at the discretion of a police chief who has lied about or has been misinformed about its use in the past.