Café Momentum was one of the many businesses damaged in the chaos of late Friday night as crowds moved through downtown, smashing windows and sometimes emptying storefront displays. It is ironic that this shattered window belongs to an organization that supports youth coming out of the juvenile detention system. They complete paid internships as servers and cooks in a program that includes mentorship and guidance for a cohort of predominantly young, black men and women.

“We had a window busted out, but nothing was looted, and they tried to overturn one of our planters,” says founder Chad Houser. “It’s—I don’t even know what the right word is, really: It’s eerie, scary, [it’s] due. My heart hurts for people who are this angry, because they have every right to be. I don’t condone vandalizing a place like Café Momentum, but I get it. Unfortunately, when you have the most powerful person in the world tweeting racial [epithets], he’s gaslighting people to be angrier, and as a result, people suffer.”

Conversations had already been going on among the staff and the interns based on principles of active listening. Set the property damage aside – what led up to this? Houser wasn’t downtown Friday night. He says he was at home, eyes glued to the many live feeds. The peaceful protest had turned violent; police engaged the protestors with tear gas and rubber bullets.

“As I saw things were beginning to get a little ugly, I was getting to be a little on edge and a lot of the concern was the lives of those that were protesting,” he says. “When I woke up on Saturday morning, I saw that things had taken a significant turn overnight.”

Having immediately rejoined the restaurant, he found the smashed window and overturned planter. “I worked with staff to get the window remedied. And then took out a long quote from Dr. King about riots and the significance of riots.” He texted it to the staff: I must say tonight that a riot is the language of the unheard. And what is it America has failed to hear? “Because I also think it’s important to condemn the root that has caused the action before we condemn the action,” he says.

Houser and staff psychologist Porshia Haymon hashed out a plan for how to unify the staff’s approach to the interns, “because they’re experiencing their own wealth of emotion through all of this,” says Houser. 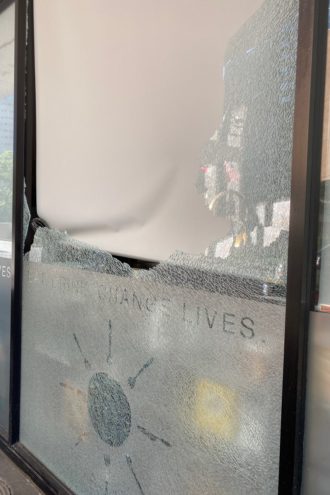 He sent another text. There was concern for a repeat on Saturday night. He told the kids he loved them, asked how they were doing, and asked whether there was anything the organization could do for support. He told them to be careful.

“If they feel compelled to be in fully volatile situations, I told them, ‘I will stand right next to you and walk alongside you and do what I need to do to help as well,’” Houser says.

Before the full team returns to the work they have been doing through Momentum E.A.T.S., a program that has been feeding DISD students lunches during the pandemic, Houser and Haydon will invite the interns to work with them to write a manifesto “regarding their thoughts and feelings,” as Houser puts it. That manifesto will be painted over the plywood that covers the shattered window. “So that their voices are heard and seen. Whatever statement I have, whatever thoughts I have are irrelevant; what matters most is the feelings and thoughts of the kids. Always, their voice should be the voice of our organization.”

In the immediate future, Café Momentum, which already has programming and training around racial equity and de-escalation, plans to incorporate weekly luncheons with community representatives that allows staff and interns to voice concerns and request action. According to Houser, work with partner UNT College of Law will be centered on knowing one’s rights.

Next week, nine students in the Café Momentum home school program will graduate with high school diplomas. A partnership with local community colleges offers free tuition. One student is already enrolled in the food service program at downtown’s El Centro.

“The events that have occurred in the past week are not new. They’re repetitive,” Houser says, looping back to the systemic nature of inequity and the aims of an organization whose very essence is about targeting its root. “Even with the pandemic sweeping into our community, that’s been one of our mantras all along, is that we have to be present for the kids at all times. Because it invokes a deep emotion.”

An earlier version of this story included the inaccurate phrase “at-risk youth plucked from the juvenile detention system.” “Plucked” failed to acknowledge the agency of the young men and women who choose to actively participate in the program, and “at-risk” was improperly used as an adjective without specific data to support it. We apologize for the sentence.