This season, the Dallas Mavericks decided to try something off the court. Twenty local artists got a chance to illustrate a home game through the team’s Posterized series. Clay Stinnett imagined a grizzly bear in Elvis garb fighting a horse and a cowboy. (Mavs vs. Grizzlies, Feb. 5.) Skyler Thiot drew a basketball hoop standing tall over the Dallas skyline. (Mavs vs. Kings, Feb. 12.) Mariell Guzman infused Dallas’ landmarks with bright colors, imagining an upside down Brooklyn in black and white. (Mavs vs. Nets, Jan. 2.)

“Most people don’t realize that Dallas actually has a burgeoning art scene. It really has since the ‘80s. But right now it started to get to much more of a fever pitch as more investments, more people move from the coast to the Dallas area for different reasons,” says Dale Alexander, the vice president of the Mavericks’ Creative Studio. “We knew that there was an opportunity there.”

The team prints 100 posters for each participating game and sells them for $20 a pop. The proceeds benefit the Mavs Foundation. It wouldn’t have been possible without Chris Paliotta, a local designer who served as the project’s point person.

“I actually only knew a small handful of artists first-hand from our list,” Paliotta says. “As for the others, I’ve been tracking their work over the years through social media. It was really important for us to incorporate and tap into several different types of visual art, from the street art world, to printmaking, to comic art—we wanted to capture it all.” 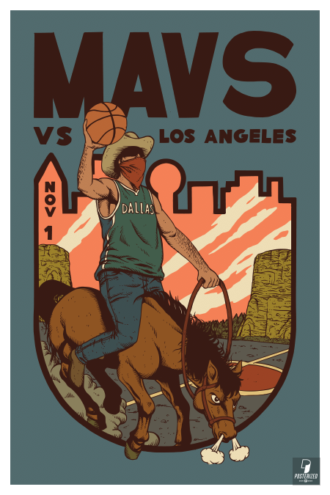 From left, posters by artists Arturo Torres and Mariell Guzman

Perhaps the most famous participant is Arturo Torres. The Dallas native is the illustrator of three New York Times bestselling books, working alongside author Shea Serrano. Others include Hance Taplin, creator of the clothing line By Way of Dallas; Will Rhoten, also known as DJ Sober; Vynsie Law, a designer and co-owner of We Are 1976; and Thiot, who’s made a name for himself among Mavs fans by reimagining the Mavericks’ jerseys.

“I think there kind of is a disconnect as far as people thinking art is cool versus people who think sports are just kind of like, ‘Oh, sportsball,’ that kind of thing, which is obnoxious,” Thiot says. “I think it’s cool kind of finding that intersection of art and sports and getting to take part in that.”

Alexander and Paliotta see the project as an extension of the Mavericks and the organization’s efforts to create a more community-driven approach to reaching fans who may only know the organization through basketball. Each rave about working with each of the artists and helping them develop ideas.

“I’m a sucker for the hidden details and ‘Easter eggs’ that went into each piece,” Paliotta says. “I love David Bartholow’s subtleties in incorporating classic 60s typography as a nod to San Francisco and Dallas’ rock ‘n roll histories; Jeremy Biggers’ meaning behind his dots and how they represent all 39 seasons; or Mariell Guzman’s upside down cityscape of Brooklyn. They’re all beautifully different, which is what makes the collaboration so special.” 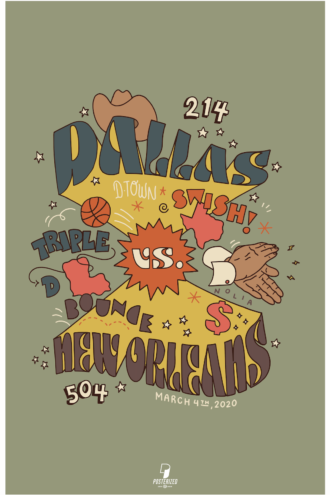 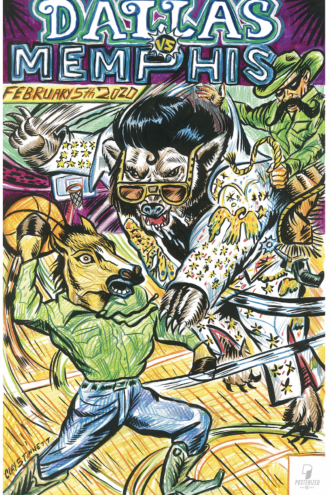 From left, posters by artists Will Rhoten and Clay Stinnett

The Mavericks have worked with local artists before. In creating this year’s City Edition jerseys, they turned to designer and graffiti artist Tex Moten. During the official launch of the new jerseys, the Mavs filled Victory Plaza with artwork and artists, some of whom are participating in the Posterized series.

Each design released so far is available to see on the Mavericks’ website. But fans can only buy them at the AAC. And when they sell out—and they do—they’re gone.

There’s a possibility that the Mavericks will bring Posterized back next year. With the organization gearing up to retire Dirk Nowitzki’s jersey, that could provide an added wrinkle for artists to work with.

“The sweet spot of programs like this, and other ones that we’re exploring, is where we live in a world where you don’t just have to be a fan of one thing because people have so many different interests,” Alexander says. “And that’s really what we’re trying to get at: where if basketball is not your No. 1 passion in life, that’s totally fine. If art is, now we have something to kind of make Mavericks basketball that much more applicable and cooler to you.”

Head here to see all the Posterized releases.

Want to Be a Mavs Dancer? Sign Up For These Classes