Few expected this to happen so quickly, for Errol Spence Jr. to arrive as a fighter, a champion, for him to arrive on such a big stage. The 29-year-old DeSoto native, undefeated with 21 knockouts, is days away from climbing into a ring in the center of AT&T Stadium in front of more than 50,000 fans. There, he will stare into the eyes of Oxnard, California’s Mikey Garcia, himself an undefeated four-time world champion, who took this fight to cement a legacy of his own. They’ll touch gloves. And then they’ll try to take each other’s heads off.

“I think I’m a passive-aggressive fighter,” Spence says. “I kind of mentally break down my opponents, and physically, so if you’re not 100 percent there, if you’re not willing to quote-unquote ‘die in there,’ then it’s going to reveal itself. That’s why my record is what it is—24 and 0 with 21 knockouts. A lot of opponents, you know, wilt under my pressure.”

Spence speaks like he fights. He’s precise. Direct. He chooses the right openings to share things about himself, and that’s only if you asked it the right way, left it open for him. He likes old gyms, but he doesn’t train at the R&R in Northwest Dallas anymore. He’d have kept it at that, but you press him a bit. “Derrick James World Class Boxing Facility,” he answers, smiling. Where is it? “It’s somewhere downtown. Nobody gives up the location. It’s the batcave.” James, Spence’s trainer, is sitting behind him, and he tells a riddle. “There is an island in downtown that I think you can build a casino on.” He smiles. That’s all we get.

This is the benefit of the fight being a short drive up Interstate 30. Spence stays home, works out in his gym with his people, gets to see his two daughters. (Except last week, when they were sick—can’t risk catching something before the fight.) He goes to interviews with an entourage of 12. He seems comfortable, if a bit light. He usually fights at 147. On Wednesday afternoon, he was 152 pounds. He says he’ll get closer to 160 by Saturday morning, a feat he spoke of with the same mild annoyance you or I may apply to an unplanned trip to the grocery store.

Garcia is his most formidable opponent yet, but that’s how they’ve all been. Spence traveled to the United Kingdom to fight Kell Brook on his own turf for the International Boxing Federation’s welterweight title. “The cooool cat with the oooozing confidence,” cooed the British announcer about Spence as the first bell rang. In the 11th, with his eyelid looking like the fold in a peach, Brook took a knee and bowed out. Next came LaMont Peterson. Boxing writer Joe DePaolo described that fight for us thusly: “Like all of his bouts, everything is at stake for him. A loss could derail his career.” A flurry of well-paced punches sent Peterson to the ground in the fifth. He got back up, but never really recovered. His trainers called it in the seventh. Carlos Ocampo, who Spence fought last year, didn’t make it out of the first round. 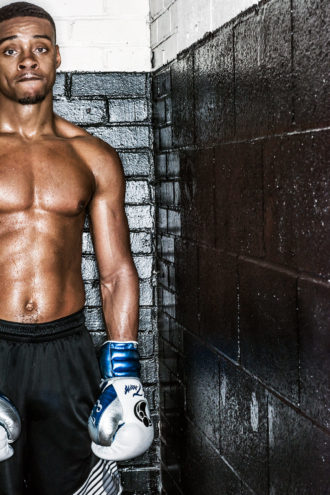 Garcia is 39-0 with 30 knockouts. He also had to work hard to get into Spence’s weight class. He weighed just 126 when he earned his first professional title. As ESPN noted, Garcia accepted this fight despite giving up a dozen pounds of muscle mass. Garcia enlisted Victor Conte, the sports scientist who served some time in prison for distributing steroids but has since redefined himself as a sports nutritionist and trainer for boxers looking to boost their preparation ahead of big fights. Garcia has never weighed above 139.5 and he’ll likely need to use speed to win. Spence is well aware of the narrative having shifted. Before, he was the guy who was taking risks.

“People say, ‘Mikey Garcia’s brave’ and this and that, and, you know, I don’t see it as brave. I see it as he has nothing to lose,” Spence says. “If I knock him out in the first round, they’re gonna say he’s too small. If I punish him, after the fight they’ll say he was too small but he had heart. If he does good and has a little of success, you know, they gonna say, he would’ve beat him if he was a little bigger. He’s getting his highest payday, so I feel like it’s a win-win for him all across the board.”

He’s putting himself in the corner, and he’ll have to fight his way out. Lennox Lewis, the star boxer whose own career influenced Spence to get in the ring, is confident he can.

“He’s a very accurate puncher, he’s determined, he’s unheralded, and he’s a young kid on his way to stardom, looking for that championship belt,” Lewis says. “What makes him great is he’s still humble, he’s still learning, and he’s got the eye of a tiger. He can go all the way.”

Lewis will be ringside, calling Spence’s first pay-per-view for Fox. Lewis was one of the fighters Spence used to watch with his dad back when he was 15; the two gravitated toward him because they shared a Jamaican heritage. He’ll now be the voice of Spence’s biggest fight, under the bright lights not far from his hometown, where it all began, but where it won’t end.