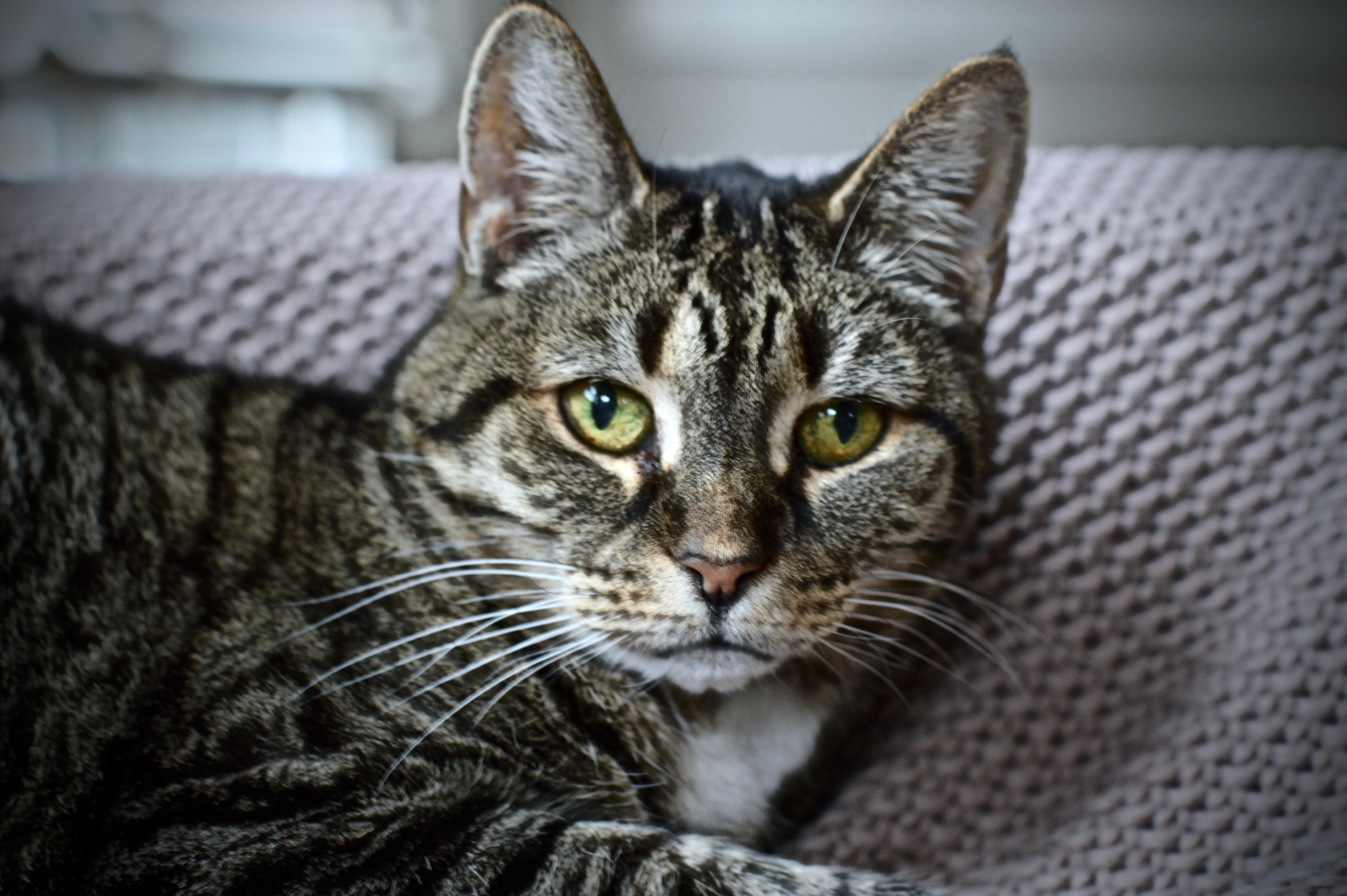 Maggie was always skeptical of portraits.

There’s been an unfortunate update to my July 2018 editor’s note.

Best I can count, I have had 27 cats. Only the first was intentional.

After quickly becoming overwhelmed by the abundance of options at the no-kill shelter in my college town, I sat down in the middle of the floor. A plump tortie waddled over and rested her front paws on my thigh. She proceeded to scream at every other cat that attempted to make an approach. I knew then that Pudge and I were meant to be together forever.

The second appeared under the back porch one morning as I was taking out the trash. She let out a plaintive cry, so I went inside and opened a can of tuna to try to coax her out with a forkful. She chomped down and ran back under the porch, the fork still in her mouth. That’s when I heard an even tinier cry and realized she had a kitten and probably hadn’t eaten since she’d given birth. We brought Mama Cat and Baby Cat inside, much to Pudge’s chagrin. Mama Cat died shortly thereafter from a heart murmur, but Baby Cat lived a long life, surviving years of insulin shots.
Farrah was a kitten that a homeless man had in his pocket. My secretary was walking by when he was arrested for loitering, and she told the cops that she knew someone who could take the little tabby: me.

Stray Cat, who instantly recognized the water bowl on the back stoop as the universal sign for a home for wayward cat mothers, also gave birth on our back porch. I came home to find her in the act, but quickly realized that she was toothless and couldn’t sever the umbilical cords, so the kittens were getting dangerously tangled. I had to cut them apart with scissors. Her babies—P!nk, P. Diddy, and J. Lo—were adopted by nuns in a local convent. Stray Cat went to live with a law school friend and spent her pregnancy (my friend’s) curled up on her ever-enlarging belly.

As far as I can tell, she lived to be around 23 years old. We had her for 20 of those years, for most of our relationship. She was the loner that tended to get the least attention when the other cats were around. She never liked being held or pet; I think it felt like too much of a restraint. But one night not long after we took her home, a friend’s boyfriend gave her a playful slap on the rump, and we learned that she preferred to be patted. Roughly.

When we threw parties in our Oak Cliff bungalow, she liked to hide in the bathroom behind the clawfoot tub and then jump out at whomever was sitting on the toilet, leading one guest to believe she was being attacked by a raccoon. And she was loud. Her claws constantly clicked across the hardwood floors, and she would scream out, generally around 3 a.m., sounding distinctly like a toddler calling, “Mooooooom!” The older she got, the more she talked. For a while I wondered if she were going deaf. But I think she just wanted to be part of the general conversation.

She was the healthiest of all our cats, with a soft coat that the vet techs would always comment on. But there was that year and a half when she repeatedly licked all the hair off of her belly, until it was pink and saggy, and we could never figure out why. By the end, it had all grown back and she looked almost exactly as we found her, except over the last few months, when she lost her appetite for solid food, and then the last couple of days, when she stopped eating entirely.

Before Monday, we had witnessed the deaths of seven of our cats over the years, some more painless than others. I assumed Maggie would be the easiest to say goodbye to, because she had lived the longest and could be a real asshat. But I was wrong.

You hope for a moment of peace and grace before it ends, but oftentimes that’s not the case. Sometimes the veins are too small, and the clippers are terrifyingly loud, and it all goes horribly wrong. And you wonder if you picked the right time, or if you were too late or too soon. And you wonder if you were a good enough friend and caretaker, or if you, too, were just an asshat who never understood what was being repeatedly asked of you.

The worst part was going home and realizing that, for the first time, there wasn’t another cat to hug and press my tear-soaked face against. There wasn’t a reason to fill the food bowl or empty the litterbox.