The City Council’s housing and economic development committee signed off today on proposed amendments that would make it significantly more feasible to create or rent these units—current law is loaded with difficult grey areas and expensive bureaucratic hoops to jump through. Any changes will need to go through the full council, but it’s still a bit of good housing news to come out of City Hall, kicking off a week that will hopefully include more on that front.

ADUs have the support of both fair housing advocacy groups like Opportunity Dallas and realtors’ organizations like MetroTex, as they should. Programs encouraging accessory dwelling units, in place already in cities like Austin and Minneapolis, could help lower-income families move into neighborhoods that would otherwise be off limits, an important step in ending the segregation responsible for so many of the city’s problems. That’s great for the renters previously kept out of such areas of opportunity. ADUs can also benefit homeowners. Imagine starting up a second income stream with that unused garage apartment. And for the new urbanism crowd, ADUs allow for what bcWorkshop describes as a “gentle” increase in neighborhood density, a natural, sustainable, and affordable single family housing option. Beats the “luxury” high-rise apartments going up elsewhere.

The proposed regulations, as of now, would require a homeowner to live on the property, and would limit ADUs to certain neighborhoods, although there was some discussion this morning of dispensing with the “accessory dwelling unit overlay” and allowing the new ADU policy to go city-wide. Either way, it’s encouraging to see the ADUs move forward, especially as the City Council gets ready to vote Wednesday on a comprehensive housing policy that, among many other things, encourages a smarter approach toward accessory dwelling units.

That policy rejects the mistakes of the past by having the city specifically target and invest in areas where it can make a difference. The reinvestment zones have drawn some pushback from southern Dallas council members disturbed by the policy’s disregard for Community Housing Development Organizations, or CHDOS, which have until now driven the city’s scattershot and unsuccessful approach to building fair and equitable housing by, in the words of Raquel Favela, the architect of the city’s new housing plan, “concentrating low-income families in low-income areas.” City Manager T.C. Broadnax has tried to assuage those council members by describing how the citywide initiatives in the policy will help those districts that don’t include designated reinvestment zones.

Those council members seem to be assuaging themselves, and the CHDOs, that aspects of the policy can still be changed. Which is true, for better or worse. The policy, if it’s approved Wednesday, will only work if the city sticks to it, and if it follows through on the “implementation plan” outlined to the City Council in a briefing last week. Many of the policy’s recommendations, including those on accessory dwelling units, require further ordinance changes to go into effect, leaving open the possibility that the city could very well sabotage its own housing policy even after adopting it.

On garage apartments, at least, the city appears intent on following through. 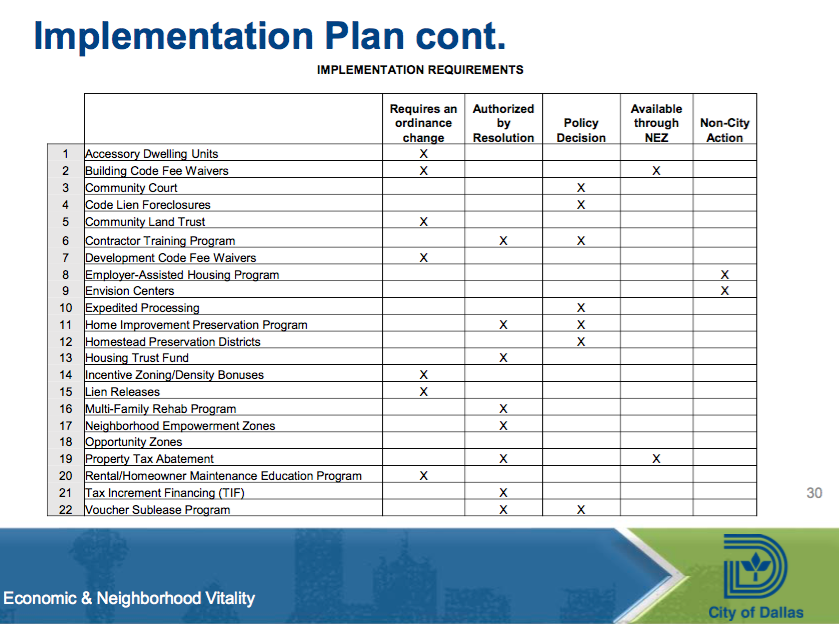