There’s a certain symmetry in our latest property tax assessments that will hit the mail today, on Friday the 13th. The nail biting, flop sweat, and sleepless nights waiting for the boom to be lowered … or not. But here’s the thing, regardless of what your bill is, it’s not enough. Even though Attom Data Solutions reports Texas has the fourth highest property tax rate in the country. Even though average property tax bills have risen over a third since the Great Recession. Even though the latest fiscal budget for Dallas through 2018 is $3.123 billion and slated to increase another $71.7 million in 2019.

I say we, as a city, are not collecting enough in property and sales taxes because we approve billions in bonds that largely pay for maintenance on stuff that already exists. Using bonds in this way is like taking out a loan not to build a home, but to paint it. Because of our municipal need to finance maintenance, we’re paying $267,322,998 this fiscal year in debt service (that’s interest).

Put another way, were Dallas to pay its bills on time, the most recent $1.05 billion bond could have been paid in cash in under four years instead of the decades of principal and interest required. According to the Texas Bond Review Board, the city of Dallas has a total of $4.1 billion in outstanding bonds for fiscal 2017 that will require an additional $2.388 billion in interest payments. That equals to a total indebtedness of $6.496 billion, or $2,500 for every man, woman, and child in Dallas County.

How can this be when Attom says we have the fourth highest tax rates in the country? Easy. High rates and lower property values generate less actual money. In Dallas, Attom reports the average 2017 residential property value was $274,127 and the average property tax was $6,117. Compare that with Hudson County, New Jersey, where the average home was valued at $472,055 with $9,211 in property taxes.

The other problem Texas has is that we’re a real estate non-disclosure state. Because Texas doesn’t require reporting of real estate sales prices, taxing bodies like DCAD don’t have a great/accurate picture of property values. Does anyone look at their property tax bill and think: ‘Yup, that’s almost exactly what I’d sell my house for!’ The only people who do are those who purchase a newly built home or who have lower-valued residences. DCAD is most accurate the lower a property is valued. Get into the wealthy areas like Preston Hollow and the hired tax fighters are on speed dial; they cry poor to DCAD while their property is listed for sale at double their assessed rate. This robs the state of revenue, forcing deficit bond spending just to fill potholes.

There needs to be someone at DCAD who scans Ebby.com each morning for new listings. Those listings should immediately have their assessed values raised to 80 percent of their asking price (allows a little fudging). After all, isn’t the owner’s opinion of the home’s value the only opinion DCAD needs? Their mantra should be, “If YOU think it’s worth X, who am I to argue?” It would be up to the buyer to show a purchase price that’s less than the new assessed value to get it lowered.

Yes, that would jump everyone’s taxes, but here’s the thing … in Texas you can only raise taxes by 10 percent a year, even though assessed values can increase unfettered. But when the home sells, the assessed value becomes the taxed value. The other wrinkle is that taxing districts are limited to an 8 percent overall gain in total revenue generated by property taxes per year (not including new construction). Couple both of these together and the state would be forced to reduce the taxation rate. Win-win for everyone (except those living in the most expensive homes and who coincidentally have the greatest ability to pay their fair share).

The other glaring problem in property taxation is in the commercial space where there isn’t even an MLS to aggregate for-sale properties and data in one place. Sales are private and hush-hush, and so the taxes paid by the commercial sector are witheringly small compared to the residential sector. Open those books and send appraisers to those buildings; the city’s coffers would reap the rewards.

And that’s what I don’t understand about city government. Revenue-generating entities should be properly staffed to maximize revenues. Construction permits should cost enough to, at the very least, self-fund the department, if not cough up a salary for city plan commissioners. After all, when a position is salary-free, you get what you pay for. As for DCAD, if hiring 50 appraisers to inventory and inspect commercial properties would generate more tax revenue than they’d cost, do it.

The reason we complain about property taxes is because Texas effectively has only two tax buckets. Sales tax is something we barely pay attention to. Like potholes, sales tax is just there. Property taxes are similarly there, but they’re a once-a-year lump sum versus the slow drip of sales tax. If Texas were to split payments in two, the drama would be lessened, like semiannual car insurance payments. Doubly true when you get a whopping bill in October just as you’re thinking about getting into the holiday spirit. 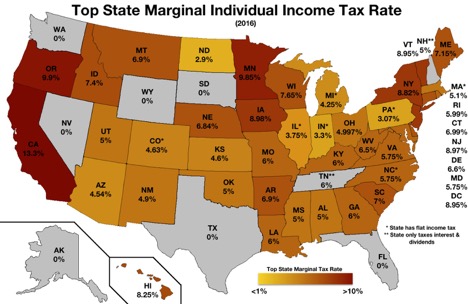 But Small in Comparison

Yes, an annual wallop is hard to take, but consider that Texas has no state income tax. Remember the New Jersey example above, showing how higher-valued properties pay more? Well, add in a further 8.97 percent in personal state income tax. Or how about the other two states that also had higher property tax rates? Illinois residents would pay a 3.75 percent income tax while Vermonters pay 8.95 percent.

In fact, as an overall tax burden, Texans pay less than 21 other states according to WalletHub. According to their 2017 numbers, the average Texas household pays $5,347 in state and local taxes. Compare that with New Jersey, where you’d be paying $11,237 in taxes.

Dallas would need to increase taxes in order to maintain city infrastructure and avoid bonds that largely finance maintenance. To do that, they could begin by taxing the property of those who pay too little (based on solid data). In many ways, this starts with supporting real estate disclosure of selling prices. Barring that, it means funding DCAD to allow them to sniff out the cheats, beginning with Dallas’ most expensive residential and commercial properties.

Oh, and before you start whining that our roads stink and calling DISD terrible and complaining that there aren’t enough cops on the streets, remember, they’re in that state because they’re poorly funded. Remember that the police and fire pension problem was a bomb whose fuse was lit because we paid so poorly that we had to “pay later” for work now. And that blew up in our faces long after the architects and politicians were gone.

Better streets, schools, and policing come down to budget.