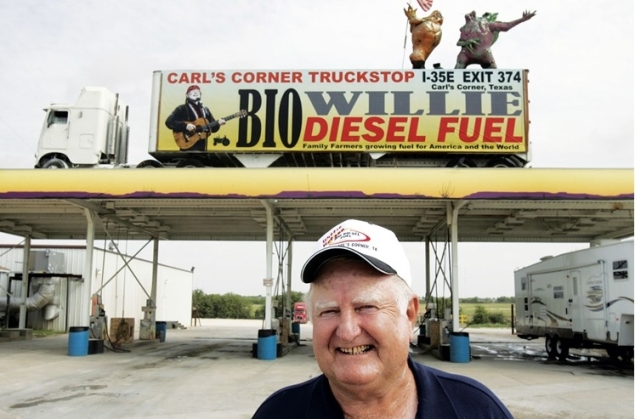 Carl Cornelius in the days when he was selling Willie Nelson’s biodiesel.
Photography by Rhiannon Lee

As I’m sure many of you know, the drive along Interstate 35 between Dallas and Austin isn’t particularly scenic. It suffers from a serious dearth of character, which is why many a motorist in now long-past days looked forward to passing the small town of Carl’s Corner, with its truck stop unmistakably adorned by 10-foot-tall frogs.

The man behind the truck stop and the town was Carl Cornelius, who was memorably profiled by Mike Shropshire in the November 2006 issue of D Magazine. It’s one of the 40 greatest stories we’ve ever published.

The occasion for Shopshire’s article was the soon-to-open Willie’s Place, a joint venture of Cornelius and his famous buddy, certified Texas treasure Willie Nelson. The original truck stop had burned in 1990, and the place had never recaptured its earlier mojo. The relaunch was centered on the production and promotion of biodiesel fuel, and the effort was promoted in the likes of the New York Times. Shropshire wrote at the time, “Now Carl Cornelius sits in a little white frame building, across I-35 from the site of the Willie’s Place empire that is poised to blossom and grow in that happy little town on the highway.”

Alas, it didn’t last. The truck stop was foreclosed upon and closed at the end of January 2011. It was sold and is now a plain-old Petro Truck Stop. The frogs migrated back from whence they came, along Lower Greenville in Dallas; Cornelius was on hand for their installation at a Taco Cabana in June.

I called and spoke with the man himself late last week. He still lives in the town he founded. He’s still the mayor. The 2010 census counted 173 residents of Carl’s Corner, but Cornelius says it’s more like 210 now. He spoke about all the development springing up between his place and Hillsboro (less than 10 miles away): new truck stops, a gas station, and a Long John Silver’s. He’s hatching his own plan to bring a “antique village mini-mall” to his town.

“It’s going to boom, I know that. This whole area down here is ready to blossom. My problem is I don’t want to sell,” he said.

I asked him just how disappointed he’d been by the failure of Willie’s Place. Though he acknowledged it was a blow, he also put an upbeat spin on the result.

“Listen, I’m happy. I don’t have to work there 24 hours a day, like I did back then,” he said. And why didn’t the concept work? “Really and truthfully, if I told you everything, it would hurt some people’s feelings, and I don’t want to hurt their feelings.” However, he did then allude to the fact that “Willie’s in the singing business,” not the truck stop business.

Cornelius hasn’t spoken to Nelson in a while, though he noted that these days he doesn’t answer the phone for any call from a number that he doesn’t know, and that since Willie’s got an unlisted number it could be that he’s called him but he didn’t pick up. He and former Dallas Mavericks coach Don Nelson did recently talk about going to Willie’s home to play poker, as they sometimes do, but nothing’s come of it yet.

In the meanwhile, Cornelius assured me that I’m welcome to visit anytime.

“You ought to come down, and we’ll kill the fatted calf. I’ve got a guest house you can stay in.”

I’m definitely keeping it in mind for the next time I’m headed that way.