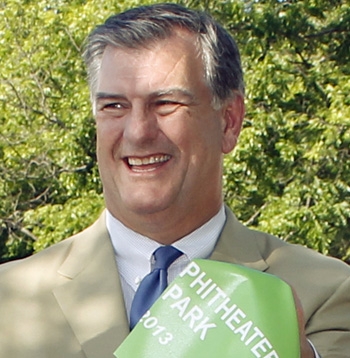 Dallas Mayor Mike Rawlings doesn’t seem impressed by that solution proposed today to settle the spat between Museum Tower and the Nasher Sculpture Center. Buttonholed at an event in South Dallas, the mayor said he was already familiar with the condo tower’s proposed “oculi” fix. “It was something I had seen before,” said Rawlings, who helped previously to seek a mediated solution to the flap, to no avail. “It will be a good solution when the Nasher says it will work. Obviously I want a two-way dialogue on this, a 100 percent solution.” That solution will be one that satisfies the Nasher, he added—and helps “sell out” the units at Museum Tower, too.