Noah Hutton Blazing His Own Trail

It wouldn’t have been that surprising if Noah Hutton had chosen to pursue acting, which after all is the family business. With 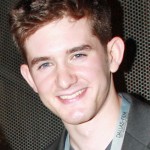 the late Jim (TV’s Ellery Queen) Hutton as a grandfather and movie stars Timothy Hutton and Debra Winger as parents, the acting gene is sort of in Noah’s blood. But the soft-spoken, super-connected 23-year-old has opted instead to direct films, partly because of Winger, who famously appeared with John Travolta in Urban Cowboy. “She talked me out of being an actor,” Noah said in Dallas Sunday.

He was standing against the wall at a charity party at Post-Op Studios following the local premiere of a new documentary called More to Live For, which he directed and scored, at the Dallas International Film Festival. Winger probably didn’t have to do much talking to dissuade her son from the acting trade, you figure. Hutton (pictured in photo by Jeanne Prejean) said that since he’s something of a science nerd–he majored in neuroscience at Wesleyan College–he’s naturally more comfortable behind the camera, explaining and piecing things together, than in front of it.

Hutton’s second substantial documentary, More to Live For follows three cancer victims searching for the bone-marrow transplants that could save their lives. The three are Dallas entertainment-insurance executive James Chippendale; Nigerian athlete Seun Adebiyi; and multiple-Grammy-Award-winning saxophone player Michael Brecker, who eventually died. Brecker’s widow, Susan Brecker, and Chippendale co-produced the film, which is intended to raise awareness about the importance of bone-marrow donation.

Susan Brecker said that, early on, Chippendale had in mind a director for the movie, but that she recommended Hutton, a family friend, for the job. “He was a sweet genius,” Hutton said at the Post-Op party of Susan’s late husband, who played sax with everyone from Chet Baker to Mick Jagger. “I helped him during the last year of his life, when he couldn’t even bend down to plug in a cord. I made sure he could get stuff done.”

Hutton, who said he “grew up on film sets” and didn’t go to a regular school until the fourth grade, made a decent-sized splash with his first big documentary, which was called Crude Independence. Executive-produced by Jonathan Demme, the 2009 film showed how the lives of the people in a small town called Stanley, N.D., were changed after a major oil discovery there.

These days, working as creative director of a New York production house called Couple 3 Films, Hutton’s involved in subject matter a little closer to his “science-nerd” heart. Besides the cancer flick–which will screen again Friday at 7 p.m. at Highland Park Village Theatre–he’s producing 30 original short films, each six to eight minutes long, about psychology and neuroscience for Scientific American. He’s also embarked on a 10-year-long documentary about something called The Blue Brain Project. For that one he’ll be traveling each year to Switzerland, where neuroscientists are trying to simulate an entire human brain on IBM supercomputers.

Next, Hutton said, he hopes to try his hand at writing and directing a narrative screenplay. If and when he does, we know where he might find a good male and female lead for it.