Eddie Bernice Johnson Supporters: To Err Is Human, We Continue to Trust Her 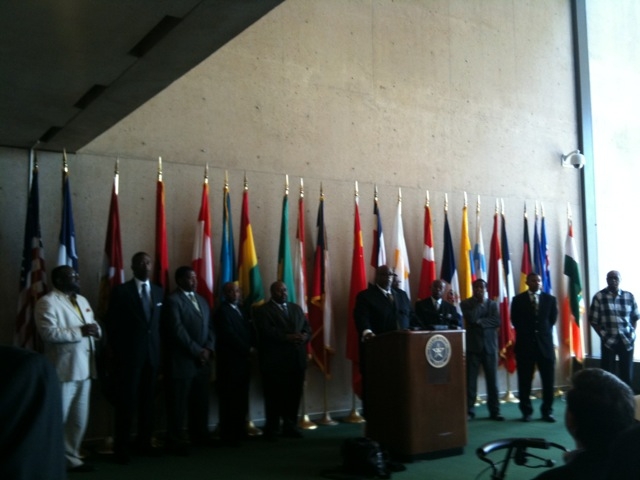 I stumbled upon an impromptu press conference, guess that’s what you’d call it, on behalf of Eddie Bernice Johnson by some supporters in the ante-room behind City Council chambers this morning. Arranged kind of quickly, I hear, perhaps to soak up the press and crowds who had turned out for Mayor Leppert’sÂ  call for property tax-hike opponents.Â  In any case, supporters of Pastor Stephen Broden were there also, some praying openly, some telling me the EBJ people did not want them to be there, but they got in a loud sound bite about jobs you will hear on tonight’s news.

EBJ’s supporters? Mostly pastors, including L. Charles Stovall, an ordained elder and associate pastor of social justice and community empowerment at St. Luke “Community” United Methodist Church. Mr. Stovall got a two-fer as he was passing out a letter in chambers addressed to the city council, protesting the automated calling system

“that has been created to call certain numbers in Dallas which says that the city council wants to raise your taxes and simply asks respondents to press a number if they want their taxes raised. This approach is misleading and deceptive.”

And in contradiction to public hearings, he said.

A few folks stepped up to the mike. Among them, Edna Pemberton, former city councilman Craig Holcomb, Willie Mae Coleman, and Dr. H.A. Tillmann Hein, an anesthesiologist with Metropolitan Anesthesia Consultants.Â  (I literally stumbled into this deal, so apologize if names are not spelled correctly.) Carlos Medrano’s name was called, but he did not come forward. Basically, her supporters all said Dallas was a better place because of EBJ’s leadership, and they shared all the help EBJ has given them throughout the years, each saying in so many words she made a mistake, she paid restitution, I forgive her,Â  it’s over, now let’s move on.

Afterwards, I sidled over to Dr. Hein, who sang her praises for helping de-link anesthesia payments from Medicare rates under a public plan. (That would have kept anesthesiologist’s reimbursement rates at low low Medicare rates, putting them out of business, he said.) I asked how he felt about the health care legislation that she supported.Â  Well, he told me, EBJ, who is a nurse, was incredibly responsive to the doctors’ dilemma. While parts of Obamacare are very bad, he said, some parts are good. He is hoping we can tinker with the plan to remove as much of the bad elements as possible.

It ended with a prayer.Â  I asked if we could ask questions, but was told, no questions.

Of course not, muttered a Broden supporter.Â