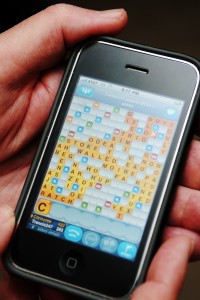 To the left there is the final board of the final match of the D Magazine Words With Friends Tournament. Chris Cree defeated Trennis Jones by a score of 423 to 283 to take the title.

My favorite moment of the evening came after all the action was over and the crowd had thinned out. A small group continued to gather around Cree and his wife Carla (who, I’m told, was intensely watching the video streams we had projected on screens as both the semifinals and finals were played). Â A group of Newtoy Inc. employees peppered Cree to get his thoughts about Words With Friends. He said it was an intriguing variation of the game that he knows so well. Bingos, worth fewer points than they are in Scrabble, aren’t as important. And the different point values and configuration of the bonus squares are “a real equalizer,” he said, meaning that coming up with those seven- or eight-letter words isn’t as important. Â I love hearing an expert –an expert in nearly any field– expound upon his area of expertise. The excitement and joy in his eyes as he recounts key points in a particular match is infectious.

I asked Cree for some final thoughts about the contest. Here’s what he had to say, followed by the final boards from each of our two semifinals.

Carla and I truly enjoyed the experience. What better way to spend an anniversary! We capped off the evening with a celebratory chicken fried steak and onion rings at D Magazine’s #1 choice – Ozona’s.

As far as game notes – Against Rich I pretty well drew the bag. I was able to bingo twice with the blanks – AEERRR? – REARERs and AENOPR? – PERsONA. I had four other “non-goes” in that game (bingos that did not play). TIDINGS, DENGUES, CINEAST/ACETINS and HIGHEST.

Against Trennis (anagrams into INTERNS and TINNERS) I did not have any bingos and do not think I was close to any. The board was tight and scoring opportunities were few. When Trennis was playing a lot of S’s early on, notably SHEENS, I wanted to take out the remaining S hook onto MOIRE with EAU on top of the R and E. EAU can only be pluralized with an X. I was pretty much playing as defensively as possible while trying to score at the same time. Tough to do in speed play. I kept waiting for the hammer to drop, but, fortunately for me, Trennis did not get that bingo he was looking for.

Best to all and I hope all of the players will consider trying club and/or tournament SCRABBLE – David Higbee is coming over Sunday for some games. There are two clubs in the Metroplex, we have two annual events, about 8 one day events each year and for the next two years will be hosting the National Scrabble Championship in August at the Intercontinental Hotel in Addison. 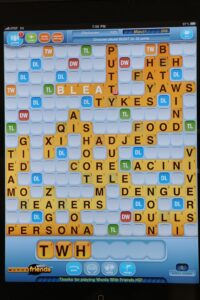 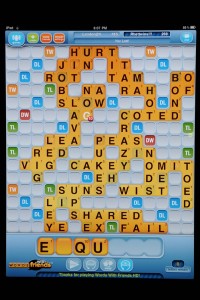