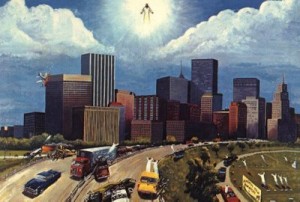 In July, 2008, we posted this painting and asked if anyone inÂ the vast FrontBurner Nation knew anything about it. I guessed that it was painted circa 1975. Since then, I have received inquiries from all over the world asking for more information, which IÂ didn’t have. Â Until today.

Via email, Wayne Vaughn — who must read his FrontBurner in one-year segments — has caught up on the conversation and shares a valuable piece of intelligence:

I happened to know the artist.Â  When I was in high school attending Bryan Adams in 1979 I dated Dalena Anderson, her father was Charles Anderson, a great Christian and artist.Â  It is right I believe he told me he painted it around 1972 or 73.Â  It was his interpretation of what would happen in Dallas if the Rapture happened. Where he is or even if he is still alive I couldn’t tell. He lived close to Northwest Highway on Charring Cross Rd, but that was in the 80’s.Â  I only write this because I was looking for a copy of the picture; the real copy was something to see. The feeble pic doesn’t do it justice. I also write because of most of the idjits don’t know what they were talking about in the comments. But it was true in was in the Circle Grill. But I had seen it in some churches too.Â  Just thought I give you and update, though you probably don’t care.

Whadya mean, I probably don’t care, Wayne? I do care. This painting is a modern religious folk-art classic. If anyone knows or knew Charles Anderson, please step forward. The next mystery to solve is where the original painting now is.

Dallas’ most important news stories of the week, delivered to your inbox each Sunday.
Charles Anderson Artist Dallas Rapture
Advertisement