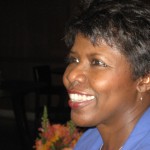 Washington newswoman Gwen Ifill, delivering the Sammons Media Ethics Lecture last night for SMU’s Meadows School, said she isn’t crazy about the increasingly blurry lines between journalism and advocacy or entertainment. Rachel Maddow, Michael Moore and Glenn Beck don’t do journalism per se, she contended–though there’s plenty of room for their acts in the national conversation. At the same time, Ifill (pictured) said she welcomed her own 15 minutes of fame in the entertainment realm when Queen Latifah played her in a Saturday Night Live skit spoofing last year’s vice-presidential debate, which Ifill moderated. “I loved it,” the newswoman said. “A big movie star and singer and actress wants to play you. Cool!” Ifill said she’d met Latifah earlier and urged her to do the spoof, to which the entertainer replied, “Sure. Get me some material.” Added Ifill: “After McCain picked Sarah Palin, I knew I was in like Flynn!”