A concha is a small thing. The bready Mexican pastry covered with a crunchy cookie topping is a ubiquitous morning staple so common you might overlook it in places like neighborhood panaderias or Fiesta Mart. But not for Chanel Wilkins.

The Plano cottage baker sells bake boxes filled with treats one weekend each month and fills special orders under her baking business Cakelamb. “I am only one person in a little, itty-bitty apartment kitchen,” she reminds bread fans, who know to follow her on Instagram. And yet she’s making vanilla, chocolate, and strawberry swirled, cookie-topped conchas. And you realize, in an effect, it’s Neapolitan.

Wilkins grew up eating conchas in heavily Latino Anaheim, California, where her abuelo would wake her on weekends and say, “Let’s go to the market.”

Always, she was scoping out the bakery case with the conchas. “They were so mesmerizing to me,” she says. “I remember thinking, What is this architecture? How do they get this design on top? … They were so beautiful to me.”

The tops are her canvas. Sometimes they depict roses (as in, she mingles globs of pink and green and white into coronas). Other times there flowers of violet, yellow, and green bloom over the palm-size domes. Some are dressed up like a strawberry.

She makes birthday conchitas: a cheerful explosion of rainbow sprinkles. A Boston cream pie concha sends yellow vanilla pudding sploodging out of a dome of drippy chocolate icing. Chantilly conchas layer berries and apricot jam and so on into a split and filled mound dainty as a cake. 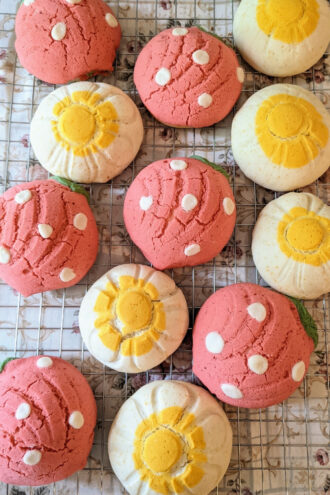 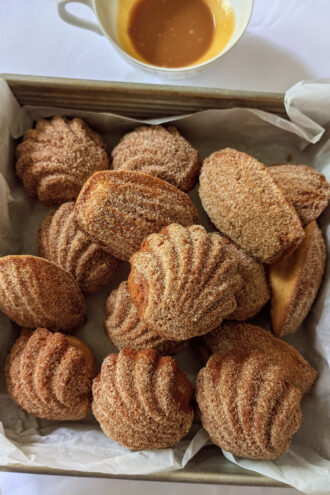 Also, she makes madeleines, dipped in white chocolate—cookies and cream ones that look quite black tie. And what she calls “cottage cakes,” which are rotund, puckish cakes, which she tops with icing and crumbles of, say, salty graham crumbles.

Last week was her first week baking full-time after stepping down to part-time in her library assistant position for the Plano Public Library system, and it’s the conchas that most have her heart. (They come in flavors of strawberry, lemon, Neapolitan, Mazapan, birthday, and “marble moo” with a cow print, as well as cookies and cream and churro.)

And when she moved to Frisco in late high school and didn’t find them with such ease, she dove in as an adult and worked hard to get “that nostalgic taste I was used to having as a kid.”

“I want you to take a bite and for it to take you to a happy moment in your childhood.”

“I think they represented a lot that I didn’t really [grasp],” she says of the significance they had in her childhood and still do now. “They represented Mexico to me. But I wasn’t born in Mexico. I did not grow up in Mexico, although I have family in Mexico. But I felt this connection, like This comes from a home that I’m not super familiar with, but I have it here in front of me, and I can experience it here. When I think of conchas, I think of this other home that I have. I knew that there was this significance to it that I didn’t maybe fully understand.”

Croissants and doughnuts have been innovated countless ways, but people don’t always think of conchas as a place where one can innovate and compose ornate, delicate design work—a staple, but not one that necessarily need be explored. And yet Wilkins picked up that canvas.

“I think conchas are definitely underestimated, and they have been for a long time,” she says. “There’s so much more to conchas than people understand. There’s so many more elaborate ways to dress them up.”

Early in the pandemic, she saw people doing inspiring things in YouTube videos (all in Mexico). She realized she could do the same. “Let’s make a whole themed concha. How could we do a s’mores concha, put some marshmallow in there? How could we put all kinds of nostalgic elements in there that will take you back to your childhood in one bite?” she wondered.

How to Claim Your Conchas

Follow Chanel Wilkins’ Cakelamb on Instagram for bake box details (Wilkins is currently working on pumpkin conchas for the September box). Pick up in Plano.

She hand-mixes all her doughs, does everything by hand.

In her cakes, too, and in her madeleines (the shell thing is funny: “I have an affinity for shell-shaped treats,” she laughs), what holds them all together is nostalgia, a slightly romantic bent.

“I want you to take a bite and for it to take you to a happy moment in your childhood,” she says. “It’s almost universal.”

Black cocoa, malt powder, and milk powders create impressions with that powerful tug. Grinding down Oreos into a fine powder or making an Oreo cream filling from scratch in a dark cocoa cake; concocting a crumble based on a Ritz cracker; or crafting a malted milk chocolate chip yellow cake all appeal to her desire to soothe with the reconfigured familiar.

“What was a favorite childhood snack?” she asks herself. “How can I take elements of that and put into a concha or a cake? Break it down.” It becomes a fun challenge for her. 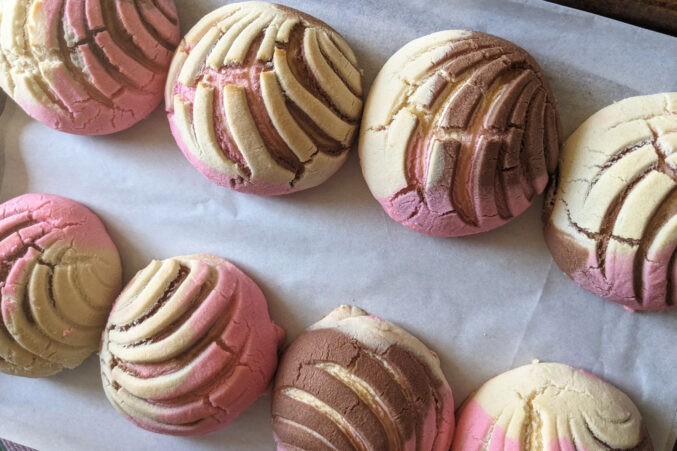 Now, Wilkins is making sometimes 10 dozen conchas a day in her apartment. This is her mission to raise up the beautiful underdogs.