Jasmine Coleman still remembers when she and her family didn’t consistently have something to eat. She grew up in Dallas, Balch Springs too, but mainly in South Dallas around Fair Park in the lower-income areas, she says. “Growing up I’ve already always seen the effects of not having enough food or being on food stamps—dealing with food insecurity.” Even in college the UT Arlington alumnus struggled. “Food has always been at the center of my life in that way,” says Coleman.

When the pandemic hit last year, Coleman saw the exacerbated impact of COVID and financial hardship, which left residents straining to pay bills, rent, and feed their families. The hardest hit communities were in the southeast parts of Dallas in some of Coleman’s old stomping grounds, where Black and hispanic populations were getting disproportionately hit with high rates of COVID. So Coleman founded The People’s Fridge, a growing network of community fridges from which people can pull fresh fruits and vegetables, snacks, milk, and grocery goods from a refrigerator.

“It was just really on my heart to go ahead and start one,” she says after finding that Dallas didn’t already have free fridges (the closest is the Funky Fridge in Fort Worth). “Why wait for someone when you see the need and nobody’s fulfilling it?” Last September, Coleman did just that. She put up the first People’s Fridge in South Oak Cliff at the Pan-African Connection Bookstore and Resource Center. Shortly thereafter they had two more refrigerator locations within three months, one at the Owenwood Farm and Neighbor Space in East Dallas and a third in Desoto at HeyyHealer Studio.

Coleman says they have two more in the works. Gibson Grocery, a Black-owned store in West Dallas, will host The People’s Fridge fourth location beginning in May, and there’s potential for another fridge in the Bonton area. 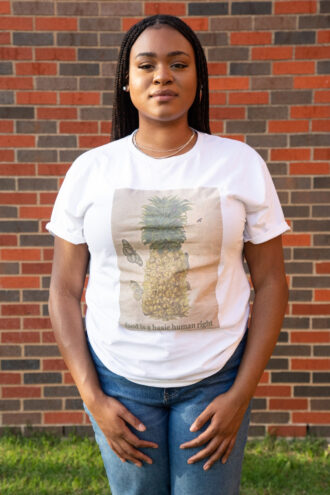 The fridges are restocked a couple of times per week to the tune of $1,000 or by direct food donation from businesses and individuals alike. It’s entirely free—both free of charge and free of stigma, no one has to prove their need or provide their identity if they wish to stay anonymous. It’s this approach that sets The People’s Fridge and other like community fridge networks everywhere apart from nonprofit food banks.

Whereas charities often operate from a top-down, one-way street of helping those in need, says Coleman, they aren’t “necessarily addressing a symptom of bigger issues.” With mutual aid groups, she adds, “we understand that there’s political and other systems in place that keep all of us in some way, shape, or form oppressed.” It’s about taking responsibility for others in your community and working to change the conditions that put them in a position of need in the first place.

“I do think in the long term, the biggest thing to get is empowerment.”

“When we think about solidarity, when we think about mutual aid, it really is just being there for someone else in the same that you would in a personal relationship,” says Coleman. While community fridges may not be able to feed entire communities, they’re one way to meet urgent needs. Coleman also wants to push for actual grocery stores in these areas that lack access to affordable nutritious food.

When HEB announced its North Texas arrival, many felt like it “was a slap in the face” that the store wasn’t opening in South Dallas. Coleman says a community-owned co-op approach might be a better fit if bigger institutions find certain areas of Dallas “undesirable” or won’t be successful. “I do think in the long term, the biggest thing to get is empowerment,” she says, “like, ‘I live here and I have a say in what goes on here.”

It goes back to the mutual aid framework: people not only want to give someone something to eat, but try to change the circumstances in which they need help. Put another way, “More Solidarity, Less Saviors.” This phrase is emblazoned on t-shirts Coleman designed and launched on Earth Day to help raise funds for The People’s Fridge. On the back is a definition of mutual aid, plus where to find the first three fridge locations. (You can preorder the shirts, $35 each, here.)

Coleman is in it for the long haul, dreaming up ways to expand (the group’s already doubled their volunteer base from 45 to 90 in less than a year)—not only adding more fridge locations but through education. “I can provide this emergency service, but if I don’t give you the tools you need to empower yourself—how you want to eat, how you want to play a part in the distribution of foods—then I haven’t really done anything for you long-term.”