On Monday of this week, Jenna and Matt Bresnan of Bresnan Bread began selling their pastries at all local Royal Blue Grocery locations. (We will pause for a brief, celebratory “Whoop!”) Now, you could find Matt’s orange-cardamom morning buns nestled beside the vanilla cream Danish with Cara Cara orange and pistachio.

The business began as a homespun effort—the passion project of a veteran of the culinary industry—and expanded rapidly from there. You could pick up their baked goods from farmers markets (Local Yocal and Saint Michael’s). The Bresnans also had a weekly drop-off presence at Carbone’s until they teamed up in late 2019 with Milk and Patience yogurt makers Brent and Stephanie Gilewicz to use the locale where they make gallons of dairy goodness in the Design District.

In that very space in the Design District, Matt pulls soft pillows of dough from banneton baskets in the middle of the night and slowly eases them into cast iron skillets.

Bearded, Matt wears a faded denim chambray shirt over tattoos with a ball cap, a pencil over one ear. He is visionary, a maniac of sourdough and laminated pastry. By the end of the night, he will have 200 round loaves of bread, scores of viennoiseries, all for Saturday morning’s pick-up. Then he will go to bed.

Those lumps of dough that will bake to crackling completion in lidded cast iron skillets represent one of a number of hand-mixed doughs: country sour, golden raisin-fennel seed, potato rosemary made with roasted Yukon Gold potatoes and roasted garlic, cacao-cherry, multigrain with seeds, lemon zest and thyme in a loaf studded with olive and dark-toasted walnut.

They get a three-day life-cycle, with an overnight cold proof that tamps down the lactic acid formation for something not as sour, a little sweeter, and almost floral from complex fermentation. They come out of the oven with blisters and bubbles on their domed tops from steam. They have almost-burnt crusts. A slice allows you to admire the architecture of the naturally leavened bread, the burnished parts that almost flirt with bitter notes and the sweeter, creamy, near-custardy crumb that’s chewy and springy.

Matt fell in love with the Tartine bakery cookbook in 2016. “I loved the images. The dark color. That,” he said of those exceedingly rustic loaves, “I want to do that.” Several artisan bread classes later, he was tinkering; from his training, he was making his own formulas that leaned heavily into whole grains (even the basic country sour is 20 percent whole grain from Barton Springs Mill). 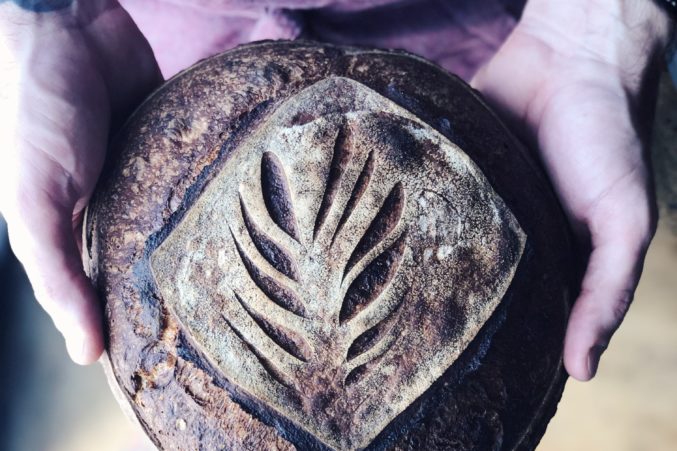 With viennoiserie, the stuff of much-folded butter, his goal would be to achieve the complicated results without yeast—a lofty goal. But he’s ambitious. Already he’s developed formulas that incorporate sourdough starter and poolish (the hydrated sourdough sponge), which give them a depth of flavor that’s unachievable otherwise. Pastries thus boast a smidge of sourdough starter tang and whole grain that give unrivaled flavor to every meticulous fold and tuck.

Tawny flecks betray the presence of whole grain and toasted wheat germ in the ham and Swiss croissants he covers with an egg wash as they sit on sheet trays. Almond croissants are heavy (in a good way) with frangipane cream. Each pastry—kouign amann, croissant, Danish, morning bun—has its own dough. No mix and matching. Danishes become a canvas for seasonal fruit.

Almost all highlight the exquisite lamination (that folding process) he still does by hand. And the kouign amann, he says, “that’s the pinnacle.” (You know: The flaky layers, curled like the petals of a flower, are almost dizzying.)

Matt knows he leans classic. “I’m definitely a purist. I want the intricacies of the craft to show.”

He’s only been baking full-time since January. Before that, he was also head of catering for Food Company, his overnights with dough and butter were brutal. Diving into an ardent focus on sourdough and laminated dough was his way of simplifying.

Where does he go from here? Does the couple find a larger place in McKinney where they live? They’d have more space for the sheeter he bought in November for croissants, and deck ovens would allow him to get away from the lidded skillets. These are all future aspirations. Now, he’s happy to measure days in flour-dusted baskets, success in a shower of crumbs.