Las Palmas isn’t crowded. It’s mid-week and not yet an hour into dinner service. There’s no frenzy of trays topped with frothy mugs of frozen margaritas winding through the dining room. The air is clear and void of steam coiling off cast iron skillets piled with sizzling meats.

Florescent beer signs, which hang near the entrance, cast a rosy glow in the dining room—a slightly cooler shade than the exterior’s salmon-hued stucco.

A couple at the bar leans over a plate of crispy tacos. A few parties sit in oxblood vinyl booths. A server wearing a green apron over a white button down heads toward the patio with a bucket of ice containing two bottles of Moët. (Yes, champagne. At a Tex-Mex restaurant.) 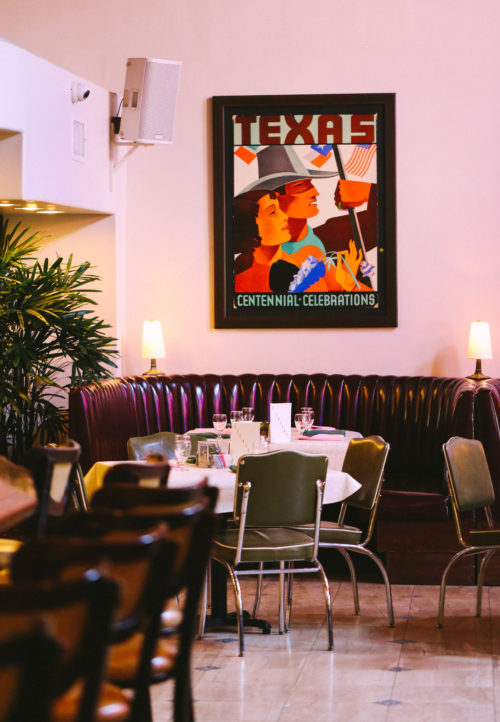 The 8,700-square-foot restaurant in Uptown, which opened in May, feels retro. It’s like stepping into a scene from Miami Vice. And this is what owners Pasha and Sina Heidari set out to accomplish. The bulky, white QSC speakers  mounted to the wall are deliberately kitschy, blasting Harry Belafonte and Men at Work. As is the newly-installed carpet in a dining nook near the kitchen. The beige travertine floors—which are a relic of sorts, leftover from Stephan Pyles’ Baby Routh—were discovered when the owners dug up the wood floor. It was Social House then. And before that, Arcodoro & Pomodoro. And before that, in the ‘80s, Baby Routh.

“Why a Tex-Mex restaurant? I don’t know,” says Pasha. “We grew up in Dallas, my brother and I, and we’ve always loved Tex-Mex. I don’t have a simple answer.” He recalls family nights spent at Uncle Julio’s over mounds of tortillas smothered in glistening yellow cheese.

“I designed the menu at Las Palmas to be respectful of traditional Tex-Mex recipes but with upgraded ingredients,” says Galvan. “For instance, our fajitas are made using Rosewood Ranches’ Wagyu beef and our pork is from a small farm outside of Austin.”

I’m seated in the dining room with a friend. It’s getting busier. A large party, complete with toddlers, is escorted to a separate dining room. A table of 20-somethings in matching athletic t-shirts take a banquette. A server slides a red and green salsa across the 80s-inspired oilcloth table cloth. One is a bright and acidic blend of roasted tomato, garlic, peppers, and a touch of vinegar. The other is tangy and made from roasted tomatillo. He then places a bowl of chips down between us. A pile of slightly warm, golden tortillas sits on a black-and-white checkered basket liner. We drape our napkins in our laps. Mine’s a shade of forest green, which matches the server’s apron. His is bubble gum pink. The same colors can be found throughout the restaurant and on the retro-chic menu. The attention to aesthetic details here is thoughtful—a calculated and borderline ironic nod to an era since passed.

The drink menu isn’t one you’d expect from a Tex-Mex restaurant. Gregory Huston, previously at Bowen House, is the bar manager. The cocktail list ranges from hibiscus and black pepper-infused vodka to a seasonal Pimm’s Cup. The B.A.N.A.N.A.S. blends bourbon, cinnamon, banana liqueur, lemon, and a flamed banana peel. It’s perfect. (Disclaimer: I really, really enjoy banana flavored things.) The margaritas are equivalent to other top-shelf options in Dallas.

“It was very important from the whole inception of this, that if we did Tex-Mex, that there was some fantasy element to it,” says Pasha. “And it’s easier for me to provide a different experience for someone via cocktails.” 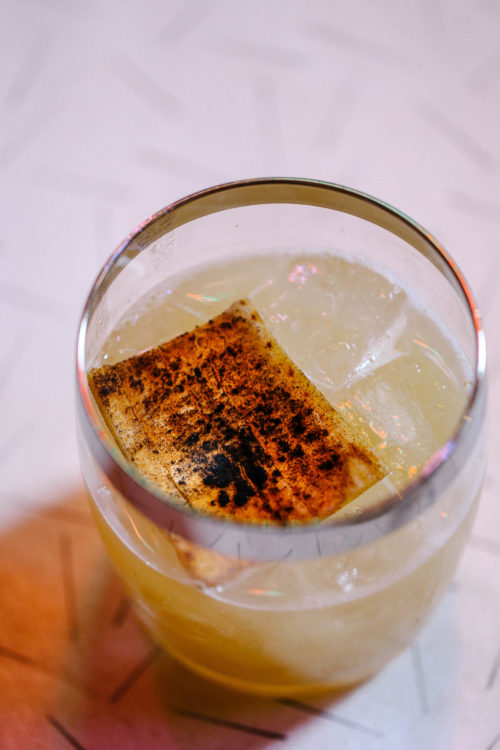 The B.A.N.A.N.A.S. Photo by Catherine Downes.

That element of fantasy is found throughout Las Palmas. From the intentionally kitschy ambiance to the dessert cocktails, which include a Brandy Alexander and Pink Squirrel milkshake (a nod to the 1950s cocktail made with Creme de Noyaux, Creme de Cacao, and cream). Ours came with ice cream, and was topped with whipped cream and served in a fountain shoppe glass with two straws. Even when submerged in the surroundings here, it’s evident that this is a playful manifestation of a nostalgic idea. A representation of what Tex-Mex means to the Heidari brothers. For the imaginative, it’s fun. But is it authentic? What is authentic Tex-Mex, anyway?

While for some, the word Tex-Mex is used as a pejorative (Walsh explains that this is particularly the case for people who reside on the East and West Coasts), for many Texans, it’s still the quintessential comfort cuisine. Something that evokes memories of elementary school trays piled with cheese enchiladas. And this is the case for the Heidari brothers. But is tampering with tradition by way of complex cocktails and Wagyu beef fajitas a sacrilegious offense to the real-deal?

He explains that when David Garrido of Jeffery’s in Austin was serving crispy fried-oyster nachos in the mid-’90s, some diners were hesitant. But ultimately, “It sold fine, and people liked it.”

“There’s nothing wrong with elevating Tex-Mex,” he says. “But as soon as you do, people will say ‘that’s not Tex-Mex.'” But they’ll likely still eat it.

He also explains that regardless of the direction that restaurants take—be it a modern spin on chilé con queso or a cocktail made with hibiscus—that Tex-Mex’s impact on food is forever. “There were no chips and salsa before Tex-Mex,” he says. “The influence is never going to disappear. Doritos, Pace salsa, Frito Bean Dip, that’s not going anywhere, that’s a multi-billion dollar industry.”

Dinner service never sped up to a pace comparable to a place like Mia’s or Herrera’s. And while the cocktails here are flawless and a crispy beef taco is as to-the-point and satisfying as a crispy beef taco gets, some of the other dishes need work. I won’t get into the specifics, because our dining critic Eve Hill-Agnus has a full review on the way.

What I will say, is that I appreciate the restaurant’s attempt at preserving an era since passed. Although, like Walsh says, some people may consider Tex-Mex to be their grandparents’ food, the Heidari brothers do a decent job at incorporating modern touches to the cuisine. The outcome is fun and a bit tongue-in-cheek.

So, is this the future of Tex-Mex? If anybody out there has a time machine, please feel free to chime in. Otherwise, we’ll just have to wait and see.