The group behind the $1 billion Collin Creek Mall redevelopment broke ground today on another former retail site with plans to bring nearly 1,000 single and multifamily residences to North Richland Hills.

It will sit on a 52-acre plot of land situated within the South Loop of I-820, which also houses the North Richland Hills City Hall building. The plot is the former home of the North Hills Mall, which closed in October 2004, and has sat empty ever since. It was torn down in 2007. 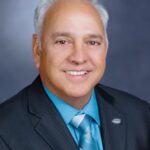 “The problem was that it was an old mall site, and so the land price was pretty high. And all the utilities and the infrastructure were in bad disrepair,” says North Richland Hills Mayor Oscar Trevino.

After the City of North Richland Hills began moving its City Hall to the plot in 2013, they realized its potential as a development site. They started the search for a developer several years ago and eventually chose Centurion American.

“To get Centurion American, with the background they have, and the financial wherewithal to help support the city, it really was a really good thing for us,” says Trevino.

Centurion American was just as eager to help North Richland Hills build on the site. 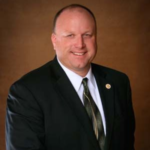 “Mehrdad Moayedi, our President and CEO of Centurion American, grew up in that area, and felt like he was a perfect fit for it,” says Chief Operating Officer Sean Terry. “It has that family feel when you exit off a major road, and you pull in there, and they have a round–about that leads to the front of their City Hall. It really feels like you’re in a little community.”

Though the groundbreaking ceremony occurred on Wednesday, the full development isn’t expected to be completed until 2027 at the latest.

“We feel like the five to seven-year timeframe is what we’re comfortable with so that we can have the whole project built-out 100 percent,” says Terry.

The project will be completed in one big phase, despite its many elements.

“It’s made us rethink a bit,” says Terry. “When we build the hotel, how does that look? If it has a restaurant component, we want to make sure we have a curbside appeal if we have to do this again.” 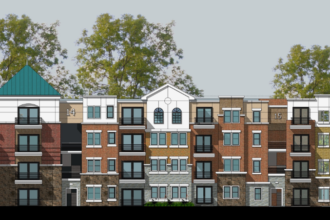 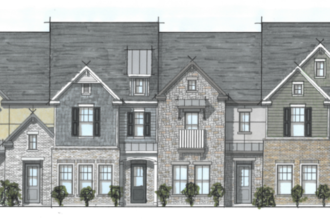 A global pandemic that’s created a work-from-anywhere foundation combined with an influx of people moving from California and New York and low housing prices and interest rates have sparked the suburban homebuilding business—and caused a shortage in inventory, Terry says. The location, he adds, just makes sense. “You’re 15 to 20 minutes from the airport and 15 to 20 minutes from downtown Dallas.”

The development is also expected to be an economic boost for the city.

“You’ve got another 2,100 to 2,300 people living here that are going to be shopping locally,” says Terry. “Right now, any sales tax you get or any property tax you get helps keep your city going.”

Though the North Richland Hills City Council has been involved with the development from the get-go, they have passed the torch on to Centurion American.

“Our role in it is minor, other than getting it off the ground,” says Trevino.

Centurion American has paired with builders for the residences. New Synergy will build City Point’s 46 one to two-story bungalows and 122 two to three-story urban homes, while CB Jeni will build the 198 townhomes. The NRP Group will build all of the multifamily residences.

Outside of North Richland Hills, Centurion American is currently working on the redevelopment of the 40-year-old Collin Creek Mall in Plano. They will begin demolishing the old J.C. Penney and Sears stores to make room for a new hotel in November and hope to have all of the financial elements of the development approved by the city in December. The development company is also working on a 2,000-plus home master-planned community in Little Elm, as well as a 325-acre community in Anna.