The Dallas-based platform, made for the LatinX community, has partnered with Voto Latino.
By Kelsey Vanderschoot | September 9, 2020|3:00 pm
Advertisement

“The goal was to create this app for the Latino community—a place where they can connect and meet with other people in the community, other people who share their either immigrant or cultural experiences,” said Julia Estacolchic, head of marketing for Chispa.

At the time, other apps were targeting the Latino community, but none were geared entirely and specifically toward it. Chispa hoped to fill that market void. 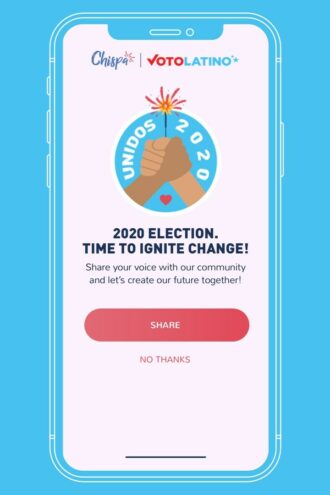 “We know that there’s a lot of cultural traditions, and customs, and values that are shared in the community and that continue to be important regardless of whether you were born in the U.S. or you were born outside of the U.S. in Latin America,” Estacolchic said. “We know there are certain things when it comes to romantic relationships when it comes to family acceptance, and so on, that never change—even if you were raised in the U.S., We wanted to offer that out to the community.”

The app allows users to self-identify their roots and display them on their profile in the form of a flag(s), something that Estacolchic says will enable them to maintain their individual identity while still being part of the broader LatinX community. Users can also choose to use the app in English, Spanish, or both.

Since its launch three years ago, Chispa has grown to become the No. 1 dating app for LatinXs, with more than 3 million downloads.  Between March and July of this year, the app experienced a 20 percent growth in installations, Estacolchic said, and its reach extends to both metropolitan and rural areas. California, Texas, and Florida are among its top user markets.

Now, Chispa is hoping a recent partnership with Voto Latino will help facilitate potential matches even further by allowing users to indicate which issues they feel passionate about before this year’s election.

“We don’t have conversation starters or icebreakers,” Estacolchic said. “Where we go in, and we build something specific is when we feel that there is something that the community really wants to talk about.”

The new feature launched this past Friday, and Estacolchic hopes that potential matches will use this displayed information to start a conversation—whether an assuring affirmation of shared values or a healthy discourse surrounding disagreements. Better yet, increase and mobilize the LatinX voter base, she says.

“This is a really key moment for the [LatinX] community and the responsibilities of all of our companies to mobilize them and give them the tools, as much as we can and to the best of our ability to, to put them out there, mobilize them, and to ignite action.”

Mayor Eric Johnson wants an investigation of the company running the city's largest public testing site.
By Will Maddox
Books

Take THAT, you troublesome words! Julia totally pwned you!
By Tim Rogers
Healthcare

She has set up a fund for employees who need to seek abortions outside the state.
By Tim Rogers
D Magazine Directories