Coworking company WorkSuites is opening another Dallas location at 4131 North Central Expressway–the largest yet for the companies Dallas-Forth Worth portfolio.

“It is no secret that Uptown has been hot forever, and Central Expressway from about Mockingbird Lane to Walnut Hill has been hot for a very long time as well,” says WorkSuites Founder and CEO Flip Howard. “We have multiple locations in both submarkets that have been top performers for us for well over a decade, but we are really excited about what is happening along the Central Expressway corridor between downtown and SMU.”

The tower stands just north of the Knox/Henderson area. Howard said the location and combination of amenities and walkability are why they decided to make it their largest Dallas location. 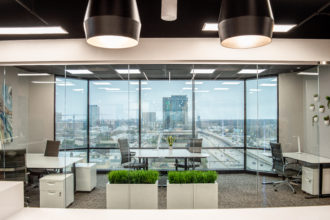 The new location will occupy two full floors encompassing more than 140 offices over roughly 30,000 square feet in the office tower.

Some highlights of the building, Howard said, are “downtown views; executive suites; a board room; multiple conference rooms and team rooms; a variety of coworking spaces; a full-service coffee lounge; cafe; a fitness center, as well as the latest IT infrastructure.”

A grand opening will take place from 4 to 7 p.m. March 4 at the office.

UT Dallas is paying students to get vaccinated. Pandemic unemployment benefits to end next month.
By Will Maddox
Football