Bruce Wood Dance Company moved into its season this year and quietly, through Vimeo and other modes, began streaming what they could. They put up archival footage of past performances and a stunning set of dances filmed during their summer at renowned dance festival Jacob’s Pillow.

Then, in masks that glowed neon in the velvety night, they performed an outdoor, distanced dance with Capoeira-like movements, whirling around each other under the starry night.

As the pandemic intensified, they longed to return to work.

Now, like other dance companies across the country and world, they realized there was a need for the next iteration: a foray into the world of dance on film.

Focusing on Dallas talent, they enlisted the videographers The Digibees (Pockett Brown and Jirard), the creative duo that has produced the company’s teasers and archival footage. This time they turned to something more ambitious, beyond the scope of what they’ve attempted together before, blending film and dance in something intimate and unprecedented.

The film, titled Hope, features a cast of choreographers and creatives that runs the gamut from coast to coast, including five new works and one restaged Bruce Wood number. It also meant they were able to bring back their photographer, who shot from a distance. Their costume designer designed for pieces that were often rehearsed through Zoom.

They shot for the better part of the month, braving the elements outdoors. They shot on location, navigating inhospitable terrain, such as grassy meadows—lumpy, bumpy, wet, and sodden, traps for dancers—that appear as idyllic pleasure-scapes. Navigating, too, the choreography and how to find moments of intimacy while keeping the dancers safe.

Always the overarching question hovered: “What does it mean to continue to create art during the pandemic?”

In these 30 minutes, we have drone shots and tender close-ups, perspectives and cinematic approaches we’ve never seen on these dancers. The result is a set of six works, each with its own lighting, mood, and cinematic style.

These are, we never forget, films. They are dance. They are both—in a way Bruce Wood has never attempted. They reveal the dancers as we’ve never glimpsed them before. And with an intimacy maybe more achievable, even, than on stage.

This first foray, both exciting and terrifying, speaks to the company’s agility and perseverance in creating work in this time. It brings relief and satisfaction to those of us with a keen desire to see moving and provocative work.

“We never made dance films before. The editing process has been much more time-intensive than we anticipated,” executive director Gayle Halperin said as the deadline approached. “So—we will make it.” They did. 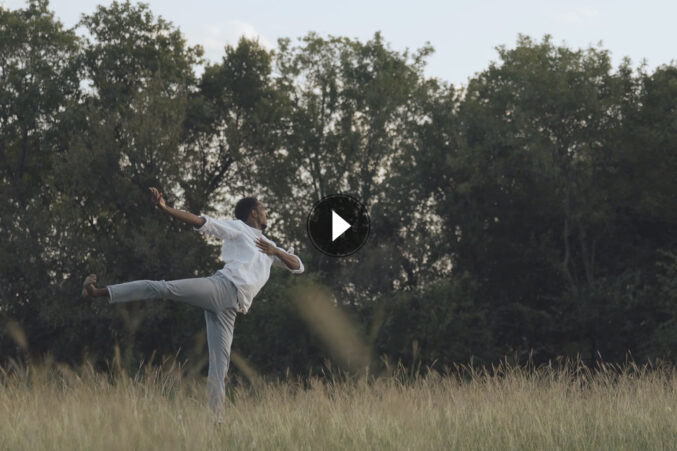 Watch this trailer and then watch the show, which screens tonight through Monday. It’s the Bruce Wood dancers as you’ve never seen them before.

Promise Me You’ll Sing My Song

Promise Me You’ll Sing My Song was the first film captured on location, and the setting figures weightily. Fort Worth choreographer Adam McKinney’s heavily researched body of work promotes Black voices. He takes stories of injustice and tells them honestly to connect the audience to the human side of these atrocities. This piece focuses on the story of the murder of Reuben Johnson, a Black man who was lynched near Mountain Creek Lake, southwest of Dallas, in 1874. The specific lynching site is unknown, save for the fact that it happened near that lake.

McKinney could have focused on the lynching of Allen Brooks on the corner of Main and Akard streets downtown in 1910, but he chose to unearth a story both “under-told and confounding,” whose mystery, in part, intrigues him—a potent, gaping lacuna around which to build a visual vocabulary. He let the space speak to him, which produces an intimacy with the location.

McKinney instructed dancer Matthew Roberts not to dance as Reuben Johnson, but as himself. And so the dance represents all of their stories. Singer-songwriter Najeeb Sabour, too, said he let it be his story; he composed the lyrics that give the piece its devastatingly beautiful title. The cello, his instrument, is the closest to the human voice in range and register (“2021 will be the year of the cello,” he predicts), and there is an ache in knowing that. 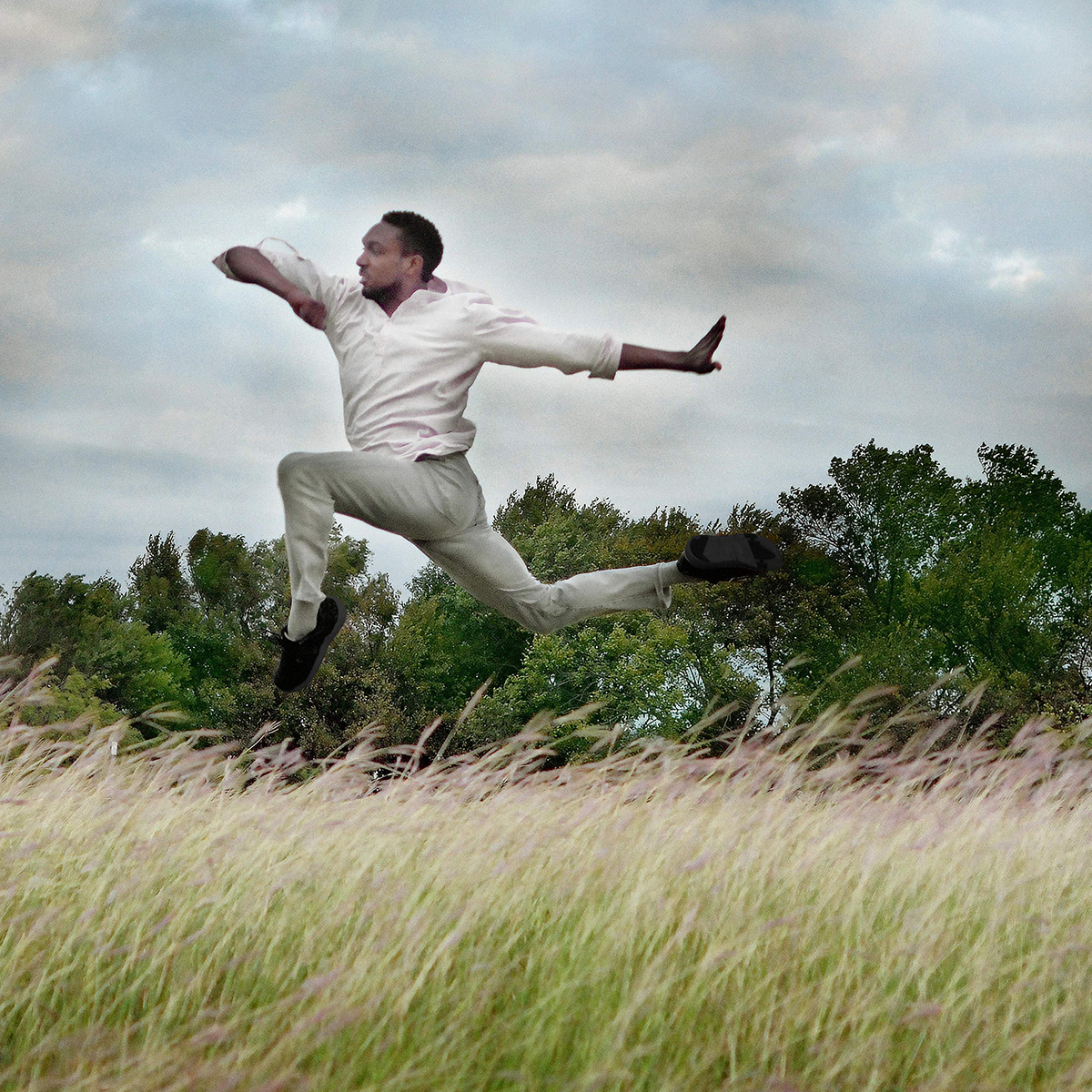 Promise Me You’ll Sing My Song
Brian Guilliaux
Brian Guilliaux
Perhaps more than any other, this work underscores the powerful intimacy of film: the effect of being in a tree with Roberts (or Johnson), of seeing him from a bird’s eye view in the drone view that ends the piece, pulling us back and back.

McKinney danced with Alvin Ailey, but this is his first time choreographing work with an all-Black creative cadre. It will, in that sense, mark his personal and professional timeline. Just as the piece marks ours, its history linked to the present moment.

McKinney’s work, embedded in the study of semiotics and symbolism, probes notions and possibilities of healing and what lies on the other side of trauma. Dance, he believes is a natural form and medium through which healing can occur, and perhaps, he suggests, the answer to the question, “What lies on the other side of trauma?” is “each other,” such that dance might be a choreography of healing or what he calls the aesthetics of liberation. We see this in the choreographic language—a simple caress—and its filmic quality.

Sabour allowed time for “the spirit of Reuben to sing through me,” he says, developing a haunting melody that also leaves space for the dance and the interpretation of the viewer. The lyrics tell a story, complex and heroic, stripped down to, and crystallized in, four lines that end with, “And if the trumpets come to take me home/Will you promise me you’ll sing my song?” They leave us with a profound charge. As Sabour says, “It takes a certain level of humility for a dancer to sing. It’s more of a challenge.” And, like the dancer, “We’ve got to pull from something deep to make that happen.”

McKinney, a professor of dance at TCU, is co-founder of dnaworks.org, dedicated to antiracism and healing. 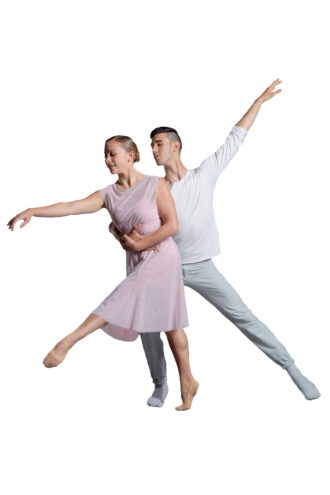 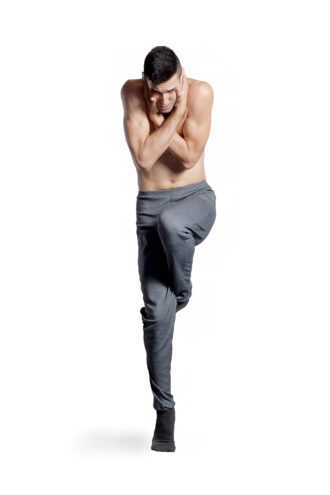 Life Interrupted connects us to something wrenchingly current that we are moving through together. It tells the story of two of the company’s patrons’ experiences of COVID-19, the reality of being in intensive care for 21 days, on a ventilator, intubated for 12 days, and close to death. The couple commissioned the work, which allows Bruce Wood company to plunge us into the loneliness.

“Some of the descriptions they gave us of his mental and emotional state during hospitalization due to COVID were so extreme, the imagery,” says Bollinger. As they discussed lighting and angles, “We wanted both the camera to be moving with him, so it feels tumultuous (you feel like you’re falling over as he’s falling over), and at other times, the camera is stable.” Viewing him in a pool of light, the viewer wonders, “‘Where’s up, where’s down, where’s the wall? Is he in nowhere land?’ You’re viewing him as so isolated and alone; you’re both feeling it with him and seeing him in it. We played with that a lot.”

The film uses space as a character. The piece is shot in a wide-angle ratio that places a lot of negative space around the dancers (which includes a masterful solo by Seth York). The camera is like a dancer. The effects recreate the impression of the crushing isolation and disorientation—a life interrupted—while an original piano composition by Joseph Thalken conjures hope, peace, and serenity. 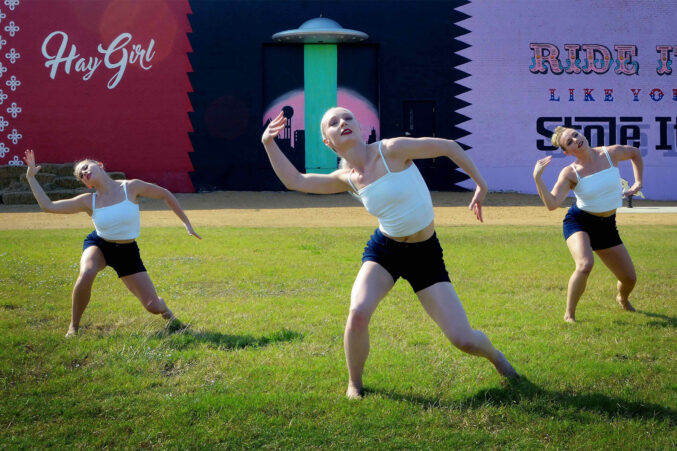 Commissioned choreographer Jonathan Campbell says he was very much in love when he created this piece. It is a sweet, playful romp through idioms and tropes of love, set in the open space of a field, a vacant lot between buildings.

Flirty and whimsical, the filming harkens to classics like West Side Story and Grease, set to the ‘60s hit that gives the piece its title by The Supremes. The whole is a quirky interlude, a light-hearted romp that feels like it’s an episode of something longer. The dancers are running through a field, “overwhelmed or overjoyed” by love. Campbell wanted to capture “the messiness of love or the beginning of a relationship. It’s wild, it’s new, it’s silly sometimes.” The piece delivers a sweet, zany serenade that says the world is made for lovers. Or, for those not in puppy-love, a tender, wistful, poignant promise—personally or globally—that we’ll get to that place, the mythical meadow, where “Everything will be just as wonderful.” 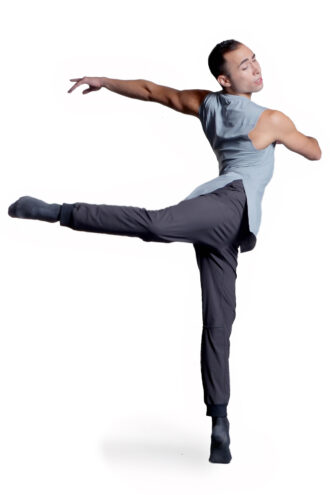 In Know Thyself, artistic director Joy Bollinger re-stages a Bruce Wood piece. She was aware, she says, of the camera as another dancer and the possibilities of staging provided by the medium of film.

“What would be a good location for this, and how could we have a setting and visuals and cinematography that would support what’s already present in this choreography—that would support the feeling?” Wood himself had been interested in creating a dance film and had mentioned this to The Digibees. This, then, is a testament to the company’s tenacity, an homage to Wood, and a literal, technical shifting or moving forward. It is a way of honoring that wish.

The challenges of Nikaidoh’s piece stem from the difficulty of rehearsing a full-company work via Zoom. In other words, the complexity of traveling formations and the intricate layering they entail are all seen through a screen by Nikaidoh, the company’s former artistic director, who directed rehearsals from her home in Santa Monica. As dancers overlap, Nikaidoh had to rely on a combination of viewpoints, including studio mirrors. This creates a sense of depth that demonstrates the trickiness of virtually choreographing ensemble work. 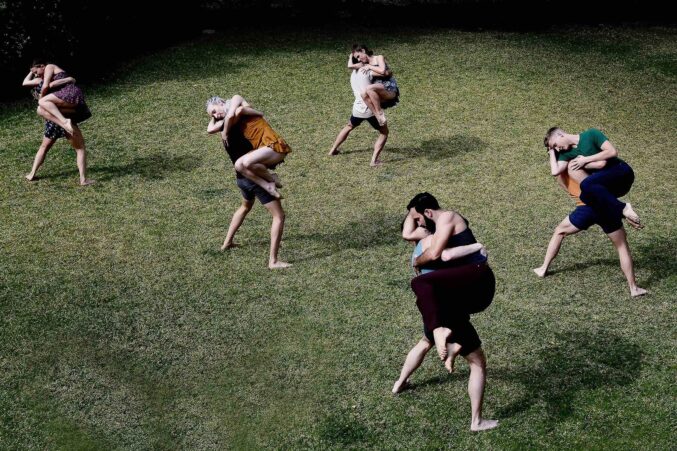 The piece leads with the question: “What happens when we look at the moments of joy and hope in our lives?” What unfolds is a mesmerizing work that bears all the hallmarks of Nikaidoh’s graceful, lyrical style—a graceful dream that turns out to be a reverie. Nikaidoh hopes the answer is, as she says, that “hope moves us in the direction of what we yearn for collectively.” The result: a quiet celebration of the beauty we can conjure every day.

Artistic director Joy Bollinger envisioned this piece as a thank you “to patrons, to frontline workers, to supporters of the arts who dug deep”—that is, to all those who deserve grace. What results is a grace-note that bears gravitas and a sense of gratitude.

These works, captured as film, will be able to live on. “I think that’s what’s going to be really special about these works,” Bollinger says.