Over the past few weeks, every day seems to bring more murals popping up across Dallas. Each has its own origin story, whether plastered on plywood or at the graffiti art park Fabrication Yard. Some artists have made their messages impossible to ignore. Others want you to interpret their work yourself. Collectively, they tell the tale of Dallas’ resilience, propped up by pillars of community support.

When businesses throughout Dallas began covering their broken windows after a night of protests turned violent on May 30, mural painter Isaac “IZK” Davies envisioned a way to connect the DFW art community with a sudden boom of blank canvases. “When everything was shut down and then the protests started happening, there was just like an extra layer of feeling the need to do art to activate some response,” Davies says.

On June 1, Davies created a Facebook group dubbed the Dallas Army of Artists. He invited other community leaders to serve as administrators for the page, including real estate developer Tanya Ragan. She would act as a liaison between the artists and businesses who might be persuaded to offer up a blank wall. 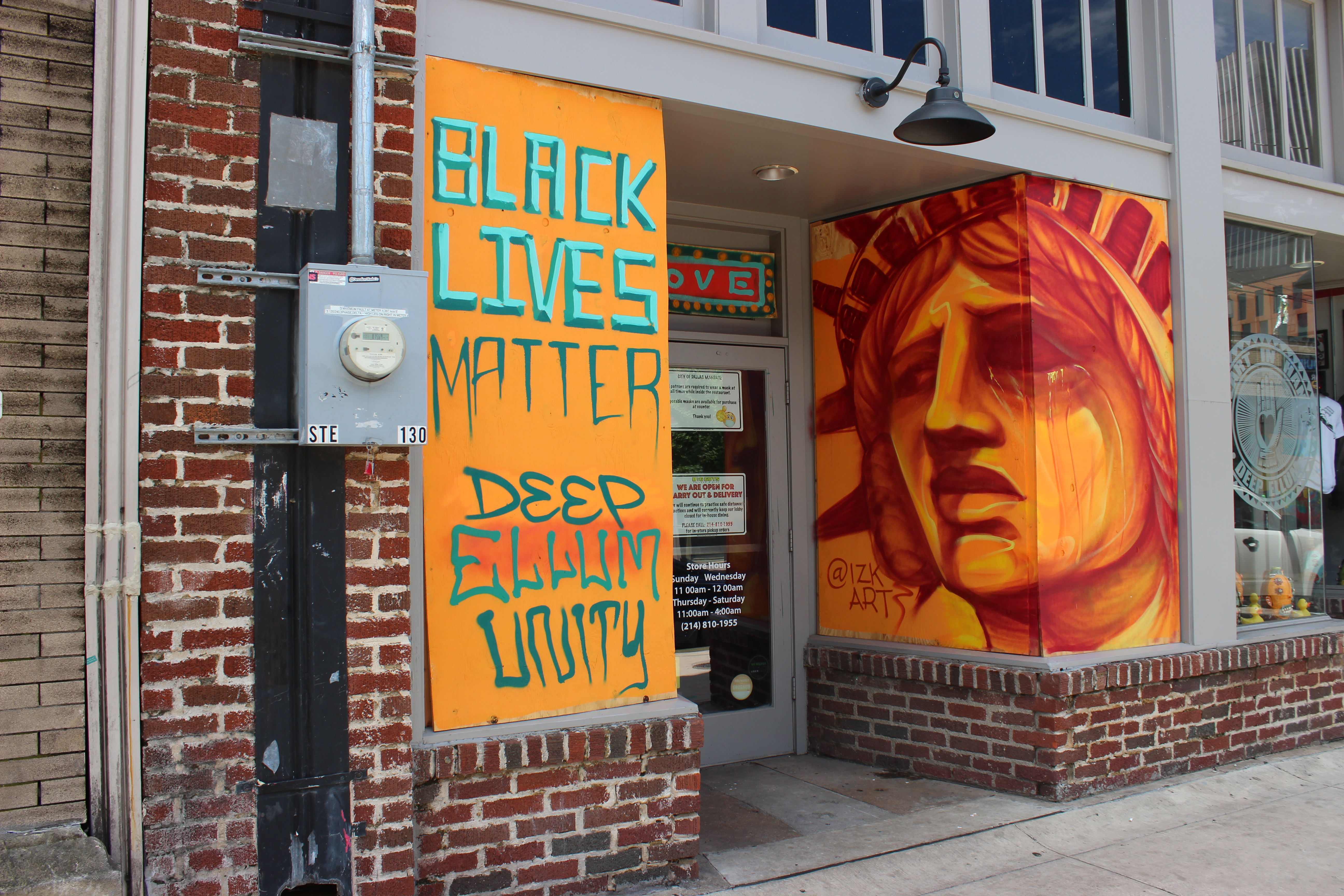 Davies set a goal of 100 artists to join the group. They reached that goal in the first 24 hours. Within the first 10 days, they put up 50 murals. Now, the group has over 500 members. “It just organically took off like a freaking speed train,” Ragan says.

Non-artist volunteers coordinated to donate art supplies and distribute beverages. As the murals proliferated throughout downtown, Heather Randolph Davis made a Google map of the sites, complete with photos of the murals. Andrea Perez, a senior associate at Carrington Coleman who specializes in art law, offered pro bono services to any artists who ran into trouble. Luckily, no one has needed the help thus far. Plus, Perez says many artists aren’t likely to have issues since they’re painting on temporary structures and often receiving permission.

“I think that what they’re doing right now is brilliant,” Perez says. “When horrible things happen, I feel like the artists are the first ones to step in and try to find a silver lining or try to bring people together, so it’s nice to see that they’re doing that.”

Davies added another longtime Dallas artist and friend, Theo Ponchaveli, to the group. While Ponchaveli’s support of the Army of Artists mainly happened by amplifying their posts on his own social media platform, he made his solo contributions to visual protests against injustice at Fabrication Yard.

Ponchaveli’s two murals feature the faces of George Floyd and Ahmaud Arbery. Non-commissioned works like those are more spur-of-the-moment for Ponchaveli. “Something may happen today and I wake up in the middle of the night and start it, so I’m pretty sure that the last two that I painted aren’t the last,” Ponchaveli says.

Another lone wolf, Gabriel Thomas has left his mark on Dallas. Even before protests happened in Dallas, Thomas graced plywood coverings of shops closed due to COVID-19 with scenes drenched in his typical colorful hues.

On May 29, Thomas painted four portraits in front of the shuttered Glazed Donut Works, unaware of the protests that would erupt later that weekend. The faces, emerging in black-and-white detailing out of monochromatic squares, depict four Black people who died at the hands of police–George Floyd, Jordan Edwards, Atatiana Jefferson, and Botham Jean. All except Floyd were killed in North Texas. The images and their timely message were widely shared on social media.

Since then, Thomas has put up a plethora of paintings across Dallas, often accompanied by quotes from the likes of John F. Kennedy and Tupac Shakur. “These ideas come straight from my soul,” Thomas said. “This is something that’s embedded in me to be uprising against oppression. That’s something that’s in my blood.”

Contemporary painter Desireé Vaniecia went in a different direction with her mural. Rather than depicting a specific person, she illustrated the figure of a bold but nameless woman across the plywood covering a friend’s house. The image is emblazoned with a cry to “lift every voice,” which echoes a refrain from the Black national anthem “Lift Every Voice and Sing,” along with names of those lost to police brutality and racist violence.

Vaniecia expressed how this moment has differed from past cries for change. “I guess I’m elated in a sense because it’s like all these years of screaming at a brick wall that the things that are happening are unjust to our people [and] are unjust to how we are able to function through society, people are finally hearing it,” Vaniecia says. “But as a mom to a three-year-old little boy, I’m scared still.” 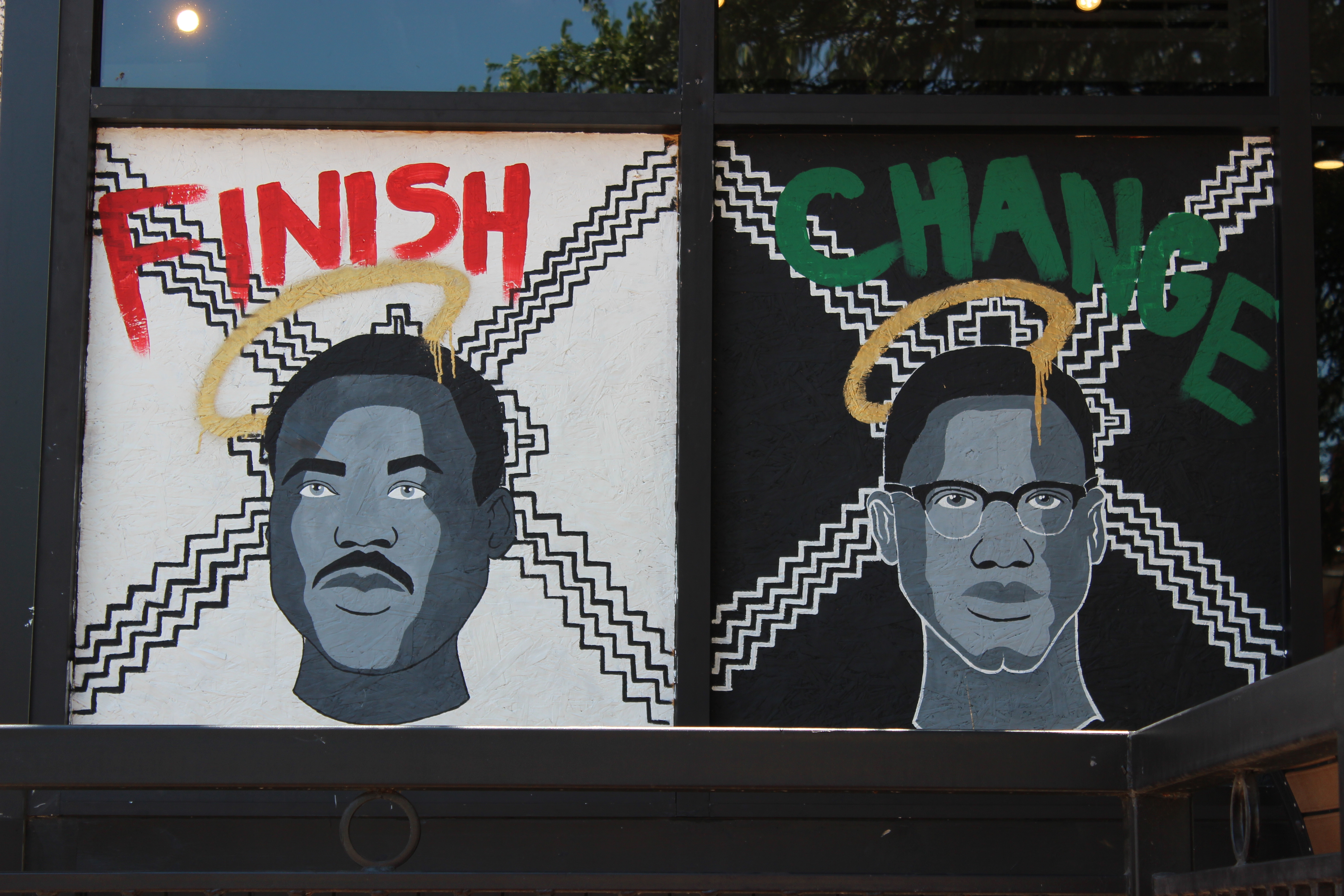 Artist and El Centro College student Victoria Simmons put together an event on her own to help people to feel safe, process their emotions, and have a community dialogue following the night that protests turned violent. Outfitted with art supplies and buckets of paint, Simmons invited people to Fabrication Yard. They painted both a larger mural memorializing eight people and a blank wall with just a Pan-African flag where people could write what was on their mind.

A few days later, the mural was defaced. An X covered each face and a long squiggle obscured the rest of the painting. While artists at Fabrication Yard often do their work on top of pre-existing pieces, this was clearly not a new painting.

Simmons says she expected that kind of backlash. “I knew if other people saw that after they did that, it would also draw attention and itself become a new piece of art,” Simmons says. “[It] shows this is the state of our reality. This is where our culture is now. People purposely can deface something like this, that’s this heavy, and have no remorse. And it’s an example of what’s really going on.”

Simmons also collaborated with the Dallas Army of Artists to paint the boards at Y.O. Ranch Steakhouse and BurgerIM. Wes Williams, the owner of BurgerIM (the only Black-owned bar and restaurant in the West End) and a Dallas firefighter, stopped to ask Simmons if she could paint the boards covering up broken windows at his restaurant while she was out painting. Within a day, Simmons adorned Williams’ windows with the portraits of Martin Luther King Jr. and Malcolm X. 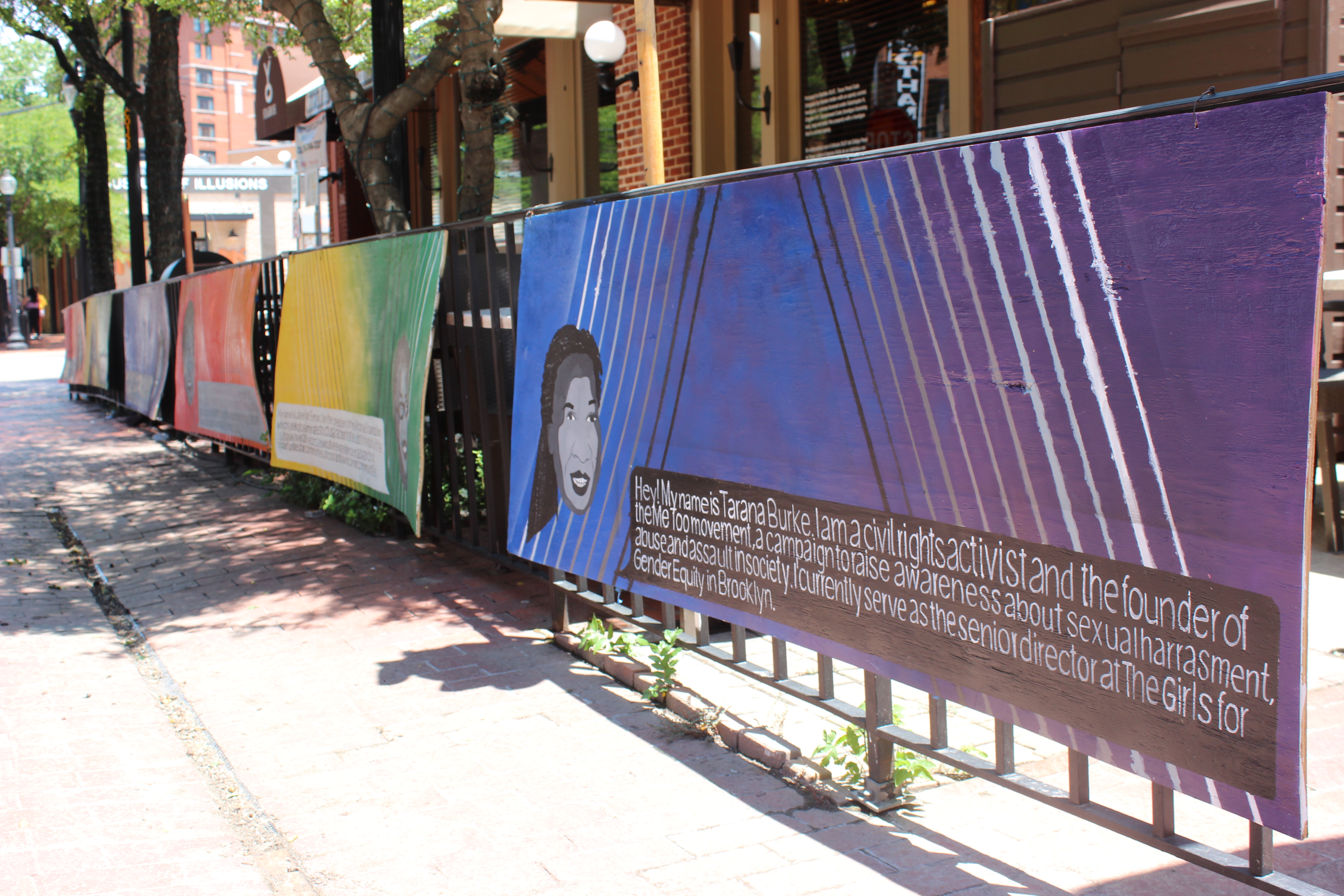 To Williams, the images represent two men whom history remembers for starkly different approaches to equality, but found more common ground toward the end of their lives. “In the grand scheme of things, both sides are really just trying to reach a common goal, and that’s just for the betterment of the Black culture,” Williams said.

With the new mural, Williams has decided to hold off on repairing the windows for a little bit longer. Once they’re replaced, Williams plans on hanging the paintings in his restaurant, perhaps eventually auctioning them off for charity. First, however, the paintings will likely be part of an exhibit showcasing the murals erected in the wake of protests.

Davies is working with Downtown Dallas Inc. to put together an outdoor exhibit. The organization Deep Ellum 100 is trying to find venues that would be big enough to host the sheer volume of paintings. The Army of Artists’ Facebook page posted a disclaimer that “all art will be a donation to the businesses that were impacted.” Tuttas Pizza already hosted a virtual silent auction for their pieces.

The main goal is for the murals to continue to support the community, and they already have. People have come to peruse the murals on walking, driving, and even biking tours, bringing additional traffic to the local businesses in a time when fewer people are going out.

“Seeing what’s happened in the last two weeks… has just been incredibly uplifting at a really strange time,” Ragan said. “You see all walks of life. You see all races. You see all different kinds of messages, but what they have unified is that they are hopeful [and] that they are supportive. There’s a lot of love, and I’ve just seen an incredible amount of support.”